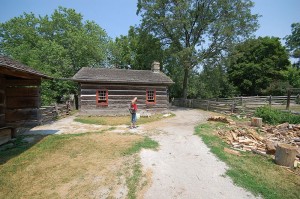 Last Wednesday evening, educators from across the Greater Toronto Area (and beyond) gathered at Black Creek Pioneer Village for the inaugural event in the broader Approaching the Past workshop series (co-sponsored by The HistoryEducation Network [THEN/HiER] and ActiveHistory.ca). I post this here for several reasons: firstly, those who couldn’t make the event can learn what they missed (and hopefully come out for the next workshop on 30 September); and secondly, because it sheds light on both public history and teaching skills.

Led by Ruth Sandwell, a professor from the Ontario Institute of Studies in Education, the evening was very much participant driven. After a brief introductory speech by Sandwell which explored the various ways that we teach history, the group moved out into Pioneer Village.

Focusing on two buildings in the Stong Homestead [photo above is licensed via Creative Commons], the only part of Black Creek Pioneer Village that was originally located there (the remainder of the buildings were relocated from scattered locations nearby throughout the 1960s, 70s, and 80s), groups got a brief introductory note from Black Creek historian Wendy Rowney. It was fun gathering around in the old homestead, learning about the site from a historical perspective (both the objects and the curatorial decisions) – it was even interesting enough that we attracted a nearby groundhog who seemed interested in the affair.

It really struck me how difficult it must be to teach history to their target audience of Grade 3 students, which is when many school groups come thanks to the Ontario curriculum (full disclosure: I think the last time I’d been at Black Creek was in grade 3). What concepts need to be simplified? What items do they need to highlight to capture their attention? Even the very idea of a ‘Pioneer Village’ is somewhat constructed: most of the buildings on the site aren’t being used for their original purposes. As Wendy points out, there’s not enough homes, etc. But people want to see the cooper’s house, the saddlemaker, etc. – and they certainly serve a valuable educational purpose! One interesting vignette was that the print shop at Black Creek was actually originally a Temperance Hall – but in the context of the sixties, nobody cared out temperance.

Inside the houses, we split into groups and undertook some awesome activities. Groups of two had to select an object from an array of suggested items – from spinning wheels, to the hearth of the original 1816 home, to a butter churn, to an old iron, to quilts. Then came the fun: two sets of questions, aimed at different dimensions of an object. First, what could you learn from the object itself: who created it (and how would you know)? Why was it created? Who would have used it? Why was it preserved, both historically but also as a curatorial decision? Secondly, we had to explore whose work might be represented in it? Could we tell anything about social relations? What value would it have in the museum? What could we learn about the mid-20th century, when the Village was set up, from this?

After convening, fascinating things came up. Craig Heron noted the mid-20th century rage for spinning wheels, how they would find places in even the most modern of living rooms, and how that might have influenced the prominent location of the object within the museum. Jay Young, one of our co-editors here at Active History, raised the fascinating point about how Black Creek was built around the time of transformation, just after the creation of Metropolitan Toronto – Black Creek, situated right at the edge of Metro, was transforming from rural land to suburban land within a large municipal agglomeration. A great discussion was started about needs vs. wants, centred around the iron. Did the presence of the iron symbolize that all the bare necessities had been met, and the family could now engage? Or was it a symbol of respectability, of wanting to move up socially despite material impoverishment? How common were irons?

It was a great discussion, and I think got us thinking a lot about the role of material objects, public history, and how we could use these concepts to enrich our own teaching. It was unfortunate, however, that more elementary and secondary teachers weren’t able to attend: as far as I could tell, the participants were all from the post-secondary realm. June, of course, is a nasty time of year for many teachers, and hopefully they’ll be able to attend the next event in September, who is being held on 30 September, 7pm, at Montgomery’s Inn (near Dundas/Islington, a short hop from the Islington Subway station). It’ll be about teaching history with food, so it sounds both yummy and insightful. Details will be coming soon, and will surely appear on this site.