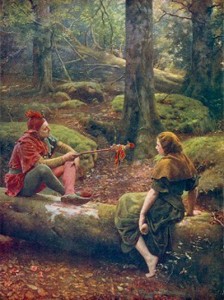 Performance is an important theoretical concept in the history classroom.  It has been deployed in various contexts, from a social historian’s concern with the ‘public transcript’ of the theatre of the dominant classes, and its counter-theatre of resistance, to cultural and gender historians’ readings of ‘performativity,’ wherein the cultural fictions of collectively performed gender produce and reinforce prevailing notions of normalcy.  E.P. Thomspon and Judith Butler have influenced a number of historians with their respective conceptualizations of theatre and performance, and so have had a significant impact on the production of historical scholarship.  These ideas, inspiring as they are, can be heavy theoretical baggage to unpack in the undergraduate history classroom.

Theatre and performance in practice seem to play a less important role informing history teaching.  I was thus pleasantly surprised by my first encounter with this as a teaching assistant for Professor Marcel Martel’s Canadian history course at York University.  One of only many creative strategies Professor Martel employs in his lectures is ‘witnesses from the past’.  Volunteer TAs act out historical roles while Professor Martel interviews them about their lives and the times in which they lived.

Students invariably waxed poetic about this aspect of lectures, and many engaged with this material the most enthusiastically.  Judging by the frequency with which this information turned up on reviews, tests and exams, these were also clearly among the most memorable aspects of lectures, as well.

Another unanticipated benefit was the lively and fun tutorials that followed my own performances of ‘witnesses from the past’ – many students began spontaneously role-playing during discussions and debates, enacting what they felt historical actors might say and do, based on the knowledge they had gained from the readings.  As one example, a debate was staged in lecture over prohibition, and students afterwards voted on the legality of alcohol (this became an especially vivid learning lesson when they were first informed that only property-owning males could vote).  Discussing prohibition later in tutorial, students eagerly continued the debate, voicing all the main arguments from the wet and dry side, expressing an enthusiasm over the reading material than I had rarely witnessed.  The same held true for most topics illustrated through performance.

I have since tried to work theatre and performance into some of my tutorials each year, and I have yet to be disappointed with the results.  When I first ask students to design and perform a skit in small groups that captures the essence of the assigned readings, I’m often greeted with some groaning and complaints.  But by the end of the exercise, a wave of enthusiasm has gripped the group, while gales of laughter punctuate many of the main points being drawn.  Even the most ardent naysayers often concede to having enjoyed themselves in the end.

As a TA in Professor Craig Heron’s The Working Class in Canadian Society this year, I will be able to continue exploring theatre and performance in the classroom; one of the course assignments requires small groups of students to design a Workers’ Heritage Moment which they will then perform during a lecture.  Some are expressing terror at having to speak in front of over one hundred of their peers; at the same time, many are encountering the influence of Thompson’s Customs in Common for the first time, showing an equal amount of grief over what historians mean when they deploy terms like ‘counter-theatre of resistance’.  Of course, there is not always a clear link between theory and practise; the work of Judith Butler and E.P. Thompson will not necessarily become clearer through the act of performing.  But with quick and creative thinking, educators can seize opportunities like this to highlight some tangible links between theory and practice, leading to important – and fun – learning lessons.