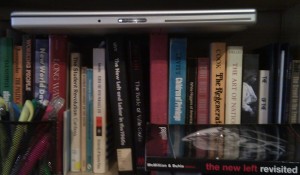 Do laptops have a place in the lecture hall? An ongoing debate has raged over whether they do. At York University, the on-campus newspaper Excalibur noted that many history professors were opposed to the use of laptops in lecture halls, a discussion continued by a large departmental meeting in early January. This has not been an isolated discussion, however. In this post, I hope to provide some background to the debate by noting some of the other sites of discussion, and then break it down into what I see as the two main issues: civility and the role of the professor, as well as learning and the role of technology. Keeping this in mind, I believe that we need to reframe our teaching approach as adult education and adapt to the use of technology. Certainly, there will be times when we should close our laptops and enter into discussion, but this does not need to lead to a blanket ban of technology in our classrooms.

As wireless internet became widespread across university campuses during the early years of the millennia, different approaches appeared. Some universities, like Acadia, had already incorporated technology into almost all of their teaching through the Acadia Advantage programme (begun in 1996). Others, however, began banning these tools as distractions (as a 2003 article from the University of Saskatchewan indicates).

Lately, however, it seems to be reappearing as a serious issue. A debate played out on the GlobeCampus blog, inspired by a London Free Press article about debates at the University of Western Ontario. In University Affairs, Fred Donnelly argued that laptops heralded a return to pre-industrial notions of multitasking – factory masters imposed strict single-tasking work regimes – and should not be flatly dismissed. This earned a derisive response from Todd Pettigrew at Macleans.ca On Campus, snorting that “while professors pat themselves on the back for being in touch and progressive, for creating a dynamic new learning environment, they are really creating an environment of increased contempt for learning and study.”

This post is focused on lecture-format instruction, rather than group work or one-on-one interaction. In this case, I feel that one of the main issues is the idea of civility and the role of the professor. Who controls the agenda in the classroom? Do we have a moral obligation towards our students – making them into ‘book-centric’ agents, strengthening their attention spans? Crucially, however, do they need to ‘mind their manners’? Do they owe it to the instructor to provide their full and undivided attention? What degree of control do course instructors and teaching assistants have over their students?

Certainly, instructors have the obligation to ensure an amendable learning environment for all. Students cannot loudly speak during lectures, as this disrupts their peers’ ability to learn. Similarly, they should not watch live-stream videos: be it NHL games, TV shows, movies, YouTube videos, etc, nor can they play video games, manage their online farms, or other such active, moving image-heavy activities. These colourful interventions draw the eye towards them and are a flashpoint for intra-student conflict. If they’re ensuring an amenable learning environment for all, professors also need to allow students with learning disabilities access to laptop computers (and the solution of banning all but those with registered learning disabilities strikes me as discriminatory and uncomfortable).

However, unobtrusively checking one’s e-mail, catching up on a quick update of how badly the Leafs are losing, or thumbing through a few BlackBerry messages is arguably different. They are less visibly stimulating, more passive (although a valid point can be made that online advertisements are becoming increasingly irritating), and I feel that they are not unduly disruptive to peers. Indeed, if some peers are distracted by this, that’s part of an issue they’ll have to deal with as they move through academic, corporate or non-profit worlds. I understand that this may be a point of contention – and I am, to some degree, making a value judgment that privileges certain kinds of activities over others. In my mind, in any case, the debate shifts from intra-student to the dynamics of student-professor respect. Do professors deserve respect from their positions alone, or does this need to be earned? Do they have an educational role beyond that of subject matter expert: are they teaching students to be ‘good, respectful citizens’ – beyond the content of their history course?

A moral responsibility towards students has long been a factor in the modern university, harkening back to the heady days of ‘in loco parentis’ (in place of the parent): women subject to curfews, same-sex dormitories, severe restrictions over reproductive rights, control over course selection, prohibiting off-campus activities and an array of political and intellectual speech. Much of this was dismantled in the 1960s through student protest and the active engagement of student governments, although small relics live on here and there. I think the laptop debate contains a moral dimension.

Yet, to me, the key point is that we are providing adult education. Students may seem young at the age of 18, but they’re now able to vote, be deployed overseas with the Forces, sign contracts and all of the trappings of legal adulthood. They are making a tremendous financial and personal sacrifice to attend university, an increasingly expensive proposition with increasingly dwindling outcomes. To support this, they’re working hours upon hours at part-time jobs, balancing interpersonal relationships, romances, family obligations, among others. A liberal arts education is about more than cost-benefit analyses, but we need to accept that students are autonomous agents with the ability to manage their own time. If they’re not disturbing other students in the class, why not let them use their laptops? Leadership and respect are transformative and earned processes.

Secondly, do laptops enhance or detract from the overall educational experience? They can draw students out of the classroom, lead to some disengagement, and are indisputable sources of some personal distraction (just as newspapers, doodling, daydreaming, editing papers for other courses, or concocting elaborate lecture hall related games). Yet for others, they let them delve deeper into a point raised in lecture, run down primary documents, take exquisitely organized notes, double-check moments when the professor might seem uncertain, and other tasks. Lest you raise an incredulous eyebrow, every single example provided here occurred in the last semester of the course I’m TAing at York. Laptops can also transform the isolated island of the lecture hall into a significant node in a broader network of knowledge. A recent study in a Calgary high school also demonstrated that “computer technology can dramatically improve the way students learn — but only if coupled with engaged teaching.”

We need to further incorporate computers into our teaching and learning processes. A survey of my undergraduate class demonstrated that all had access to a computer. Not all will have the same capabilities, however, and we do need to watch out for creating a ‘classed’ student experience where only some students can afford the latest and greatest technologies. As one student observed during our recent departmental meeting, they’re now all encouraged to buy laptops when entering the program at considerable financial cost. They now have a tool at their hand that can potentially:

In the course that I teach with, we’ve launched a course twitter feed. We hope that during the lectures, students will tweet questions and reactions, creating a conversation that can exist politely alongside the master narrative provided by the course director. Then, at the mid-class break, a teaching assistant will summarize the online reaction and use that as a launchpad for a quick discussion or issues to be further developed in tutorial. Who knows if it will be successful, but we need to try. Many of our students know more about this stuff than we do, and we can learn from them.

6 thoughts on “Laptops in the Classroom”