A major drought of unknown intensity and duration is about to hit the Oxbow Basin in Canada. With a population of about three million people over a landbase of 175,000 square kilometers devoted primarily to agriculture, water management will consume all levels of governance, from the farmstead to the largest city.

What are you going to do?

Send members of the University of Saskatchewan’s Global Institute for Water Security and the School of Environment and Sustainability into action! And oh yes — include an environmental historian.

Recognize the Oxbow Basin? It is a fictional place, created for the recent Invitational Drought Tournament sponsored by Agriculture and Agri-Food Canada on March 2, 2012 in Saskatoon. What, you might ask, is a drought tournament? A new card game? A new version of The Farming Game [TM]? Well, not yet, but something interesting is certainly growing.

The Invitational Drought Tournament is a new, interactive game tool, “designed to help institutions build their capacity around drought preparedness” (Agriculture and Agri-Food Canada 2012). Part workshop, part competition, the idea was to bring (ideally) multi-disciplinary teams into one room in a game format. Five University teams from Alberta, Saskatchewan, and Manitoba competed in the event. Working with both existing drought mitigation options and creating new adaptations, the drought tournament was a fun venue to try to identify gaps and vulnerabilities in drought preparedness.

The room was filled with experts: climate change scientists, hydrologists, water modellers, soil scientists, policy analysts, engineers, economists… and the list goes on. David Sauchyn, well known in environmental and drought circles for his proxy tree ring research, brought an impressive group from Regina. Two teams from the University of Alberta complemented a group from the University of Manitoba – who candidly stated that if this had been a flood tournament, they would have wiped the floor with us. True enough. No one knows flood like Manitoba.

What was a historian doing there? I asked myself the same question – especially after I became the U of S team captain. But as an environmental historian who studies drought and flood events (and owns a farm, to boot), there was a space for me. I knew both the context (past drought events) and the on-the-ground implications of agricultural drought mitigation decisions. 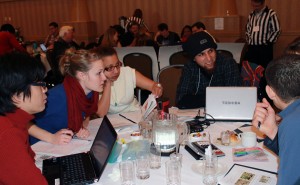 The energy and research put into the game by its creators is extraordinary. Past extreme climate events – and yes, the Dirty Thirties certainly topped the list – were balanced with information on risk assessment, stream flow and water storage, regional characteristics of the fictitious basin, temperature and precipitation tables, and existing adaptation options from which we could choose.

I was humbled by my team. With players from the global south, the middle east, Israel, the far east and Canada, the U of S drew experience and innovative ideas from around the world. My team had put weeks of work into building scenarios, constructing models to predict the impact of drought on the overall water supply in the basin, economic potentials and drawbacks, and social stress on the system. I was lost. And I was enormously impressed. 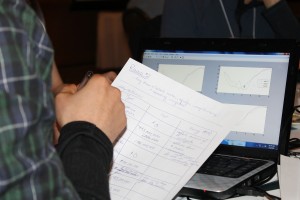 University of Saskatchewan Round #2 drought adaptions and modeling

The drought tournament was an opportunity to work with others in a truly multi-disciplinary (and incredibly fast-paced) team environment. With the time clock ticking, negotiating and selecting short and long-term water, land, and financial management options and technological innovations left little time for exploratory discussion or debate. The game went through three years of intensifying drought.

We also opted to create some social innovations. Would you like to come to the Rain Dance we organized with the local Grand Council of the regional aboriginal reserves? With the lakes drying up and tourism plummeting, we all need something fun to look forward to. And how do you know – it might even work!

After the judges scored the overall results, the U of S team took top prize.

What is the point of all this, besides telling you about a fun day?

Increasingly, I see a shift within academia and governmental policy. While positivist natural science and qualitative social science methods are still fundamental to research streams, humanistic skills and perspectives are budging in, too. More and more, large multi- or inter- or trans-disciplinary teams are looking for the skills that historians bring to the table: document analysis; the ability to track landscapes over time and relate it to human dimensions of environmental change; and (I’m told) our ability to synthesize knowledge.

A sense of humour, some imagination, and a willingness to reach out helps, too. 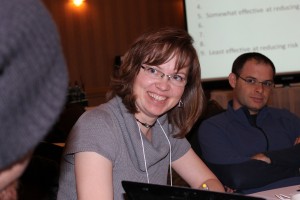 I know that as an environmental historian, I’m a bit like a magpie: I find all kinds of neat, shiny bits of information from anthropology and archaeology, ecology, hydrology, geography, geology, soil science, economics, government reports, traditional knowledge, photographs, maps, and archival research and put it all together to create a more holistic picture of whatever it is I’m studying. What others consider “context” is my data!

In terms of the Invitational Drought Tournament game, the U of S team – like all the others – offered their multi-disciplinary backgrounds and perspectives not only to the day and the Saskatoon event, but to the game itself. We suggested a host of ways for the game to be improved for future iterations. Ultimately, the game will become a tool that multiple governance systems and levels can use to identify and mitigate extreme climate events.

Because extreme events will happen. Let’s work together, pooling all of our talents and expertise, to identify and rectify the gaps, and suggest positive innovations, while we can.