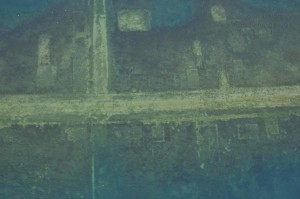 A picture might be worth a thousand words; but great photos combined with a hundred thousand words can be even more powerful. And that’s what this post is about: the power of photography and art, doing history, and the benefits of collaboration.

The subject of my doctoral dissertation, finished almost two years, was the creation of the St. Lawrence Seaway and Power Project. I’ve been revising and expanding it, and it is getting close to publication as a book. I’ve published on and talked about the creation of this megaproject in multiple forums. Basically, I have a lot to say about it.

Sometimes the historian’s dream happens, and people actually want to hear what I have to say (you know, you give your canned 20-second summary of what you do … and then they want more!) Of course, that isn’t always the reaction, so if I really want to get people interested in the topic, I tell them about the Lost Villages (the communities relocated because of the flooding waters of the St. Lawrence Seaway and Power Project in the 1950s) and show them some of Louis Helbig’s photography.

Louis is best known for his aerial art photography. He has done work on environmental topics such as the Alberta tar sands, but it is his Sunken Villages exhibit, which features stunning photos of the submerged remains of the Lost Villages, which directly connects with my work: http://www.sunkenvillages.ca/

Louis and I met a few years back at a meeting of the Lost Villages Historical Society (LVHS). Louis, who is also based in Ottawa, told me about how he had stumbled upon the Lost Villages as a photographic option when returning from aerially shooting protests at the Akwesasne Mohawk reserve. We immediately hit if off because of our shared interest. 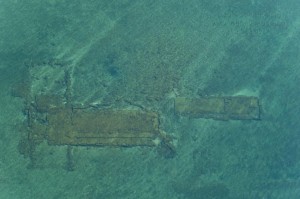 While our collaboration isn’t an unlikely stretch – Louis has an MSC in Economic History from the London School of Economics and I have a background in film and photography (e.g. I was a documentarian between my M.A. and Ph.D.) – we are operating in rather different contexts and forums.

Louis writes that “the reappearance of the Lost Villages – an intended consequence of the Seaway project – in ethereal, blue green water, only recently clarified by the zebra mussel – an unintended consequence of the same – is the kind of confluence of art, science, fact, history, and culture that any imaginative practitioner in the derivate disciplines – artist, scientist, historian or social commentator – could normally only dream about.  I was ‘just an artist’ and not at all an historian in responding to the shapes and forms of what is left of what once were the homes and communities of 6,500 people. But, as art, they are animated and animate the imagination, and from there is little limit to how one can unpack them, think about them, understand them.”

Our collaboration includes brainstorming and helping each other make sense of the Lost Villages experience. His photographs have helped me physically locate places in the river and better conceptualize – on a number of levels – what I’m dealing with. He literally provides the birds-eye view that is easy to lose sight of when one is immersed in the nitty-gritty, minute, on-the-ground details of how much one person received for their house. And he is allowing me to use his photography (pro bono) for my book!

And the benefits are reciprocal. According to Louis, “after meeting at the LVHS and over a few beer in ‘Grumpy’s’ pub in Long Sault – one of the planned towns – that absorbed several of the Lost Villages, Daniel started telling me about his dissertation, a stream of narrative and fact, explaining and adding layer after layer of understanding and meaning to my green-blue interpretations of the remains of Aultsville, Wales, Farran’s Point, and the other communities. As we leaned in conversation across the table over our beers, I realized in fact, what I suppose I probably already knew by instinct: his scholarship reinforced what I had begun to comprehend from what the survivors of the Lost Villages were telling me, that these villages tell us a whole lot about ourselves not just then but now, as all good history does.” 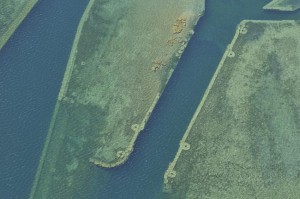 Louis and I are trying to take our collaboration even further. We are applying for funds to create a multi-site public exhibition of Sunken Villages images throughout the Seaway Valley featuring an interactive component. This means that we hope to mount installations along the St. Lawrence, with photographs of foundations from nearby sites. History and contextual information will be provided, through text and potentially via smart phones. We hope that visitors will be able to scan QR codes in order to hear the voice of former Lost Villages, such as those that I interviewed for my research.

I have no doubts that Louis’s photographs are more immediately accessible and captivating than my writing on the Seaway. People gravitate towards his images, and hopefully that draws them toward learning more about the history, the people, and  communities behind these images. That is the power of art, history (public and academic), and community when they are all brought together, more relevant and meaningful than just any on their own.