An earlier version of post originally appeared on the author’s blog Actually History.

In 1814, an Irish fur-trader in the employ of the Northwest Company by the name of Ross Cox was conducting business with Indigenous people near present day Spokane, Washington when he encountered, in his eyes, a remarkable individual.  In his journal under the titillating heading of  “A Curious Account of a Hermaphroditic Chief”, Cox described this person as,

A remarkable being.  The Indians allege he belongs to the epicene gender.  He wears a woman’s dress, overloaded with a profusion of beads, thimbles and small shells; add to which, the upper part of the face and the manner of wearing the hair are quite feminine; but these appearances are more than counterbalanced by a rough beard, and a masculine tone of voice.

Cox’s encounter with this “hermaphrodite chief” is just one of several known interactions between male fur-traders and people who are often referred to today as “third gendered” in the 18th and 19th century fur-trade in the Pacific Northwest.  People of a “third gender” in North American Indigenous societies were men and women whose gendered work roles, styles of dress, and behaviours did not accord in some degree to what was expected of someone of their biological sex.  Today, they might identify as a “transgendered person” or perhaps “intersexed.”  In terms of sexual orientation, third gendered people could be attracted to members of the same sex, but not necessarily.  Of course, it does not really make sense to speak literally of “same-sex” attraction within a non-dualistic gender/sex system.

In this short article, I shed light on a few of these moments of encounter that have not been lost to history.  As we might expect, some interactions followed the standard script of colonialism – male fur-traders heaped disdain and sometimes violence upon third gender Indigenous people.  These interactions resulted from an ideological context of imperialism in which Indigenous people were doubly stigmatized – once for being Indigenous and once for being third gendered.  Yet there were notable exceptions to a pattern of violence, like that of Ross Cox narrated above.  In these cases, European male fur-traders not only tolerated third gendered Indigenous people; they showed them a degree of respect in their writings and interactions.  Accounting for the respectful nature of some interactions in this period proves a much more difficult task.

Getting our terms straight
If historical Indigenous people of a “third gender” were dropped into our present moment, they might identify as some combination of “two-spirited,” “transgendered,” “transsexual,” “gay/lesbian,” “bi,” “straight” or “queer.”  Simply referring to historical Indigenous people in this fashion, however, would be anachronistic because these social categories did not exist in Indigenous societies of the past.  Rather, Indigenous societies had their own unique and diverse set of social categories through which they understood and performed human gender and sexuality. 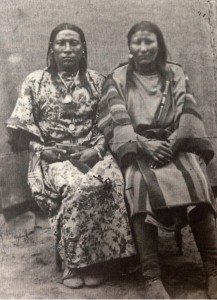 Pictured in this photograph is Osh-Tisch (left), a Crow “Boté”, which can be loosely translated as a “transgendered person” in our contemporary understanding. Osh-Tisch was an artist, medicine person and warrior amongst his people.
Photograph taken by John H. Fouch at Fort Keough, Montana Territory in 1877. From Roscoe, Third and Fourth Genders in Native North America (New York: St. Martin’s Griffin, 2000), 33.

Despite the different social categories Indigenous societies used to explain human gender and sexuality, continuity in non-normative gender and sexual behaviour spans across all of human history.  We can therefore speak about “LGBT” historical native people, if the use of this contemporary term emphasizes continuity in non-gender and non-sexual normative behaviour throughout history, rather than an inaccurate projection of a present-day understanding of sexuality and gender on to historical individuals who would never have understood their own experience through the concept of “LBGT.”

Here, I have used Indigenous terminology to describe “non-normative” gender and sexuality behaviour when possible.  When Indigenous terms are unavailable, or when speaking in general about several groups of native people, I employ the contemporary term “LGBT” in a loose sense as a catch all term to describe Indigenous people of a “third gender.”  I also sometimes refer to historical Indigenous people as “gay,” “lesbian,” “transgendered person” or some other contemporary category of sexuality and gender.  My usage of these latter terms is deliberately anachronistic as a way to playfully and strategically emphasize the continuity of “non-normative” gender and sexuality behaviours throughout all of history.

European Encounters
Europeans had encountered LBGT Indigenous people since the early days of colonial conquest in North America.  From the 15th to the 17th century, Europeans employed a plethora of terms — many carrying pejorative connotations — to describe LBGT native people.  They were called sodomites, hermaphrodites, berdaches, amazons or garcons effeminés (effeminate boys) in European texts.  Many European observers dismissed native gender and sexuality practices as obvious proof of the savagery of Indigenous people.  Encounters were at times violent.  When the Spaniard Vasco Nunez de Balboa encountered forty LBGT Indigenous people in Panama in the early 16th century, he had them killed by a pack of dogs, in what was one of the first cases of violence against gay people committed by a European in North America. 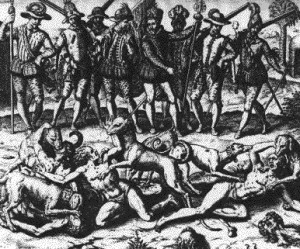 Homophobic violence was equally a part of interactions between fur-traders and LBGT native peoples in the Pacific Northwest fur-trade of the 18th and 19th centuries.  In one known instance, sailors working for the Hudson’s Bay Company castrated a native man at Fort Vancouver who wore women’s clothes and worked in the sex-trade.  John McLoughlin, chief factor of the Columbia Department (approximately today’s Oregon, Washington and British Columbia) reported this incident in the postscript of an 1837 letter addressed to his superiors in London:

P.S. It is true that an Indian was emasculated by Dr. Gairdner but without my knowledge or consent, the fact is the fellow used to dress himself up as a female and go on board the Vessels and offer himself to the Sailors…at last the sailors got hold of him and Dr. Gairdner emasculated him and I only heard of it half an hours after the operation had been performed.

The willingness of the sailors to commit such a gruesome act can be explained by the logic of dual stigmatization.  Fur-traders in the Pacific Northwest negatively stigmatized Indigenous people as “savages.”  McLoughlin himself, who understood the importance of maintaining publicly respectful relationships with the Indigenous people upon whom the fur-trade depended, described Indigenous people as  “savage treacherous and numerous” in his private correspondence to company governors in London.  Already understood as somehow “lesser” for merely being Indigenous, LBGT Indigenous people were further stigmatized due to their “abhorrent” sexual and gender behaviour.  This context of stigmatization enabled otherwise ordinary men, including an educated medical doctor, to forcibly cut off a man’s genitals for the “crime” of wearing women’s clothing.

Yet, despite this incident at Fort Vancouver in 1837, interactions between male fur-traders and LBGT native people in the Pacific Northwest during this period were not always violent.  Sometimes male fur-traders showed respect and even great admiration for LBGT native people.  Ross Cox’s description of the “hermaphrodite chief” that began this article was one such interaction where admiration prevailed over a pattern of condemnation and violence.  Cox described the “chief” in glowing terms:  “Whenever we called on him we were received with a degree of courteous hospitality which I never experienced elsewhere.  He was communicative and inquisitive, and ridiculed the follies of the Indians in the most philosophical manner.”

The example of Qánqon, warrior, courier, guide and prophet provides another example of a relationship between a LBGT native person and male fur-traders that was based on a degree of respect in the Pacific Northwest.  Qánqon was a Kutenai Indigenous person who suddenly left her French Canadian husband, began to dress like a man, and became a warrior.  She had many intimate relationships with women, and was employed by the Northwest Company as a guide and messenger. According to this description, Qánqon would have been known as a “titqattek” (meaning “pretending to be a man”) amongst the Kutenai.  Alexander Ross, a fur-trader from Scotland, expressed shock but certainly not outrage, upon learning that his guides for a routine voyage were to be Qánqon and her wife:  “Instead of being man and wife, as they at first gave us to understand, they were in fact both women – and bold adventurous amazons they were.  In accompanying us, they sometimes shot ahead, and at other times loitered behind, as suited their plans.”  As in the case of Ross Cox, a male fur-trader expressed admiration for some LBGT native people by calling Qánqon and her wife “bold” and “adventurous.”

Fur-traders often negatively stereotyped female indigenous people as living in a “slave like” state in relation to their male husbands and relatives.  This might explain Ross’ positive account of Qánqon and her wife, and references about her in other traders’ journals.  To the fur traders, an Indigenous woman such as Qánqon, who “escaped” a supposed life of slavery by living like a man, might garner admiration and sympathy.

Importantly, Cox and Ross’ respect shown for the “hermaphrodite chief” and Qánqon should not be taken to mean that these fur-traders considered LBGT native peoples as their equals.  These moments of admiration always took place against the larger backdrop of imperialist ideology, in which white people were civilized and native people were savages.  A truly sympathetic and egalitarian stance on behalf of Europeans towards Indigenous peoples (regardless of sexual or gender orientation) is exceedingly rare in this period of history.

Conclusion
Generalizations are difficult about the nature of interactions between male fur-traders and LBGT native people in the Pacific Northwest fur-trade period. The small number of encounters discussed here varied: some horrifically violent, some respectful.  A context in which Europeans stigmatized Indigenous people once for being “savages” and again for being “LBGT” led at times to violent interactions.  A misperception amongst male fur-traders that Indigenous women lived like slaves may have also contributed to fur traders’ admiration for Qánqon, who lived like a man.  Ross Cox’s respectful stance towards his interlocutor is harder to explain beyond individual idiosyncrasies.

The highly varied nature of these moments of encounter suggests that the prevalence of homophobia and transphobia in post-colonial societies, of which Uganda is a visible case today, cannot be understood as solely resulting from the internalization of negative colonial discourse about LBGT Indigenous people.  Although each society’s experience of colonialism was unique, the history of the early colonial period in the Pacific Northwest suggests that Europeans were not always uniformly and unambiguously homophobic or transphobic in their interactions with Indigenous people.  It would thus be too simple to assume that instances of homophobia in post-colonial societies result solely and directly from a negative history of colonialism.  Further cross-cultural research might confirm or dispel this conjecture.

Eric Wright (@ericnwright) is a Historian & Researcher based in Vancouver, B.C.  Find him at  www.ericnwright.com.

2 thoughts on ““And bold and adventurous amazons they were”: Colonial encounters with LGBT Indigenous people in the Pacific Northwest fur-trade”