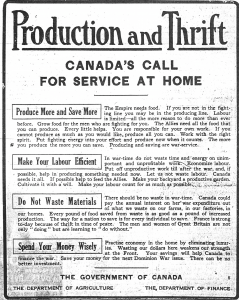 In the summer of 1914, the twin cities of Fort William and Port Arthur, similar to the rest of Canada, thought the “European war” would be a short one.[1] When Christmas came and went without any sign of peace, most Canadians just redefined their idea of “short.” Nonetheless, by spring 1915, Lakehead households were becoming concerned about food for the upcoming winter should the conflict continue. Families in Fort William and Port Arthur contributed to the war effort by accepting a government-mandated system of food control certain that victory in the kitchen would lead to triumph on the European front. [read more]

ActiveHistory.ca  is featuring the following paper as part of  “Canada’s First World War: A Centennial Series on ActiveHistory.ca”, a multi-year series of regular posts about the history and centennial of the First World War.  It was first published by Papers & Records, Thunder Bay Historical Museum Society, 2014.