“When I was at that school,” Joseph Auguste (Augie) Merasty writes of his years at St. Therese Residential School, “it seemed always to be winter time” (Merasty, 41). It’s little surprise, then, that certain anecdotes from that season stand out in the memoir he’s written with David Carpenter, The Education of Augie Merasty: A Residential School Memoir. 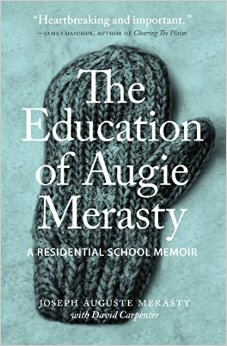 One winter when Augie was 11 or 12, he recounts vividly seven decades later, he and another boy were forced to retrace their steps 20 miles across the lake and into the wild, by themselves and with the temperature plummeting, in search of the two mittens they’d lost. Out there alone, as the temperatures plummeted, the boys’ fright was only exasperated when they came across fresh wolf tracks and imagined having to fend off a pack with nothing but sticks. When they found all trace of the lost mittens erased by the blowing wind, they returned to school to admit their failure to Sister St. Mercy. “We, of course, got the strap, twenty strokes on both hands,” Merasty concludes (12).

This matter-of-fact tone is a strength of Merasty’s memoirs, underlining as it does the casual nature of the brutalities he and the other Indigenous children suffered at St. Therese. It wasn’t just that physical and sexual abuse occurred over and over again, but the school’s pervading climate: the hypocrisy of students subsisting on “rotten porridge and dry bread”, for example, while Brothers and Sisters feasted on roast chicken and cake (14).

The students were just kids, but doing the things that kids do—whispering, poking each other in the ribs, or laughing when the livestock on the property mated—resulted in regular, furious punishments out-of-scale with the perceived infraction: getting the strap, being beaten with a hose, or, in Brother Lepeigne’s hands, being forced to fight with another misbehaving boy while the other students gathered round in a circle. Once, when Augie hit a Brother with a bean from a slingshot as a prank, the schoolmaster punished him “with the strap, beaten with fists to the face, and a foot to the ribs. I will never forget how it hurt” (25). Recounting nothing for mere shock value, Merasty’s memories reinforce how normal such behaviour was for St. Therese staff.

The slim volume is filled with episodes from Merasty’s time at the residential school in Sturgeon Landing, located in northeastern Saskatchewan, near the Manitoba border, from the time of his enrollment in 1935, aged five and a half, until his departure in 1944.

Merasty opens with some generally happy memories—and he adds a handful of instances where the kids took small measures of revenge on the staff, plotting their short-lived victories in Cree. Then, he moves into progressively darker territory to the incidents leaving, as he puts it, “the worst for last” (43). It is the characters filling the later pages, who come into sharpest focus—and who clearly made a deeper impression on Augie.

There was the “heartless” Sister St. Mercy, of the mitten expedition, and dozens more physical torments, not the least of which came from training Sister St. Joy. It didn’t take long for the fresh recruit from the nunnery “to practice what her bosom buddy Sister St. Mercy was doing” (42). Bad behaviour begat bad behaviour among the staff who, clearly knowing it was wrong, tried to bribe children into silence with promises of candy or favours. There was Johannes Verwelkend, a Brother of German descent who sexually abused male students in his workshop, in a shockingly open and brazen manner, and tried indoctrinating them with Nazi ideology.

But it’s Brother Lepeigne (pronounced, of course, as Le Pain) who emerges as the prime antagonist for Augie, ruling over the boys in his care with clenched fists. Cornering an eight-and-a-half-year-old Augie in a washroom, he followed molestation with threats of beating him with a hose or throwing him out a fourth floor window if Augie talked.

But even Lepeigne is humanized in Augie’s introspection, seen as “somehow paranoid in his position of authority and wanted to show who was boss” (61). Lepeigne and the Sisters, he suggests, were driven by their social isolation. It’s not a matter of forgiving by any means, but a reflection of Merasty’s grappling for answers, an undercurrent throughout the book. Why did these people do these things? Why didn’t other teachers or church authorities seem to notice or care? And why weren’t the hypocrites at St. Therese—who received the sacrament each morning then rained abuse down on children—themselves punished?

He struggles to understand why former students grown into adults didn’t report St. Therese to the authorities, a critique that could extend to his own older sisters and brother. He wonders why his own parents, “religious fanatics”, he calls them, deferred to church authority “with unshakeable reverence” (50). Augie questions the chiefs who visited time after time and—distracted by hearty meals and nicely-dressed kids singing choir songs—told the pupils “how lucky we were to be looked after in such a school as St. Therese Residential, and we should be thankful to God and to the administration for such blessings” (16). Merasty doesn’t find any answers.

When Augie repeatedly offers to show you his scars—physical reminders of being “kicked hard” for speaking during silent time, or being knocked (pushed?) down the stairs by a priest—it seems he’s still pleading to be believed (38). It’s as if his time at St. Therese and his life on the fringes since has made him used to not being heard.

The Education of Augie Merasty jumps around, from anecdote to anecdote, and year to year, then doubles back to the an earlier time. At least partly due to the nature of memories, and traumatic memories in particular, but the narrative can be a bit of a maze to follow at times, with some details not always fully fleshed out. There are blind spots and topics one fervently wishes could have been expanded upon beyond what Augie can share from first-hand knowledge alone.

For instance, the brief glimpse of Sister Felicity is fascinating. Part-Cree and a former student at St. Therese, Felicity returned as a nun when Augie was in his early teens. Though her actions with him would meet the definition of sexual abuse, Augie speaks of her like a lost teenage romance. She leaves St. Therese, and disappears from the story, not long after her incident with Augie, though he later hears rumours that she left the order and was married. What could be learned about the residential school experience from the circumstances of her life?

David Carpenter, who assembled the book from packages Merasty sent him between 2001 and 2009, has merged multiple versions of the same incidents and edited for clarity, but he tried to leave the words as much as possible just as Augie had written them. An award-winning Saskatchewan author, Carpenter was recommended when Merasty contacted the University of Saskatchewan for help expanding his submission to the Truth and Reconciliation Commission into a book. Augie had hoped to finish the book in a couple months. Carpenter soon discovered Augie’s time at St. Therese was only half the story.

The next 12 years provided a cyclical pattern of his irrepressible enthusiasm followed by bouts of dejection, phone calls and letters with manuscripts followed by missed in-person meetings and silence—for three full years at one point. Augie was on and off the bottle, splitting his time between the streets of Prince Albert and his long-unfinished cabin near Peter Ballantyne Cree Nation. He painstakingly recorded his memories by hand, then lost batches of pages to theft, his own carelessness, and in one case, a black bear ransacking his cabin. If his stories aren’t always fully fleshed out, it’s a wonder that the book was finished at all, and a testament to not only Merasty’s resilience but also Carpenter’s fulfillment of a commitment made a decade earlier to a person he barely knew.

What’s missing, however, for the lay reader who hasn’t researched or closely followed news of the Canada’s residential School system and its aftermath, however, is some additional historical context—perhaps as a stand-alone chapter—that would position Augie’s experiences at St. Therese in a broader context. Was St. Therese typical of residential school, or a particularly harsh institution? Moreover, this context might flesh out some of the personages he knew only through a child’s eyes. What might archival records share about Sisters St. Mercy and St. Joy, or Brother Lepeigne’s careers and lives?

Carpenter’s introduction and afterword, sharing his experiences with and impressions of his correspondent and the challenges in bringing the book to print, allows us to come to better understand Augie’s “sometimes chaotic, sometimes heroic aftermath of his life” (xxix), as Carpenter describes the last decade. Where Augie focuses on physical scars, Carpenter’s experiences with Augie illustrate the long-term impacts of his residential school experience. And with The Education of Augie Merasty, he helps Merasty—who could be any number of individuals we each pass on the street without a second glance—find his voice.

One thought on “A Review of The Education of Augie Merasty: A Residential School Memoir”