Canada’s sesquicentennial has been contentious. Both historians and the broader public have discussed and debated the commemoration and celebration of the “birth of the nation”. Although less feted and expectantly less controversial, this year also marks the centenary of the Halifax Explosion. With our senses heightened from tuning into (or out of) Canada’s sesquicentennial, the 100th anniversary of the Halifax Explosion provides another opportunity to witness the creation of commemoration and the continuation of memory. On the eve of the Explosion’s anniversary (just over a month away), we can keep our ears perked for ways in which the Explosion will be remembered. Is the Explosion going to be subsumed under the Canada 150 umbrella, or will it be an outlier? Will it be cast as a local tragedy, or as a national disaster?

Memory is a contested commodity and it presents unique challenges such as who has the right to create memory (particularly on civic or national scales)? Who determines what is included, and why? Furthermore, memory and commemoration are malleable substances that change over time. Commemorative acts provide the occasion to examine embedded meaning and messages, both consciously and subconsciously created in the commemorative process.

It is interesting to note that “major anniversaries” of the Halifax Explosion have coincided with national dates of “historical importance”. The first anniversary fell in 1918, the end of the First World War. The twenty-fifth anniversary was in the middle of the Second World War (1942), which saw the Dieppe Raid and Japanese Canadian internment. Canada’s centenary in 1967 fell on the fiftieth anniversary and the seventy-fifth anniversary in 1992 broadly reflected the advent of technology. Thus, in the last one hundred years, opportunities to have national commemoration displace the memory of the Halifax Explosion or to draw on it for nationalistic purposes have been plentiful. This year is no exception.

Over the past one hundred years, the modes of commemoration of the Halifax Explosion have been fluid. Immediate efforts included funerals and etched tombstones for the dead. Soon after, the task of rebuilding started in earnest; the Hydrostone became, at the time, Canada’s largest building project and was both futuristic and civic-minded in its design. Other reconstruction was undertaken in the names of the victims; United Memorial Church was constructed by two congregations that lost their respective churches and 250 members. They came together as one to rebuild. A remembrance ceremony held on the morning of December 6, 1917 at 9:05am soon became an annual tradition. Then, in 1987 (the 68th anniversary of the Explosion), largely through public fundraising, the city erected the memorial bell tower in Fort Needham overlooking the area destroyed by the explosion. The CBC news clip of the ceremony reveals a small crowd, and the commemorative aspect of the ceremony is upstaged by a peculiar focus on the fact that the time capsule would not fit. It was and remains the city’s largest permanent memorial. 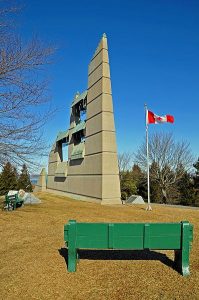 Commemoration also came in the form of literature, and succeeding years were marked by technological advancements such as television broadcasting (Shattered City, 2003). The most well-known form of commemoration is, of course, Canada’s Heritage Minute (1991) about Vincent Coleman which tied for first in the 2012 Historica-Dominion Institute poll of Canada’s favourite Heritage Minutes. What remains constant throughout the shifting modes of commemoration is the focus on the victims, survivors, and the city, through themes of innocence (or naivety), trauma, and more since the 90s, heroism. The Heritage Minute truly turned the tide of public memory of the explosion; the heroism of Coleman became the primary lens through which we remember the Explosion. It seems to have worked, as this year Halifax voted to name one of its new harbour ferries after Coleman. And if you are moving to Halifax you may want to consider renting an apartment at The Vincent Coleman (an extreme and quizzical realisation of this memory).

The Coleman Heritage Minute brought the Explosion to the forefront of Canadians’ minds. On one hand, the Minute has been extremely successful; almost every child born in the 1980s/90s will be able to recall the line, “get these people outta here, that ship is gonna blow”. It is, however, slightly glorified and selective in its scope. But what is next? Will the hundredth anniversary alter this commemorative trend? We can expect the usual news coverage, television interviews and soundbites of survivors (one woman, Hazel, who was a child during the Explosion will speak about her memories), but while we will have to wait until December 6th for the final reveal, there are many unique commemorative events taking place in the meantime.

Halifax should be commended for its civic and community efforts both for keeping the memory of the Explosion alive and because it is a very unique display of twenty-first-century memory in the making. The Halifax Regional Municipality Archives and the Nova Scotia Archives have made fantastic efforts to add to and share their collections. The Maritime Museum’s new exhibit Collision in the Narrows provides new interpretations of the well documented disaster. At the civic level, the 100th Anniversary Advisory Committee and community partners like the Nova Scotia Museum and the Halifax Public Libraries have produced 100 Years 100 Stories, a website which captures 100 stories and experiences about the Explosion.

These efforts are in addition to many community-organised events such as theatre and musical productions, an Augmented Reality Workshop, public walks/tours, public talks, “story” times, art, films, and even a memorial quilt. The annual memorial service this year will also be live streamed to be accessible for those unable to attend in person. There are also some very modern modes of commemoration in the works, including “drifts” or app-based guided walks, the HExD project, and a Twitter feed that will announce the names of every victim who died (@HfxRemembrance). All of this is in addition to the badge of pride worn by Haligonians (and Nova Scotians) through their own family stories.

The centenary is ripe for research, even if its poularisation is largely due to our societal fascination with round numbers. Historians like Jerry Bannister have questioned our fixation on anniversaries; after all, what is the difference between 99 years and 100 years if not just a tidy number? Regardless, the centenary appears to be inspiring the community to refocus its memory of the Explosion and create new modes of commemoration and to include new, alternative, and inclusive narratives. The Mi’kmaq experience in the Explosion, for instance, has long deserved greater attention.

It is clear from the foregoing that at the local and regional level, the city is making waves in the commemoration of the Explosion. Unfortunately, it is quite possible that the centenary will be cast as a local tragedy with only regional scope and importance. Yet, according to the Canadian Disaster Database, the Halifax Explosion remains Canada’s largest disaster in terms of deaths, injuries, and destruction. Will national discussions on December 6th recognise this point? Will the fact that the Explosion effectively brought the war to Canada’s shores be emphasised? Perhaps local sentiment that our nation should recognise that the innocent civilians of Halifax paid a price of war, is valid. Even though Halifax currently stands as Canada’s largest Canadian Forces base and was Canada’s edge of war in both the First and Second World Wars, does its location in the “East”, far away from central Canada mean it falls off the metaphorical map?

Claire L. Halstead is a Postdoctoral Research Fellow at Saint Mary’s University and a contributing editor at ActiveHistory.ca. Her HExD project is funded by a research grant from the Nova Scotia Museum.