Today, 23 October, is the 52nd anniversary of Chanie Wenjack’s death. Chanie (misnamed Charlie by his teachers) was a 12-year-old Anishinaabe boy who, along with two other classmates, ran away from the Cecilia Jeffrey Indian Residential School in Kenora, Ontario in October 1966. Fleeing the school’s abusive environment, Wenjack tried to make it home to Ogoki Post in northern Ontario, a 600-kilometer journey on foot. He did not make it. Instead, he died of exposure. A CN engineer discovered Wenjack’s body on the side of the railway track. 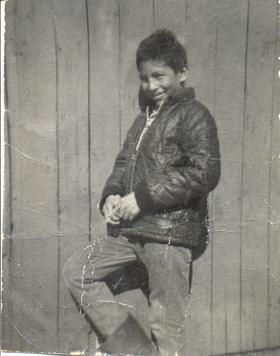 The anniversary of Wenjack’s death offers an opportunity to reflect on what historian Adele Perry calls the “histories we remember” about colonialism generally and residential schooling and Wenjack in particular.[1] As the new CBC documentary, Finding the Secret Path, demonstrates, for many Canadians Wenjack’s story will forever be linked to Gord Downie, the lead singer of the Tragically Hip. After being diagnosed with an aggressive form of brain cancer that would eventually claim his life, Downie committed his final years to producing Secret Path, a multimedia project (album, graphic novel, and animated film) to popularize Wenjack’s story. Finding the Secret Path advances the narrative that it was a dying Downie who used his star power to blow the lid off Wenjack’s story to force Canadians to grapple with reconciliation.

Though Secret Path has increased popular knowledge of Wenjack’s story and residential schools, it is important to remember that it is neither the first nor the only project to attempt to do so. Fifty years before, journalists and musicians tried to bring attention to Wenjack’s story and the horrors of residential schooling. Yet these projects have more or less been forgotten; they are not part of the history we remember. A closer look at earlier attempts to shine a spotlight on Wenjack complicates the ways we remember residential school history and poses an unsettling question: why, when some people in the 1960s and 1970s knew about Wenjack and the devastating effects of residential schooling, did the system remain in operation for another thirty years?

In 1967, the year after Wenjack died, Ian Adams published a four-page exposé, “The Lonely Death of Charlie Wenjack,” in Maclean’s. Adams pulls few punches in the piece, explaining, “It’s not so unusual that Indian children run away from the residential schools they are sent to. They do it all the time, and they lose their toes and their fingers to frostbite. Sometimes they lose a leg or an arm trying to climb aboard freight trains. Occasionally one of them dies. And perhaps because they are Indians, no one seems to care very much. So this, then, is the story of how a little boy met a terrible and lonely death, of the handful of people who became involved, and of a town that hardly noticed.”[2] Adams then details Chanie’s story and explains how, once the boy’s body was discovered, an inquiry was held into the conditions at the Cecilia Jeffrey Indian Residential School. The all-white jury, in the 1960s, concluded that “the Indian education system causes tremendous emotional and adjustment problems.”[3] The jury’s conclusion reinforced what many Indigenous students, parents, and community members from across Canada had been saying since the system started in the 1880s. Nevertheless, Adams’s piece, much like the inquiry’s report and Indigenous attempts to raise awareness about the problems with residential schooling from the beginning, was largely ignored by the Department of Indian Affairs and by Canadians generally. 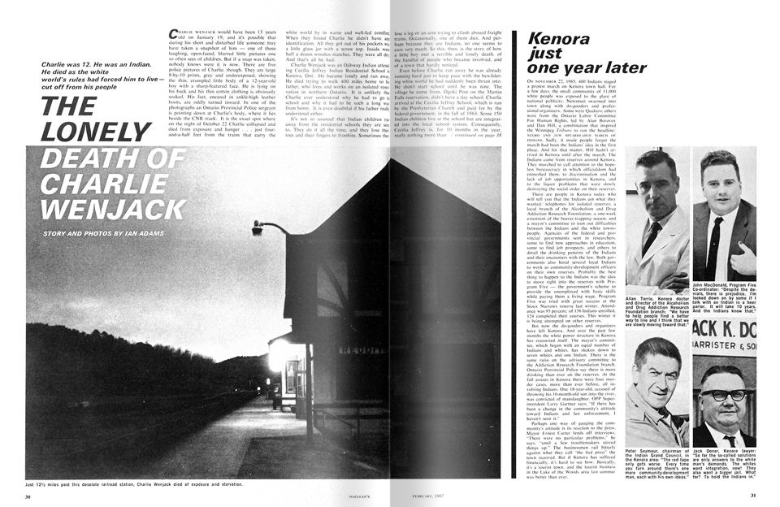 By the 1970s, other critical voices emerged including Mi’kmaq singer, songwriter, and filmmaker Willie Dunn. Dunn gained recognition for his 1968 short film, The Ballad of Crowfoot about colonization and betrayal witnessed by Chief Crowfoot in Treaty 7 territory in southern Alberta. Often credited as Canada’s first music video, Dunn’s film featured an original song he composed of the same name. In 1971, he released his debut album, Willie Dunn, that, along with “The Ballad of Crowfoot” and other tunes celebrating Indigenous leaders like Louis Riel, included a song about Chanie Wenjack. Like Downie, Dunn used his musical platform to try to shine a light on the harrowing story of Wenjack. 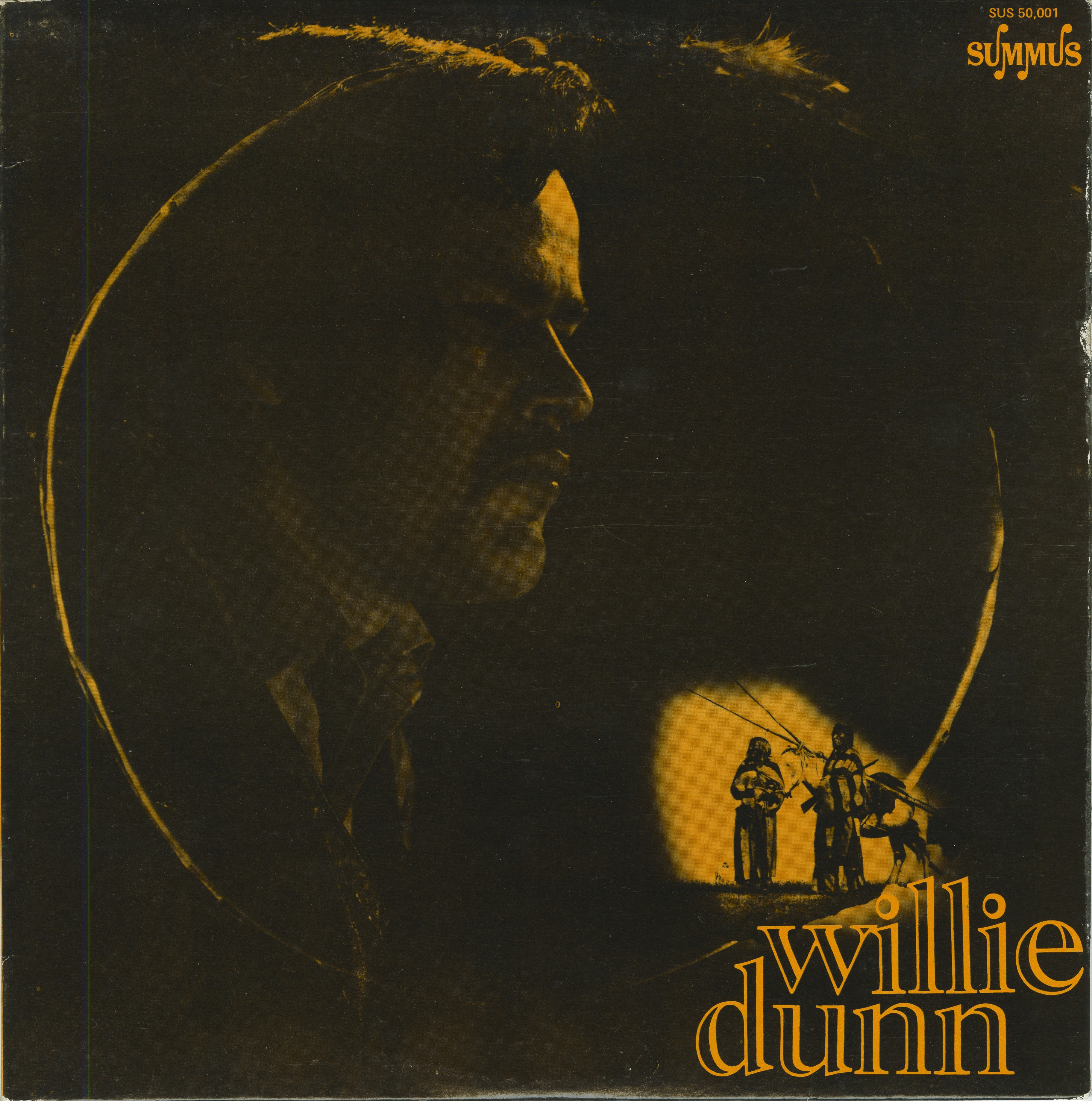 Walk on through the snow.

Lonely as a single star,

In the skies above,

His father in a mining camp,

His mother in the ground,

And he’s looking for his dad,

And he’s looking out for love,

Just a lost little boy by the railroad track

It’s been a time since last he’s ate,

And as the night grows colder,

He wonders of his fate.

For his legs are wracked with pain

As he staggers through the night.

And he sees through his troubled eyes,

His hands are turning white.

Is that the great Wendigo

Come to look upon my face?

And are the skies exploding

Down the misty aisles of space?

Who’s that coming down the track,

Walking up to me?

Her arms outstretched and waiting,

Waiting just for me.

Shufflin’ through the snow….

On the record’s backcover, Dunn offered an explanation of the song. He wrote:

Charlie is a song dealing with the system of residential schools in Canada. The song is a microcosm of a very large problem, and a symbol of repressive colonialism.

I feel that the combination of the stern educator, the police and the various white supremists has almost completely destroyed the dreams native people may have had of taking our pride from within ourselves and using it effectively to more forward. Living, trying to maintain dignity in a “might is right” situation, by the grace of the white man, is almost impossible to do.

It takes years for the native person to get over the effects of the residential school…if ever.

Unfortunately, Dunn’s recordings had little mainstream success in Canada, perhaps because of his brutally honest lyrics. To this day, it is difficult to obtain Dunn’s music. iTunes has a small selection of songs, but a digital copy of “Charlie” is not among them. YouTube used to have the song, but the video has since been taken down. The only digital version of the song is the one on the Museum of Canadian Music’s website. 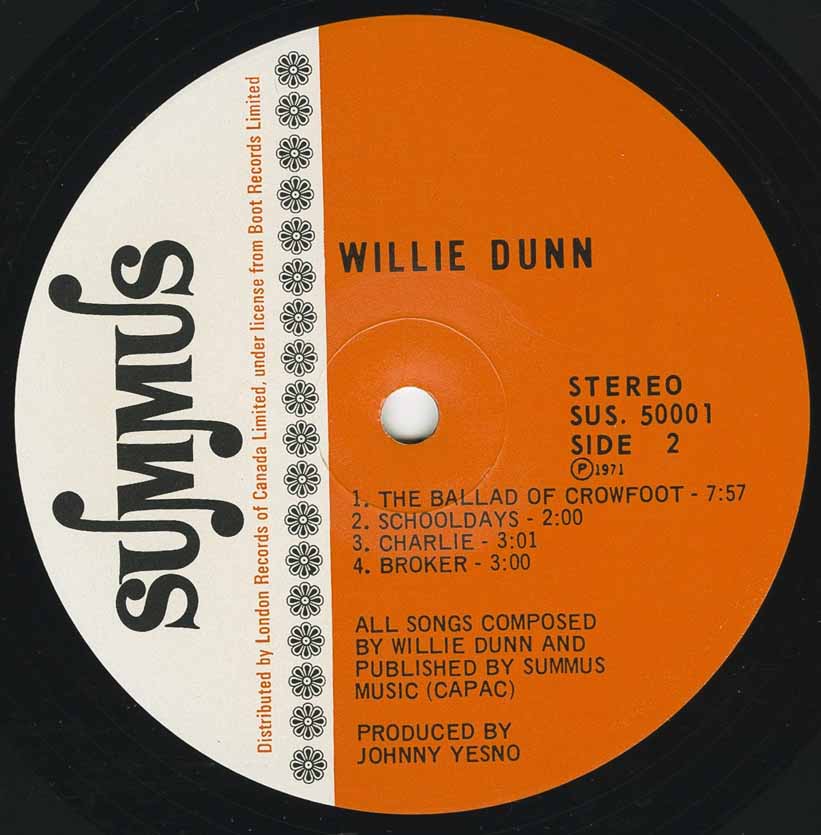 In the era of truth and reconciliation, it is important to remember the long history of efforts to bring attention to the effects of Canada’s colonial policies. Although recent cultural productions such as Downie’s Secret Path, Historica Canada’s Heritage Minute, and Joseph Boyden’s novella Wenjack have increased people’s knowledge of Canada’s history of colonialism and residential schooling, they are not the only projects to try and raise awareness about these issues and Wenjack in particular. Shortly after Chanie’s death in 1966, a number of people tried to call attention to his story and the horrors of residential schools. But Canada and Canadians mostly ignored these attempts, for varying reasons. Examining these earlier interventions complicates the way we remember Wenjack’s story and residential school history. Moreover, understanding that a range of people criticized the Indian Residential School system during its operation challenges the “we can’t judge the past by the standards of today” argument used by some to side-step conversations about confronting Canada’s colonial past and present.

It is important to critically reflect on the histories and projects we choose to remember and to consider how they shape the state and direction of reconciliation today. Currently, Secret Path is monopolizing Wenjack’s memorialization. While thousands of students are now using Secret Path in schools across the country, other comic books about residential schooling by Indigenous artists and writers, like David Alexander Robinson, are making their way onto “books to weed out” lists in certain school districts. Moreover, in 2018 the Government of Canada allocated $5 million to the Gord Downie and Charlie Wenjack Fund to support reconciliation but provided nothing to the National Centre for Truth and Reconciliation, the organization working to recover and publicize residential school documents to support survivors, their families, and Canadians generally.

The histories we remember significantly shape the presents and futures we work to create. If we are to honour Chanie Wenjack and remember the history of residential schooling in ways that can facilitate meaningful reconciliation and help Canadians establish reciprocal, Nation to Nation relations with Indigenous peoples, we must create space for more voices, even if those voices remind us of things we might not want to remember.

[1] In examining the ways in which people remember Winnipeg’s history of colonialism and the construction of an aqueduct, Perry notes: “History is about the past, but we research, write, and discuss it in the present.” Adele Perry, Aqueduct: Colonialism, Resources, and the Histories We Remember (Winnipeg: ARP, 2016), 18. The way we remember history, then, tells us a lot about ourselves and society in the present.