This is the second in a series of posts marking the 75th anniversary of D-Day and the end of the Second World War as part of a partnership between Active History and the Juno Beach Centre. If you would like to contribute, contact series coordinator Alex Fitzgerald-Black at alex@junobeach.org.

Editor’s note: On May 30th, 2019 Historica Canada released a new Heritage Minute honouring those who participated in D-Day, the June 6th landings in Normandy 75 years ago. Jen Sguigna, who consulted on the project, gives her readers insight into both the man at the centre of the Minute and the family he left behind. You can watch the heritage minute here.

The story of Archie begins with a list: Canadians killed on D-Day.

The list stops where Archie’s life stopped, with no acknowledgement of the lives that went on without him. 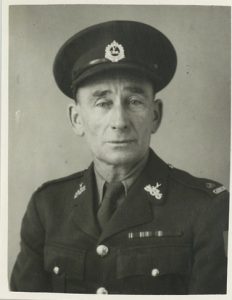 His daughter Margie, now in her eighties, tells a story of her father that can’t be found in war diaries and military histories. She remembers him proudly: Beloved husband, adored father. Revered in his community and dedicated to his family farm. His strong sense of duty.

I first found a mention of Archie in an East Coast community newsletter. Set beside a photo of Archie, a short article recounted the story of his young cousin Helen and how she learned about his death. I reached out to the editor to try to request a copy of the photo. Meanwhile, military history sources added the first layer to Archie’s story.

Born 1896 in Black River Bridge, New Brunswick, he enlisted in the CEF in 1915 and arrived in France shortly after the Battle of Vimy Ridge, serving with the 26th Battalion. He survived the war and returned home, married, and had two children. Every summer, he attended militia training camp. He returned to the army full-time when war broke out in 1939 and was promoted to major in the North Shore (New Brunswick) Regiment. He went overseas in the summer of 1941.

Archie maintained a grand reputation in the North Shores. His ‘A’ Company always did well in inspections and often won in sports competitions. The younger men regarded him as a father figure. But, he was old for a combat officer and was offered opportunities to retire or return home to serve in the Forestry Corps. He declined, refusing to abandon his boys before the impending operation.

On D-Day, the North Shores were one of the assault battalions of 3rd Canadian Infantry Division that landed on Juno Beach. Archie was injured soon after he stepped onto the beach, but continued onward, leading the surviving members of ‘A’ Company through Saint-Aubin-sur-Mer and on to Tailleville. The village was reported to be clear, they did not expect resistance. A soldier threw a smoke bomb and Archie gave the order to move. The men moved on the pop of the grenade, before any smoke provided cover, and a German machine gun fired at the exposed group. Archie was killed instantly, along with Privates Harold Daley and  Arthur Strang. Signaler Bill Savage would later credit Archie with saving his life. Padre R.M. Hickey described him posthumously as a legend within the North Shore Regiment. 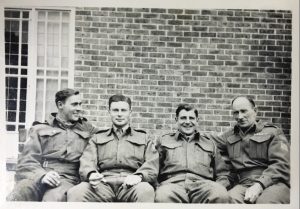 This snapshot of one part of Archie’s life, his military service, was as much as we’d expected to find: the official record showed a brave man with a dedication to duty and loyalty to his men. It is an exceptional story, but it isn’t the whole story.

The newsletter editor did more than provide a photo: he connected me with Archie’s family, who eagerly shared the story they knew. They provided photo scrapbooks, military paraphernalia (including Archie’s own swagger stick!), various records and clippings, and – most significantly – over 200 letters written by Archie during the Second World War. On top of all that, I discovered the Canadian War Museum holds Archie’s First World War letters. It was an incredible, unexpected result: a massive collection of letters from one man’s perspective, his correspondence through two world wars.

Archie was a prolific writer: he covered hundreds of pages in his neat, smooth cursive writing. During the First World War, he wrote to his father and his sisters, describing his daily training and everything he had to carry and wear. He asked about news from home and business on the farm. In one letter, he asks about a local girl named Gracie; he’d recently seen a photo of her and noticed she was looking well. When he returned home, he took over work on his family farm, married Gracie, had a son (Francie) and a daughter (Margie), and built them a home in Black River Bridge, New Brunswick. He taught Sunday school — his class wrote him a cheerful, teasing letter hoping that he’d still teach them even though he was now a busy, married man! 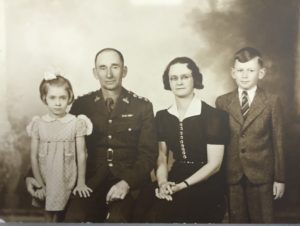 Margie, Archie, Grace, and Francie pose for a formal portrait before Archie heads overseas. Photo courtesy of the MacNaughton family.

When the Second World War began, Archie went to Chatham, NB, for training, returning home when he could. Grace, Francie, and Margie took one last set of family photos with Archie in his uniform before Archie left Canada; later he smiled at the camera at a train station in his uniform, holding his swagger stick. He wrote letters home about how similar his two journeys to England were, except that this time he had private quarters. He asked after the lambs and mourned the death of his father from across an ocean.

While training his men in England, Archie met Lieutenant-General Andrew McNaughton and they discussed their common Scottish ancestry. He kissed the Blarney Stone on leave and stayed with distant relations thrilled to host him. He debated an offer to retire but ultimately would not abandon his boys when it came time to storm the beaches. The soldiers of ‘A’ Company were like sons to him and he was a father to them. On 4 June 1944, Archie wrote a final letter to Gracie. He gave subtle guidance for the future and wished he could tell them more. He told Francie and Gracie to always do what they love. “I am awful glad I was in it. No matter how things go.” Two days later, he was killed. Many who knew him wrote to Gracie with condolences and stories. 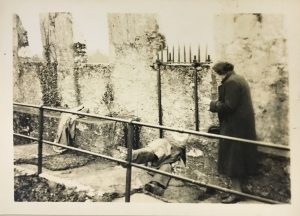 Archie kisses the Blarney stone on leave in March 1944. Photo courtesy of the MacNaughton family.

With Archie gone, Gracie didn’t know what to do. She’d kept the farm going for Archie: Francie was too young to take over and she couldn’t continue to manage it herself. Notes from the photo scrapbooks suggest she eventually moved the family out west. Gracie would visit Archie’s grave in the 1960s, her silver cross visible on her coat and tears visible in her eyes. 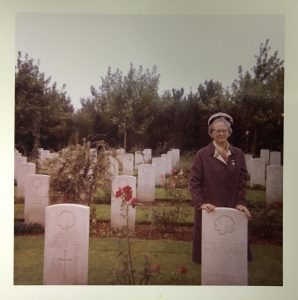 In September 1963, Grace was finally able to travel to France to visit Archie’s final resting place. Photo courtesy of the MacNaughton family.

The letters give us insight into a bigger story about the family that Archie left behind and what the loss of a husband and a father meant to them. Seventy-five years later, Archie’s daughter, Margie, still aches when she thinks of her father.

Margie has a picture of her father as a youth, a newspaper clipping that noted his enlistment. She remembers picking blueberries and jumping into her father’s arms when he returned from farm work. She remembers their dog Browny. She remembers the closet her father built especially for her inside of her very own bedroom. She remembers sitting around the table with her brother, listening to her mother read her father’s words aloud. Sometimes he wrote directly to her. He sent silver teaspoons home to Gracie and small gifts for her and Francie. Her nine-year-old brain could not understand what happened when he was killed: how could he not come home? She didn’t realize that the last time she saw her father would be the last time she saw her father. He told her he couldn’t come home yet because the boys he led would be scared without him; she told him, “But Daddy, I’m scared too.”

Margie lived a full and successful life, remaining active while she raised her family. After suffering a stroke that left her partially paralyzed, she wrote a short series of cookbooks to help others cook one-handed. Margie knows, more than anything, that her father was a good man. She wonders how she would have been different if Archie had come home. She hopes that she is half as good as he was. 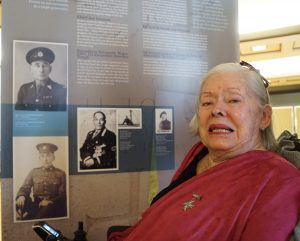 In 2017, Margie proudly wore her mother’s silver cross to a From Vimy to Juno event in Montreal. Her father’s story was prominently featured. Photo courtesy of the MacNaughton family.

As the memory of the Second World War grows more distant to Canadians today, it is important to remember that time does not erase the loss. Stories about Canadians killed in Normandy are also the stories of the families and communities who endured those sacrifices. Stories of loss and perseverance echoed across the country as the war progressed and more Canadians were killed an ocean away. Archie’s story reverberates even now. His grandchildren and great-grandchildren have spread across the country and around the world, but they still know about their grandfather, killed far from home in Normandy.

When the Juno Beach Centre Association set out to tell the stories of Canadians killed on D-Day, I thought we’d find 381 stories that ended on or near a beach in Normandy. But Archie’s story didn’t end on Juno Beach; it became Margie’s story too and continues to resonate across the generations.

After completing her MA in Public History at Western University, Jen Sguigna worked with Canada’s History and Historica Canada before landing at the Juno Beach Centre Association. Now the JBCA’s Program Manager in Canada, she happily spends her days learning and sharing stories like Archie’s.