The term “genocide” was first used by Polish-Jewish legal scholar Raphael Lemkin in the lead up to the Second World War. Lemkin’s definition of genocide included an important principle, which didn’t restrict the definition to physical destruction of a nation or ethnic group. As he explained:

Generally speaking, genocide does not necessarily mean the immediate destruction of a nation, except when accomplished by mass killings of all members of a nation. It is intended rather to signify a coordinated plan of different actions aiming at the destruction of essential foundations of the life of national groups, with the aim of annihilating the groups themselves.[i]

The objectives of a plan of genocide would include actions aimed at the “disintegration of the political and social institutions, of culture, language, national feelings, religion, and the economic existence of national groups, and the destruction of the personal security, liberty, health, dignity, and even the lives of the individuals belonging to such groups.”[ii]

Disagreements remain today over what does or does not constitute “genocide,” including as it relates to Canada. However, as Canadian writer and filmmaker Larry Krotz explains, applying the term “genocide” to what happened in North America has a decades-long history, including in the 1973 book The Genocide Machine in Canada: The Pacification of the North, by Robert Davis and Mark Zannis; and 1993’s American Holocaust: Columbus and the Conquest of the New World, by David E. Stannard. A more recent work, Accounting for Genocide: Canada’s Bureaucratic Assault on Aboriginal People, by Dean Neu and Richard Therrien, was published in 2003.

In recent years, and in light of the work of the Truth and Reconciliation Commission of Canada’s (TRC) Final Report, many Indigenous thinkers have turned to evaluating how the term “genocide” applies in Canada. As genocide scholar Andrew Woolford has noted, Canadian scholars have not given colonial genocide in Canada enough attention, due in part, perhaps, to the fact that the spatial and temporal boundaries of the case of genocide in Canada are not obvious. As he notes, “If Canadian settler colonialism was genocidal, where exactly did it occur and when did it begin? And considering the intergenerational effects at stake, as well as the perpetuation of settler colonial practices, can we say for sure whether genocide has even ended?”[iii] Usually, and as he notes, “Much nuance is lost by force fitting it into a traditional comparative genocide studies paradigm that defines cases on national rather than regional or international levels of analysis.”[iv]

Officially, the Government of Canada currently recognizes five genocides: the Holocaust, the Holodomor genocide, the Armenian genocide in 1915, the Rwandan genocide of 1994, and the ethnic cleansing in Bosnia from 1992 to 1995. As Krotz maintains, “In our world, genocide is absolutely the worst thing you can say about an action undertaken by individuals or groups. So atrocious, in fact, that many historic events that carry the characteristics of genocide struggle to – or fail to – get named as such.”[v] But as Woolford argues, and as the testimonies heard by the National Inquiry make clear, we must consider the application of genocide in both legalistic and in social terms, and as it persists today.

Settler colonialist structures enabled this genocide, which takes into account both immediate policies and actions and “the intergenerational effects of genocide, whereby the progeny of survivors also endure the sufferings caused by mass violence which they did not directly experience.”[vi] Genocide is the sum of the social practices, assumptions, and actions detailed within this report; as many witnesses expressed, this country is at war, and Indigenous women, girls, and 2SLGBTQQIA people are under siege. 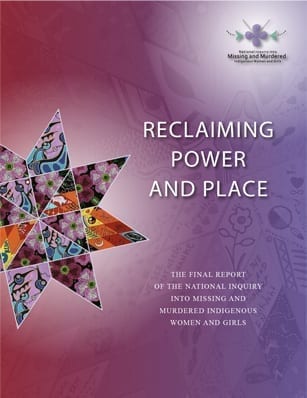 The front cover of the Final Report of the National Inquiry into Missing and Murdered Indigenous Women and Girls.

While the Canadian genocide targets all Indigenous Peoples, Indigenous women, girls and 2SLGBTQQIA people are particularly targeted. Statistics consistently show that rates of violence against Métis, Inuit, and First Nations women, girls, and 2SLGBTQQIA people are much higher than for non-Indigenous women in Canada, even when all over differentiating factors are accounted for. Perpetrators of violence include Indigenous and non-Indigenous family members and partners, casual acquaintances, and serial killers.

Despite the National Inquiry’s best efforts to gather all of the truths relating to the missing and murdered, we conclude that no one knows an exact number of missing and murdered Indigenous women, girls and 2SLGBTQQIA people in Canada. Thousands of women’s deaths or disappearances have likely gone unrecorded over the decades, and many families likely did not feel ready or safe to share with the National Inquiry before our timelines required us to close registration. One of the most telling pieces of information, however, is the amount of people who shared about either their own experiences or their loved ones’ publicly for the first time. Without a doubt there are many more.

We do know that thousands of Indigenous women, girls, and 2SLGBTQQIA have been lost to the Canadian genocide to date. The fact that First Nations, Inuit, and Métis Peoples are still here and that the population is growing should not discount the charge of genocide; the resilience and continued growth of these populations don’t discount the many actions detailed within this report, both historical and contemporary, that have contributed to endemic violence against Indigenous women, girls, and 2SLGBTQQIA people. Ultimately, and despite different circumstances and backgrounds, what connects all these deaths is colonial violence, racism and oppression.

Canada is a settler colonial country. European nations, followed by the new government of “Canada,” imposed its own laws, institutions, and cultures on Indigenous Peoples while occupying their lands. Racist colonial attitudes justified Canada’s policies of assimilation, which sought to eliminate First Nations, Inuit, and Métis Peoples as distinct Peoples and communities.

Colonial violence, as well as racism, sexism, homophobia, and transphobia against Indigenous women, girls, and 2SLGBTQQIA people, has become embedded in everyday life – whether this is through interpersonal forms of violence, through institutions like the health care system and the justice system, or in the laws, policies and structures of Canadian society. The result has been that many Indigenous people have grown up normalized to violence, while Canadian society shows an appalling apathy to addressing the issue. The National Inquiry into Missing and Murdered Indigenous Women and Girls finds that this amounts to genocide.[vii]

[v] Larry Krotz, “A Canadian genocide? A new museum in Winnipeg has become a flashpoint for how we interpret this country’s treatment of First Nations,” The United Church Observer, March 2014, https://www.ucobserver.org/features/2014/03/canadian _genocide/.

[vii] Due to the gravity of this issue, the National Inquiry is preparing a supplementary report on the Canadian genocide of Indigenous Peoples according to the legal definition of “genocide,” which will be publicly available on our website.