This is the eighth of several posts marking the 75th anniversary of D-Day and the end of the Second World War as part of a partnership between Active History and the Juno Beach Centre. If you would like to contribute, contact series coordinator Alex Fitzgerald-Black at alex@junobeach.org.

Today’s post is the second part of a series published on the Library and Archives Canada Blog. We are grateful to Alex Comber and the LAC for making this post available through the ActiveHistory.ca portal. Please go to thediscoverblog.com for part 1, published June 6, 2019.

With part 1 of this post, we marked the 75th anniversary of D-Day and commemorated Canada’s participation in the June 6, 1944, invasion of northwestern Europe, and the Normandy Campaign, which ended on August 30, 1944. In part 2, we explore some of the unique collections that Library and Archives Canada (LAC) holds about these events, and highlight some records that are the most accessible to our clients online. Through outreach activities, targeted and large-scale digitization, and our new DigiLab and Co-Lab initiatives, LAC is striving to make records more easily available.

LAC staff receive many reference requests about our collections of photos. Canadian Film and Photo Unit (CFPU) personnel went ashore 75 years ago, on D-Day, filming and photographing as they landed. During the Normandy Campaign, they continued to produce a visual record that showed more front-line operations than official photographers had been able to capture in previous conflicts. Film clips were incorporated into “Canadian Army Newsreels” for the audiences back home, with some clips, such as the D-Day sequence above, being used internationally.

Photographers attached to the army and navy used both black-and-white and colour cameras, and the ZK Army and CT Navy series group the magnificent colour images together. 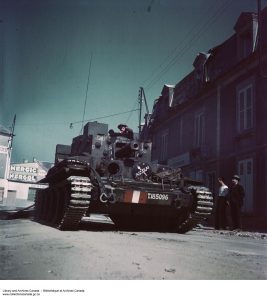 Some of the most iconic imagery of the Canadian military effort in Normandy was incorporated into the Army Numerical series; by the end of hostilities, this had grown to include more than 60,000 photographs. The print albums that were originally produced during the Second World War to handle reproduction requests can help in navigating this overwhelming amount of material. Researchers at our Ottawa location refer to these volumes as the “Red Albums,” because of their red covers. These albums allow visitors to flip through a day-by-day visual record of Canadian army activities from the Second World War. LAC has recently digitized print albums 74, 75, 76 and 77, which show events in France from June 6 until mid-August 1944. 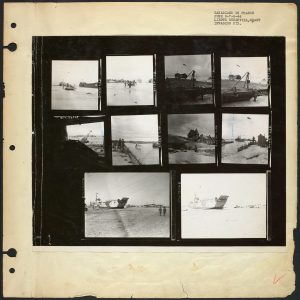 A page from Army Numerical print album Volume 74 of 110, showing the immediate aftermath of the landings (e011217614)

LAC also holds an extensive collection of textual records related to the events of June–August 1944. One of the most important collections is the War Diaries of Canadian army units that participated in the campaign. Units overseas were required to keep a daily record, or “War Diary,” of their activities, for historical purposes. These usually summarized important events, training, preparations and operations. In the Second World War, unit war diaries also often included the names of soldiers who were killed or seriously injured. Officers added additional information, reports, campaign maps, unit newsletters and other important sources in appendices. Selected diaries are being digitized and made accessible through our online catalogue. One remarkable diary, loaded in two separate PDF scans under MIKAN 928089, is for the 1st Canadian Parachute Battalion, the first Canadian soldiers in action on D-Day, as part of “Operation Tonga,” the British 6th Airborne Division landings. 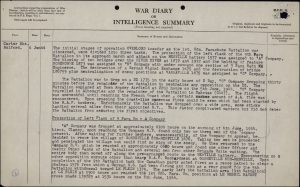 War diaries of command and headquarters units are also important sources because they provide a wider perspective on the successes or failures of military operations. These war diaries included documents sourced from the units under their command. Examples that are currently digitized include the Headquarters of the 3rd Canadian Infantry Division, from June and July 1944. 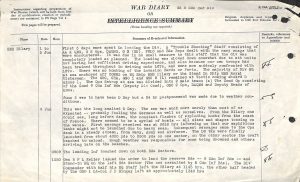 LAC is also the repository for all Second World War personnel files of the Canadian Active Service Force (Overseas Canadian Army), Royal Canadian Navy and Royal Canadian Air Force. The service files of approximately 44,000 men and women who died while serving in these forces from 1939 to 1947 are open to the public. These records include the more than 5,000 files of those who died in operations during the Normandy Campaign. As the result of a partnership with Ancestry.ca, a portion of every open service file was digitized. This selection of documents was then loaded on Ancestry.ca, fully accessible to Canadians who register for a free account. To set up a free account and access these files on Ancestry.ca, see this information and instruction page on our website.

These records have great genealogical and historical value. As the following documents show, they continue to be relevant, and they can powerfully connect us to the men and women who served in the Second World War, and their families. 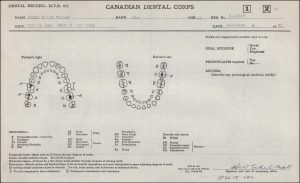 Private Ralph T. Ferns of Toronto went missing on August 14, 1944, during a friendly-fire incident. His unit, the Royal Regiment of Canada, was bombed by Allied aircraft as soldiers were moving up to take part in Operation Tractable, south of Caen. Sixty years later, near Haut Mesnil, France, skeletal remains were discovered. The Department of National Defence’s Casualty Identification Program staff were able to positively identify Private Ferns. The medical documents in his service file, including this dental history sheet, were important sources of information. Ferns was buried with full military honours at Bretteville-sur-Laize Canadian War Cemetery in 2008, with his family in attendance. 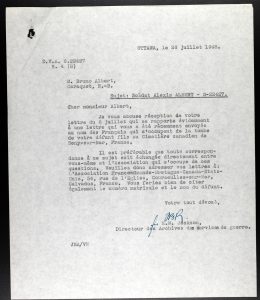 Private Alexis Albert, serving with the North Shore (New Brunswick) Regiment, was killed in action in France on June 11, 1944. Four years later, his father, Bruno Albert, living in Caraquet, New Brunswick, requested the address of the family that was tending his son’s grave at Bény-sur-Mer Canadian War Cemetery in France, to thank them. The Director of War Service Records, Department of Veterans Affairs, provided this response, which helped to connect the grieving family in Canada with French citizens carefully maintaining the burial plot in Normandy.

These are only a few examples of LAC records related to the Canadian military effort in France from June 6 until the end of August 1944. Our Collection Search tool can locate many other invaluable sources to help our clients explore the planning and logistical efforts to sustain Canadian military operations in France, delve deeper into the events themselves, and discover personal stories of hardships, accomplishments, suffering and loss.

Alex Comber is a Military Archivist in the Government Archives Division at Library and Archives Canada.