Anyone else remember The Librarians TV series? I’ll openly admit that I started watching it because the show was focused on library professionals, albeit librarians of a magical library. If there was a show called The Archivists, I would be championing it before it even aired. A lot of people have no idea what an archivist does, and I long for a cultural touchstone to point folks to when they want to know more about my profession. 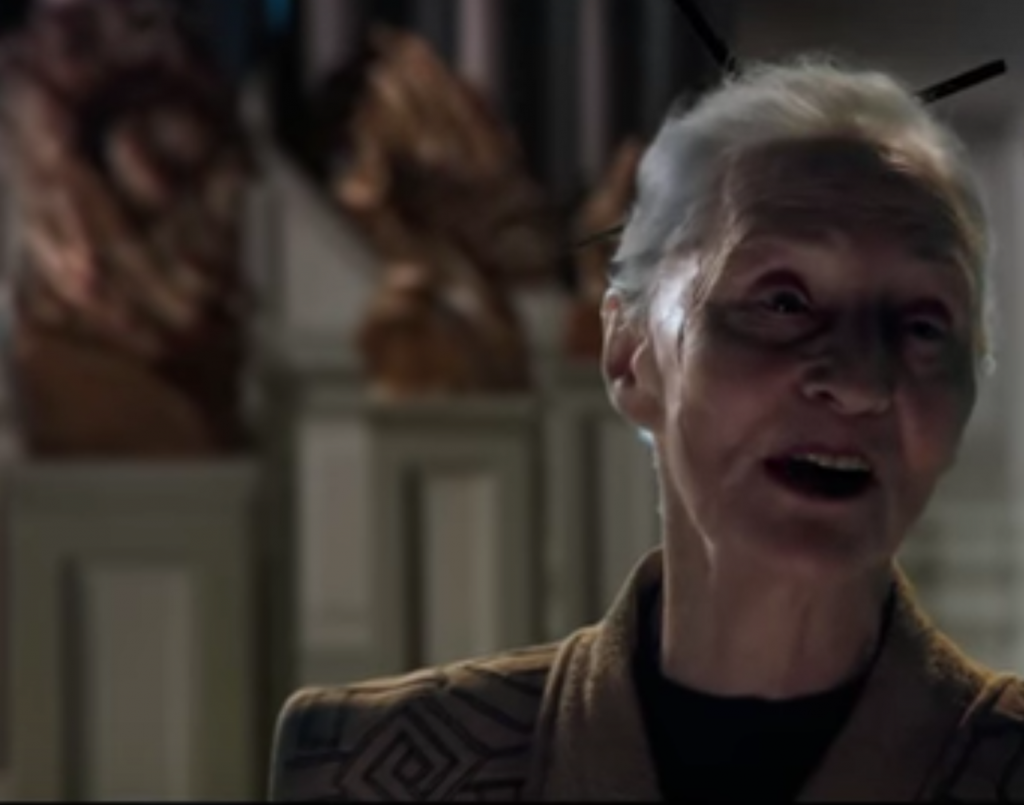 Jocasta Nu, the most famous movie archivist of all time?

It is common for movies to show librarians doing the work of archivists or situations that bypass archival labour and leap to a protagonist rifling through stacks of old documents. This archival exploration might even happen while smoking a pipe and drinking tea, like when Gandalf visits the archives of Gondor and is led down a staircase where he is left to explore piles of records.

Protagonists are often seen as discovering or unearthing vital information in the archives. This “discovering something in the archive” trope erases the work of archivists. In an Active History post Danielle Robichaud noted, “most records that are deemed to be ‘found’, or ‘discovered,’ have been available for use by way of archival finding aids and lost thanks only to the failure of anyone to read them.” Erasure is something which archivists are actively trying to counter in the real world. Archival labour matters, and I would be delighted to see more representation of that labour in films.

Even when archivists are included, they often have limited screen time. Anne Daniel and Amanda Oliver’s 2014 “Seeking an Identity: The Portrayal of Archivists in Film” examined a range of films which included archivist characters. Their work showed that 57% of archivists had less than five minutes on screen during the film. These are hardly leading roles, but looking at the representation of archivists and archives in films can foster conversations about stereotypes and the realities of archival labour.

Star Wars II: Attack of the Clones (2002) contains a short interaction (below) between Jedi Archivist Jocasta Nu and Obi Wan Kenobi. The interaction lasts under a minute but provides ample fodder for discussing the portrayal of archivists, archival spaces, and how archives operate.

The character Jocasta Nu of the Jedi Archives is composed of many information professional stereotypes. She is old, slightly hunched in her posture, and her hair is in huge bun on the top of her head. Beyond these physical stereotypes, this segment also speaks to media interpretations of archives. Archival facilities are often portrayed in film as being places of knowledge and control. Archives are filled with inaccessible records, order, and restrictions.

Archivists are often seen as gatekeepers of knowledge and archives as providing essential information for understanding a problem or moving the film plot forward. Jocasta Nu speaks with absolute conviction about the authenticity and completeness of the Jedi Archives, acting as a mediator to knowledge. Jocasta sternly assures Obi Wan, “if an item does not appear in our records it does not exist!” Despite the certainty of Jocasta’s affirmation, Obi Wan goes on to find the planet. Granted, having Jedi mind powers would certainly make archival research easier. Films almost always portray protagonists as being successful in the archives — which, as many historians can attest, isn’t always the case.

The representation of archives and archivists in Star Wars II provides examples of common representation and narratives about archives and information professionals. For more Star Wars and information professional content I suggest rewatching Rogue One and thinking about how the plot revolves around data management. Even in a galaxy far, far away archives have a place, and the work of archivists matters.

Krista McCracken (They/Them) lives and works on Robinson-Huron treaty territory, in the traditional homeland of the Anishinaabe and Métis. Krista is a Researcher/Curator at the Shingwauk Residential Schools Centre and an editor of Activehistory.ca.

4 thoughts on “Archivists In The Movies – Star Wars II: Attack of the Clones”