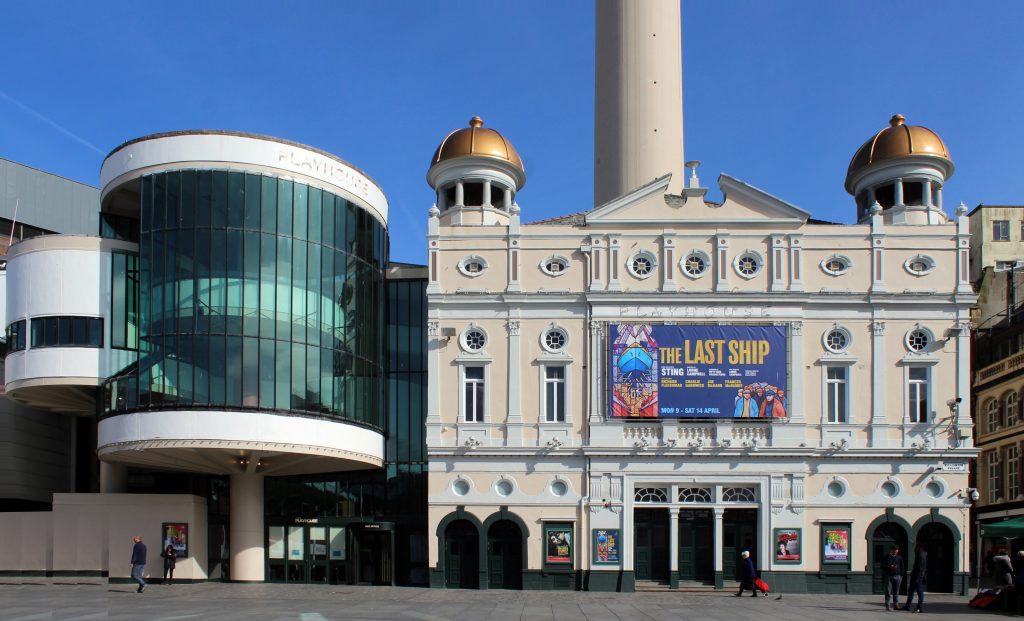 On a cold Monday morning in late autumn last year, nearly 30 first-year undergraduate History students from Edge Hill University visited the Playhouse Theatre in Williamson Square, Liverpool, UK. They delivered informal short presentations about major historical events including Napoleon at Waterloo, the rule of Margaret Thatcher, the suffragettes, and other historical figures such as Marie Curie.

This was the start of Edge Hill University’s partnership with the Everyman and Playhouse Theatres. Across the year, from autumn to summer, our History students developed a set of resources exploring the considerable changes of the Playhouse and Williamson Square over the last 150 years. Providing students in the Time Detectives module the opportunity to research historical documents such as newspapers, street directories, and maps, this partnership also gave them some time to think about how History is made public. The module introduces students to some of the tools and research methods that they need to develop to become independent historical researchers.

On this first visit, students were introduced to the history of the Playhouse Theatre by Allan Williams, Learning Manager, and Moira Callaghan, Theatre and Community Programme Manager. The Playhouse opened as a music hall called The Star in 1866. It later developed into a repertory theatre in 1911, earning its present name in 1917. Its internal architecture displays many aspects of Victorian social hierarchies, including stalls for gentlemen, the dress circle for women, and the gallery for Liverpool’s poorer population.

Opportunities for student historians to work in public spaces such as this encourages them to think about the public role of our discipline. Why do we study the past? How do we expect people outside of universities to engage with our research? What is the value of History to different sections of the public? What skills do student historians need to learn?

Hence, the visit to the theatre in the autumn was about the presentation of history on the stage. Allan facilitated a workshop about communicating to an audience. It involved exercises on stage, including having the students project their voices to the back of the auditorium, and culminated with students delivering their presentations. They were asked to act out an interview with a contemporary figure, an interview with a historian, and to provide a conclusion to summarise their argument. The highlight was a student pretending to gallop onto the stage as if Napoleon riding a horse, turn to the audience and declare, “I lost!”

Students had mixed feelings about the experience:

“I feel it was a wonderful yet weird way for us students to experience serious public speaking.”

“The Theatre offers a unique insight to the way the community around Williamson Square operated in History. Even the old seating plan gave us a view into the way society worked, Gentlemen separated from Ladies, both separated from the working class. I look forward to continuing to research the Theatre and hope to use the stage to my advantage.”

“I found it frightening.”

The end of course assessment, submitted in May 2019, involved students producing digital public history outputs that needed to be of value to theatregoers in the 21st century. Across the rest of the course, students planned, designed, researched, and thought creatively about the sorts of digital outputs that would educate, inform, intrigue, and entertain contemporary theatregoers. Their research could focus on the theatre itself, Williamson Square, or other aspects of Liverpool history relating to leisure, entertainment, and people involved in the theatre in some way.

The range and content of the outputs produced by students was incredible. It included digital art, digital magazines, films, Instagram accounts, Prezis, and podcasts. What they learned during this project was a sense of creativity and a willingness to play with the past and to perform it imaginatively, so that they were thinking about engaging with the public. This encourages students to think about what and who history is for, and how it is presented. This is shown in the examples here (a further example is available here on the Everyman & Playhouse partnership site).

Grace Marks’ film perfectly encapsulates the combination of rigor in research and performativity in presentation, as she explores the history women campaigning for the vote in Edwardian Liverpool:

Digital art by Thomas Bebbington, who explains “continuity is represented by the Playhouse Theatre itself, largely untouched architecturally since its construction … This is reflected by the changing of colour compositions (coloured plus black and white) to represent the past and the present across the theatre. The billboard has been replaced by a sketch of the ‘Star Theatre’ as it was seen in 1901.” The glass extension to the theatres was built in the 1960s. 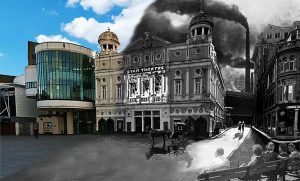 Working with a theatre has tremendous advantages. History students got to perform on stage. They became enactments of the past that took place in the very auditorium of that theatre. Students co-produced their narratives, rehearsed them, practiced projecting their voices, and performed under the gaze of the stalls, circle, and gallery in a historical setting. It was this experience that then inspired them to think about what History is for and how it is consumed by the public.

In turn, it means that they think about who the audience is for the historical work they produce and how they can best excite public interest in stories of the past. And they learn that partnerships outside universities offer access to different expertise and enable creative ways of thinking about History, further encouraging students to think about life after—and History outside of—the university space they currently inhabit.

Paul Ward is Professor of Public History and Community Heritage at Edge Hill University, UK. He is author or editor of five books including Britishness since 1870 (2004) and Co-producing Research: A Community Development Approach (2019) with Sarah Banks, Angie Hart and Kate Pahl. He is currently co-writing a book called Making History Together: A Practical Guide to Doing Collaborative Research, with Elizabeth Pente.