A friend of mine introduced me to this German word, which refers to the collective process of grappling with problematic truths of the past. This is happening in Canada as awareness of the Indigenous genocide grows.

That is the finding of both the Truth and Reconciliation Commission of Canada and the National Inquiry into Missing and Murdered Women and Girls in Canada.

Canada committed genocide. Canada commits genocide, as many others have also argued. I will return to this point in the second part of this two-part reflection.

I’m a university educator who, like many others, is trying to climb her way out of ignorance about how genocide has shaped Canada’s past and present. There is a lot to learn. I’m in the early days of this work, necessary work, if one is committed to unlearning and relearning for a post-genocidal world.

In this first part of my reflection, I share some of my personal history, including how members of my family, relative newcomers to Canada, were no strangers to state violence.

This is, of course, a partial self-reflection, one that no doubt falls prey to the practice of narrating oneself into the best light possible. I’m not sure how one extricates oneself from this problem, other than beginning with where one is at. This my beginning.

My mom was born to Volga Germans in a place she knew as Prince Albert, on Treaty 6 Territory for Cree and Western Region II for Métis, where numerous residential schools operated from 1867 to 1995. Her parents and their young children were born in Russia. They emigrated just before those left behind faced state violence, including massacres, enforced starvation, executions, and banishments. Some Volga German children were placed in orphanages after being taken from their parents who were being corralled into cattle trains. 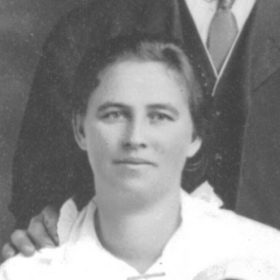 In this, what has been called the Volga German genocide, some of my ancestors were deported to Kazakhstan or Siberia or elsewhere, including to Gulags. Others were summarily shot.

On my father’s side, ancestors appear in James Joyce’s Ulysses. They are not named, but they are there, in the shadows of the archives, living at 84 Upper Dorset Street, a tenement house where my great-grandmother was born. She arrived in the world in 1867, a few months before the passing of the British North America Act, which set the stage for the aggressive roll out of residential schools.

I mention these details for a reason.

Nagle’s father is said to have been a landlord and a member of the Dublin Metropolitan Police that had been set up by the British Parliament in 1836. In this, my great-grandmother and her parents would be quite literally under London’s colonial thumb, as were those ancestors of mine who spent time in Dublin’s nineteenth- and early twentieth-century workhouses and prisons.

Patrick, my dad, was born in 1929, in the area where the Easter Uprising took place, in the heart of Dublin. It was a time of endemic child abuse that would endure for decades as the Irish State turned a blind eye. At the Irish State’s founding in 1921, there were an estimated 7,000 children warehoused in various institutions, including boarding homes. The government left them there and sent more and more along (Raftery and O’Sullivan, 2002, location 1147), knowing full well the children would suffer. In 1931, the government censored the Carrigan Report, a government study that exposed pervasive sexual violence against children. In suppressing the report, Irish State authorities, among other things, “protected the newly independent state’s legitimacy and reputation in the international arena” (Maguire, 2007, p. 81). Sacrificing the wellbeing of children, once again, the government sealed the fate of many.

Some people make connections between state violence against children in Ireland and the genocidal use of residential schools in Canada. They are not the same, of course, even though both emerged from British colonialism. 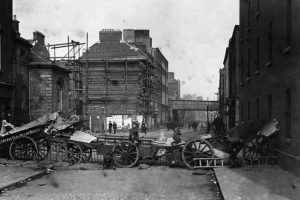 Photo: Children on a barricade during the Easter Uprising, 1916. Source: https://commons.wikimedia.org/wiki/File:Osteraufstand_-_Dublin_-_Barrikade.jpg

Patrick tried to escape crushing unemployment by leaving Ireland with about a half million others. It was the 1950s, otherwise known as the “lost decade,” the “decade of doom and gloom,” and the “worst decade since the famine” (University College Cork, 2019).  Grade eight education in tow, he arrived on the shores of the territories of the Haudenosaunee and Anishinabeg Nations at Montreal. Whatever hopes he had, the signage he came upon as he looked for work left no room for interpretation: “Irish need not apply.”

I was born on the lands of the Lkwungen, WSÁNEC, and Wyomilth Peoples in a place that I knew as Victoria, British Columbia. I waitressed (terminology at that time) for the better part of seven years after graduating from high school.

In the wake of the brutal early-1980s recession, I moved to Toronto, which I did not yet know was Tkaronto, a Mohawk word meaning “where there are trees in the water,” and toronton, a Huron-Wendat word meaning “the place of meetings” (Justice, Rifkin, and Schneider, 2010, p. 8).

I began post-secondary education at the age of twenty-five and became a particularly enthusiastic student: the kind that sits in the front row, goes to professors’ office hours, and stands at the entrance to the library waiting for it to open. I must have taken more than 20 courses on Canadian politics. I studied with many so-called luminaries.

I wanted to learn. I did learn.

And yet, three degrees later, I remained unaware of the Indigenous genocide.

To say that there were serious flaws in what I was taught at university is an understatement in the extreme.

Consider this. It was 1994, the year I started my doctorate.

A seminar with a celebrated professor had just ended. It had been tense. A student had challenged him. A few of us lingered in the hallway to talk about what had happened.

It was in that corridor, outside the classroom, there, at the University of British Columbia on Musqueam territory.

And it was that student, the one who’d questioned the professor. She was the one who told me about the existence of residential schools.

I remember this moment because I couldn’t comprehend what I was hearing. It was so far beyond anything I’d heard before. Beyond any of the reference points I had. Beyond my understanding. Children, because they were Indigenous, were being coercively sent to schools in some place far away from their families? How could that be? And why was it seemingly a secret?

Around that time, I briefly considered writing my dissertation on charter schools in the United States.

I abandoned the idea.

Schools, another professor advised, were not the stuff of political science.

Smith, James M. (2004). The politics of sexual knowledge: The origins of Ireland’s containment culture and the Carrigan Report. Journal of the History of Sexuality, 13(2), 208-23