During MISHI 2019 I stayed in Gore Bay and drove to M’Chigeeng each day. While making the drive on the first day, and every day thereafter, I noticed a half-dozen large stork-like birds in a meadow along the way. I slowed down and was able to identify them as sandhill cranes from their noticeable red cap. 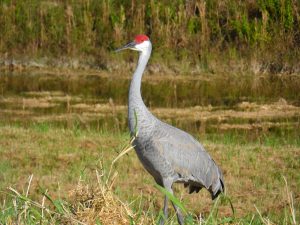 These birds I knew from my youth, when I would occasionally see them flying over our farm in Kent County, southwestern Ontario. There was no mistaking them since, aside from blue herons, they were the largest bird to be seen in our skies. I seldom got to see them up close because they did not remain in our area, which was heavily cultivated and did not offer suitable nesting sites. Certainly I was never as close to them as those days going back and forth to M’Chigeeng, when I would sometimes stop the car and get out to watch them.

The Crane Doodem from the Great Peace of Montreal, 1701.

From Heidi Bohaker and Al Corbiere’s work I knew that the crane doodem was often to be found on colonial-era documents, and that Anishinaabe leaders were often drawn from the crane clan. Reproductions on display at the Ojibwe Cultural Foundation (OCF) confirm that treaty signatories using the crane doodem often signed first.

At Wiikwemikoong, Josh Manitowabi, taught us that the members of the crane clan were considered especially gifted in providing leadership regarding relationships with other communities. The height of the crane—adults reach 4.5 to 5 feet—meant that when standing erect it could see clearly in all directions. This visual metaphor suggested that those of the crane clan could see the “big picture,” rather than just focusing on local concerns.

I decided to do some research on the bird to understand why the Anishinaabe regarded it as so special. Everything I learned confirmed that the sandhill crane is worthy of the high regard in which it was traditionally held.

The sandhill crane is a great symbol of the persistence and resilience of Indigenous peoples. It is the oldest bird fossil identified in North America, with specimens dating back ten million years. And it has an extraordinary range. I do not know what its range was millennia ago, or if the Anishinaabe knew the full extent of its travels, but its geographic spread today makes it even more appropriate as a symbol of expertise in external affairs. While there are some populations in Florida that do not migrate, large numbers that winter in Texas and Mexico nest in the summer in huge swathes of Canada, from the upper Great Lakes to the Rockies to the high Arctic, including most of Baffin Island. Some even cross the Bering Strait and breed in Siberia before returning south. 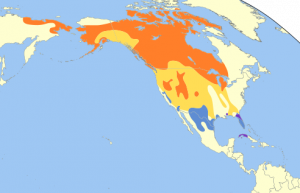 Unlike the only other type of crane in North America, the whooping crane, which was nearly extinct by the 1940s and is still highly endangered, the sandhill crane population is estimated at well over half a million. It is increasing its northward range as a result of climate change, though in other areas its range is shrinking due to habitat loss.

I have not been able to discover why the fates of these two types of crane have been so divergent over the last century when they are similar in so many ways, such as diet, reproductive habits, and the types of predators that prey on them.

I was aware of the elaborate courtship dances of the sandhill crane before attending MISHI, though I have never seen them live. What I did not realize until recently is that these cranes mate for life (their lifespan is about twenty years), and that couples continue to perform different kinds of dances with each other over the course of their “marriage.” Scientists hypothesize that these are a way of affirming their lifetime bond. These traits, so apparently similar to human rituals, may have suggested to Indigenous peoples that these birds possessed an intelligence and “culture” that entitled them to great respect.

In any case, I was delighted to renew my acquaintance with the sandhill crane while at MISHI and to learn what an important role they play in Anishinaabe history and culture.