At the cancelled Congress 2020, Olivette Otele was scheduled to deliver the Canadian Historical Association’s keynote address. Otele was recently appointed the first History of Slavery professor at Bristol University. Her immediate research will examine Bristol University’s historical ties to the transatlantic slave trade.

A growing number of universities are detailing institutional links to slavery and showing why those ties continue to matter. At McGill, two postdoctoral fellows have been recruited to research institutional connections to slavery and colonialism. In Halifax, scholars conducted a slavery inquiry at University of King’s College. And the recently completed Lord Dalhousie report revealed that 30% of Dalhousie University’s original endowment came from taxes levied on slave-produced goods.

Our would-be Congress hosts might take inspiration and apply their attention to the late 20th century period my first two posts addressed.[i] Western University’s Department of History has its own institutional history problem. It has to do with racism and commemoration.

As Asa McKercher first noted on ActiveHistory, Western University’s Department of History received $750,000 from Kenneth Hilborn’s estate in 2016. A series of scholarships were named after the former University of Western Ontario (UWO) history professor, whose career stretched from 1961 to 1997.

The Department website explains the donation in terms of Hilborn’s “love of both history and his students.” There is no accounting of Hilborn’s career and views. It is a galling omission – especially from a department that champions its public history program.

Though an ultimately obscure figure, Kenneth Hilborn combined his work as an international relations historian with unrelenting fringe-right activism. And though he would have denied it, the central tenet of his intellectual project was white supremacy. 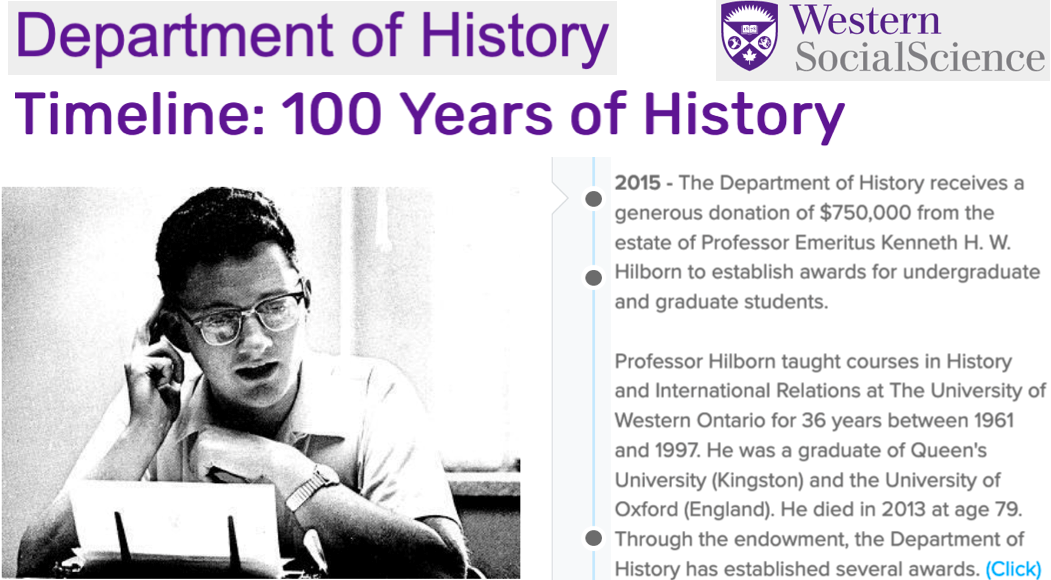 In the 1960s, Hilborn moonlit as a Cold War columnist at Canada Month, a right-wing current affairs magazine. He coupled unreconstructed McCarthyism with advocacy of firmer anti-communist intervention in the decolonizing world.

Above all, Hilborn defended “Western civilization,” which he felt guarded liberty and rested “on the overriding responsibility of the individual to God – to an eternal moral order.”[ii]

The idea of a common Western civilization gained new salience in the 1940s, as American interventionists worked to link the interests of North America, Britain, and Europe. During the early Cold War, that project was given institutional credence by the formation of the North Atlantic Treaty Organization (NATO). Democratic, liberal, and “Judeo-Christian” values were said to unite the Atlantic world.

This was “white Atlantic,” historian Quinn Slobodian has argued. It was invested with assumptions of cultural superiority and buttressed by notions of “Anglo-American” unity, an idea first pushed in the early 20th century by those dreaming of the dominance of the Anglo-Saxon race.

Historian John Price has underlined that Atlanticism was essential to Canada’s postwar foreign and immigration policies. However, anti-colonial and civil rights movements challenged hierarchical racial order on a global scale. From the late 1950s, white supremacy – even veiled by the language of cultural superiority – was no longer tenable as an express justification for policy.

Yet Hilborn was among the self-described conservatives who held fast to the racial assumptions baked into a defence of Western interests and values. Condemning those “obsessed” with racial equality, Hilborn recurrently defended apartheid and white-minority rule in southern Africa against the spectre of “black domination” posed by “one man, one vote” democracy.[iii]

From the 1980s, Hilborn began to cultivate far-right ties. He started publishing pamphlets under the imprint of Canadians for Foreign Aid Reform (CFAR), one of the front organizations run by white supremacist Paul Fromm. As Asa McKercher explains, Hilborn’s pamphlets offered broadside attacks on multiculturalism (“a doctrine that portrays all cultures as equally valid and worthy of respect”), feminism, and any other element of “collectivist-egalitarian ideology.”[iv]

Hilborn joined the Northern Foundation, whose bland geographic name doubled as a dog-whistle alluding to Nordicism. The Foundation united disparate Canadian right-wing activists in a defence of apartheid in South Africa.

Hilborn participated in a meeting of the World Anti-Communist League (WACL), a global far-right network created in 1967 and funded largely by the South Korean military junta. WACL affiliates included anti-Semitic and fascist organizations from around the world, while it counted Latin American contras, death squads, and paramilitaries among its friends.[v]

Hilborn also brought his views to campus, where, over several decades, he more than once disrupted student events he considered to be leftist. Whether student activists supported divestment from South Africa or directly challenged Hilborn’s political activities, Hilborn’s own autobiographical account indicates that he relied on bullying, intimidation, and insult to assert the intellectual and ideological superiority of his views.[vi]

Hilborn was also a bitter foe of employment equity at UWO, a defender of Philippe Rushton, and an active member of the Society for Academic Freedom and Scholarship (SAFS).

Like other ex-Cold Warriors, Hilborn eventually transitioned to Islamophobia and what Samuel Huntington called “the clash of civilizations.” In his one stab at futurist fiction, Hilborn wrote about Shenandoah Windsor, a royal heroine who managed to save the Anglo-American world from the combined threat of “the secular left” and Islamic “fanaticism.”[vii]

According to Hilborn, his views were always “thinking” and “rational.” He dismissed out of hand the suggestion that his beliefs were extreme. And “racist,” he wrote, was merely a leftist term of abuse.[viii] Again and again, Hilborn left the impression that he thought those who disagreed with him were ridiculous and stupid.

What remedy should the Western University’s Department of History pursue? Give the estate money back? Take Hilborn’s name off the scholarships? Give the awards more pointed titles? Maybe. The Kenneth Hilborn Scholarship for Anti-Racist and Feminist Research does have a nice ring to it.

No, the best remedy is history. The department should produce and make publicly available a critical appraisal of Hilborn’s career and activism, perhaps accompanied by an annotated bibliography.

If Bridging Divides was the anti-racist aim of Congress 2020, the Department of History at Western should do its part by being frank about its own institutional history.

In death, Kenneth Hilborn wanted to be the Department of History’s benefactor. In life, Hilborn was a racist who would deny being racist, a historian who extolled “Western civilization” and naked Cold War imperialism, and an activist who tried to legitimate fringe right-wing beliefs on campus and in wider political discourse. Something more than a blithe acknowledgement of the late historian’s largesse is necessary. Let the man be remembered.

Will Langford is a Grant Notley Memorial Postdoctoral Fellow at University of Alberta.

*Speaking of commemorative scholarships and institutional history, Grant Notley (in whose honour my postdoctoral fellowship is named) was leader of the Alberta NDP and an MLA first elected in 1971. Drawn into the “new party” movement when he was a University of Alberta student, Notley was a reform-minded pragmatist who believed that democratic state policies should promote social justice and foster a growing mixed economy diversified beyond the oil industry. Stridently anti-communist, he also ignored the critiques of New Left activists. Yet in a provincial legislature dominated by a single party, he was a champion of the poor and disempowered. He represented a northern electoral district, and he took a keen interest in rural poverty and Métis rights. Notley was killed in 1984 in a small plane crash near Lesser Slave Lake. His daughter, Rachel, is currently leader of the Alberta NDP and Leader of the Opposition.

[i] My thanks to Shirley Tillotson and Tom Langford for their comments on a draft version of the three-post series.

[vii] Kenneth H.W. Hilborn, Nightmares and a Dream: A Story of Future Threats to Western Liberty, and How Liberty Might Win (Rexdale, ON: Citizens for Foreign Aid Reform, 2008).

[ix] Departmental icon? My word choice is deliberately provocative. What is the relationship between departments and the people they honour with commemorative scholarships? At the very least, named scholarships, which are paid out to graduate students who then list the awards on their curricula vitae, are part of how departments present themselves. By reflexively accounting for their icons, departments can overcome the historical silences of commemoration that is minimally descriptive or of a dedication-on-a-park-bench variety.

5 thoughts on “Congress 2020, Interrupted: Racism and Commemoration in Western University’s Department of History”