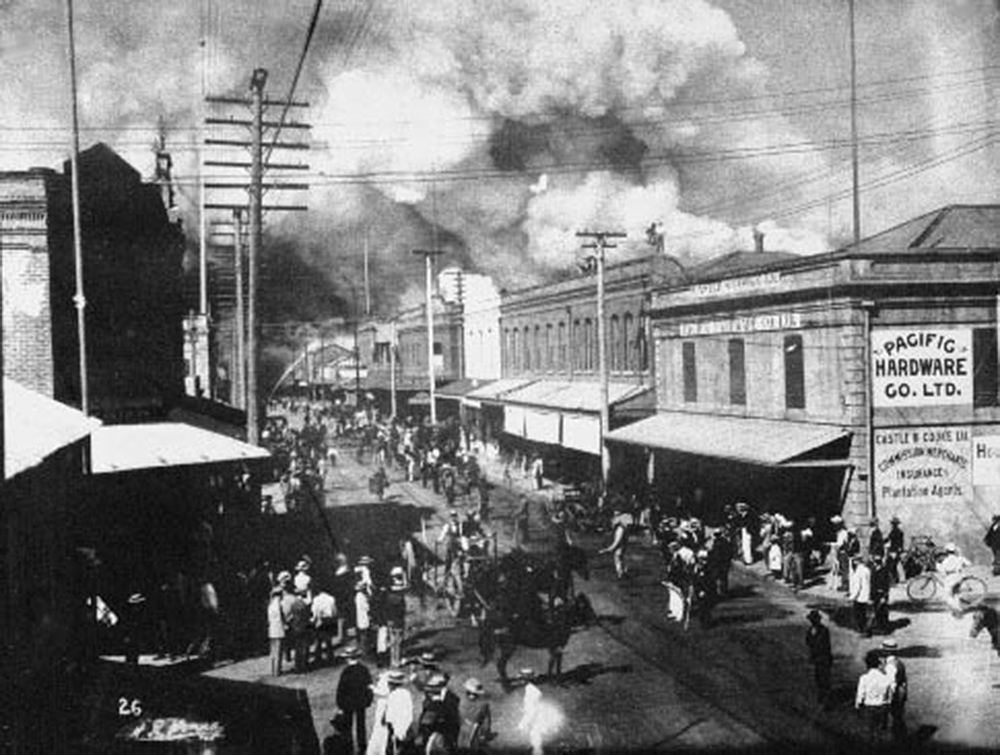 Smoke from a “controlled fire” in Honolulu, 1900, Hawai’i State Archives.

More than a century before the global outbreak of Covid-19, another deadly disease struck Honolulu, one that ignited the tragic unfolding of many stories about public health, urban fires and social inequalities, particularly racism.

The bubonic plague, also known as the Black Death, hit Honolulu’s crowded and throbbing Chinatown in December 1899 when it took the life of one of its first victims, You Chang (or Yon Chong), a twenty-two-year-old bookkeeper at a general store. The disease had been spreading slowly in Asia in the 1870s and reached commercial cities in southern China such as Guangzhou and Hong Kong in the 1890s, before reaching Honolulu and later, San Francisco. Steamship freighters that departed from these Chinese port cities for Honolulu may have carried rats and fleas on board with their cargoes, and this could have been the source of the spread of infection to Honolulu.

Hawai‘i’s Board of Health, which counted physicians Nathaniel Emerson, Francis Day and Clifford Wood among its members, acted quickly and its recommendations were endorsed by President Sanford Dole of the newly annexed U.S. Territory. But the measures raised sensitive issues. Given that the early victims were Chinese, calls arose for the destruction of the entire Chinatown, which was viewed as a hotbed for the plague. The Board imposed a strict quarantine on Chinatown and ordered the National Guard to enforce the confinement at the point of bayonets. Despite its name, Honolulu’s Chinatown at the turn of the twentieth century was a mixed neighbourhood of almost exclusively non-white residents. Between 6,000 and 10,000 Chinese, Japanese and Kanakas (native Hawaiians) lived and worked there. The Citizen’s Sanitary Commission, entrusted with oversight of the health of Chinatown residents by the Board of Health, sent Kanaka, Chinese and Japanese residents from areas in the district deemed infected to a disinfection station, before moving them to a quarantine station. At the disinfection stations, all men, women and children were stripped naked, sent to a fumigation shower and endured an intimate physical inspection in plain sight. White guards watched the Chinatown evacuees being processed in this brutal and dehumanizing manner. Merchants and residents alike suffered extensive losses, for any valuables—goods, furniture, clothing and all other belongings—that they left behind or had been taken away at the disinfection stations were never returned, as they were pilfered, damaged or simply perished. 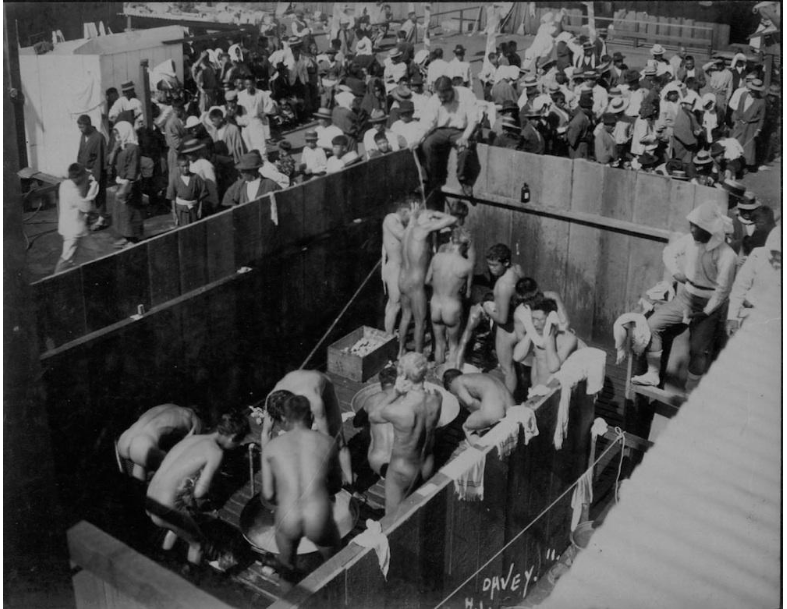 On New Year’s Eve, two weeks after the death of You Chang, the Board of Health moved to begin rarely used controlled burnings of a whole bloc of homes and shops to try to remove the plague-ridden sections of Chinatown. On January twentieth, the Board proceeded to conduct the burning of yet another bloc. However, swept up by strong winds, the blaze roared out of control and spread throughout the district all the way to the wharf, razing one fifth of Honolulu’s buildings. The people in Chinatown ran for their lives but were horrified to discover that they were not allowed to leave the area even during the inferno. Guards, police officers and white citizens, all armed, forced anyone trying to escape back into the blazing quarantine zone.

Yamashiro Matsutaro survived the fire but saw the hotel that he had recently purchased burn to the ground. This native of Hiroshima prefecture in southwestern Japan had arrived in Hawai‘i ten years earlier and had worked on two sugar plantations on the island of Maui before moving to Honolulu where he purchased his hotel from a compatriot. The conflagration reduced ten other Japanese hotels in the area to ashes, along with several hundred other commercial, religious and residential buildings, owned for the most part by Japanese and Chinese. All together eight thousand people, mostly Chinese, Japanese and Kanakas, were made homeless and were then displaced to detention camps. After the disaster, the Board of Health set an additional thirty controlled fires.

The plague and the big fire in Honolulu remind us about the uneven consequences of an epidemic and how the dangerous cocktail of race, class and disease has a long history, both urging us to think about unequal consequences of the current pandemic and the manifestation of a somewhat similar racism 120 years later. To be certain, Asian and Indigenous residents in Honolulu’s Chinatown were not the only victims of the burning a century ago. Four whites in wealthy residential areas also lost their homes to fires set by the Board of Health, although suspected white victims of the plague were housed in posh hotels rather than in disinfection camps. Japanese and Chinese evacuees fought for compensation for the damage and only won it four years later. Yamashiro, for his part, later relocated his business closer to downtown, built a new hotel and named it Yamashiro Ryokan, or Yamashiro Hotel. Nevertheless, as historian Dorceta E. Taylor points out, the decision of Honolulu’s Board of Health to set fire to parts of Chinatown and the ways that Asian and Indigenous evacuees were treated are an important reminder of racial divisions. The racialization of disease could be facilitated by the fact that the outbreak overlapped with the area where nonwhite residents lived and were the voices of the overwhelming majority carried little political weight. The Board succumbed to the pressure for action and to heightened racism and inadvertently precipitated, in the words of historian James C. Mohr, the “worst civic catastrophe” in Hawaiian history and one of the worst disasters initiated in the name of public health by American medical officials.

A caveat about racialization of epidemics is nothing entirely new. But its impact on the issues of race presses us at a critical moment, as the current U.S. President has attempted to reinvent the coronavirus as the Chinese virus and as an African American man was murdered under the knee of a white police officer. Once again, this pandemic has heightened the deep-seated inequalities of racialized violence against all minorities. It is also magnifying anger, indignity and protests among people of all shades in the United States and around the world, including Canada.

Yukari Takai is a Research Associate at the York Centre for Asian Research at York University in Canada. As a historian of migration and Asian diasporas, she is conducting SSHRC-supported research on Japanese transmigration in the Pacific world in the late nineteenth and early twentieth centuries. Currently, she is working on the Japanese immigrant hotels in Honolulu.