In January 2007, Canadian mining giant Teck Cominco (since rebranded Teck Resources) donated $10 million to the Royal Ontario Museum (ROM) in what was “the largest corporate gift in the museum’s history.” The donation went toward the creation of three new earth science galleries, allowing the museum to double the number of minerals and gems it could display to the public and endowed a curator to design exhibits for the galleries.

At the same time, the donation allowed the Canadian Mining Hall of Fame (CMHF) – an industry initiative to celebrate the contribution of mining to Canadian history – to open a new “interactive, digital exhibit” at the museum. Teck president Donald Lindsay noted that, “Bringing the Hall of Fame to the new ROM is a natural fit, complemented by exhibits that investigate the link between earth’s resources and everyday life.” Yet, although the CMHF recognizes “individuals from all facets of the mining industry,” its selection of “industry leaders” is notably slanted. All 170 of the CMHF’s inductees come from the business side of mining.

Corporate sponsorship in the cultural sphere is hardly uncommon. For museums, it is altogether typical. Many prominent museum websites display the logos of their “global partners” and “corporate supporters.” London’s British Museum goes so far as to entice potential corporate suitors to “partner with a global icon,” boasting of “the unique sponsorship opportunities” it can offer “as one of the most recognised and respected cultural brands.”

Yet, such partnerships come with a cost. Legally bound to maximize shareholder value, corporations rarely give without expecting something in return. As one museum director put it, “Sponsorship is a commercial arrangement … and the sponsorship partner pays a fee. It’s not a grant.” What do corporations expect from their partners? According to a 2015 Harvard Business School study, sponsorship agreements can offer corporations “access to cultural, symbolic, and social resources, which can add value” to the products and services they offer. In other words, partnerships are another form of marketing, a way to enhance or legitimise a “corporate brand.”

The attractions of museum partnerships to the mining industry are plain to see. Few, if any, mining companies, have a desirable image. Mining is the prototypical “dirty industry.” Long a major polluter, mining is increasingly associated with human rights violations and the dispossession of Indigenous peoples.

The implications of corporate sponsorships for our collective understanding of the past are troubling. If mining companies hope to enhance their image by partnering with major cultural institutions, what are the curatorial and historical implications? Do museums maintain curatorial control and offer visitors a balanced assessment of histories that intersect with the interests of corporate sponsors? There are obvious reasons for skepticism. 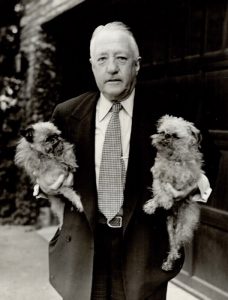 My own misgivings with the CMHF stem not only from studying the mining industry’s impact on Ontario’s environment, but also from coming to know the worldview of one of the Hall’s inductees – John E. “Jack” Hammell, a gold mine owner – while carrying out archival research for my doctoral dissertation. Hammell maintained a steady correspondence with former Ontario Mines Minister, Treasurer and, ultimately, Premier Leslie Frost during the 1940s and 1950s. Hammell may well have been an “industry leader,” but his correspondence with Frost reveals that he espoused values that many museum visitors would find troubling.

According to his CMHF profile, it “was Hammell’s ambition ‘to crack open the north.’” His initiative “to harness the potential of the airplane … opened the floodgates to mineral exploration.” He was a driving force in the formation of Northern Aerial Minerals Exploration, a prospecting outfit with 34 bases across the country that made “some of Canadian mining’s greatest accomplishments through the exploits of [its] bush pilots.” Perhaps Hammell’s biggest success came in developing Howey Gold Mines, a profitable “mainstay” in the Red Lake gold mining camp in the province’s northwest.

But Hammell’s online profile glosses over much of his legacy. Consider Hammell’s attitude towards organized labour. Hammell’s correspondence clearly articulates his views on  union organizers. For him and his mine managers, union organizers were “slimy creatures” and “filthy characters” whose only concern was to “collect their Union Dues.”[i] Hammell saw union organizing drives in Ontario’s gold mines as evidence of an international communist conspiracy: For Hammell, unions were not after improved wages and working conditions in a notoriously hazardous industry. Instead, they were “really after the [province’s] strategic war materials,” the uranium mines. In Hammell’s view, there was only one solution to this menace: Outlaw the Communist Party and throw the “red union leaders” out of the country.

Hammell’s anti-union views are detailed in another letter, where he waxed nostalgically of the good old days when Premier Mitch Hepburn meted out his own brand of tough justice to “those American goons” who dared to organize southern Ontario’s auto plants. Hammell encouraged Frost and his Attorney General Dana Porter to follow Hepburn’s proven method of dealing with union “thugs”:

You may remember, he hired about twenty tough babies to go to Oshawa, and they each took a bat with a thong around their wrists, and he instructed them to slug them and knock them down and then drag them out by their heels. They broke up the strike.

Hammell’s anti-union views are not the only thing his CMHF profile neglects. It is also silent on his anti-Semitism. In another memo to Frost, Hammell derided the “New York Hebrew crooks who came into mining in Canada, riding on our backs,” singling out the famous Wall Street financier – and fellow CMHF inductee – Joseph Hirshhorn with particular venom. Likewise, his assessment of US President Dwight Eisenhower was similarly tinged with a racist bias:

I think [Eisenhower] is being led down the garden path by the international bankers (jews) who have been controlling the world since before Christ.[ii] Unfortunately, they have Eisenhower fenced in to the point that he more or less has to do things along the lines they want. Eventually he will have to go to the people and tell them just what it is all about, but I don’t think he is strong enough to counteract those boys.

Hammell’s profile is not the only example of the CMHF’s  rather partial interpretation of Canadian mining history. But, perhaps the clearest indication of the Hall’s bias is the lack of diversity among its ranks.

Alongside this silence, the Mining Hall of Fame’s veneration of industry leaders forces us to ask ourselves: Are corporate sponsorships like Teck’s compatible with the ROM’s mission to advance “our understanding of the artistic, cultural and natural world?” Allowing private interests to define our collective history surely comes with a cost.

Matthew Corbeil is a doctoral candidate at York University. His dissertation, scheduled for defence in June, examines the political power of the Ontario mining industry.

[ii] To clarify, the parenthetical reference to “jews” here was drawn from Hammell’s original letter.

2 thoughts on “John E. “Jack” Hammell and the Canadian Mining Hall of Fame”