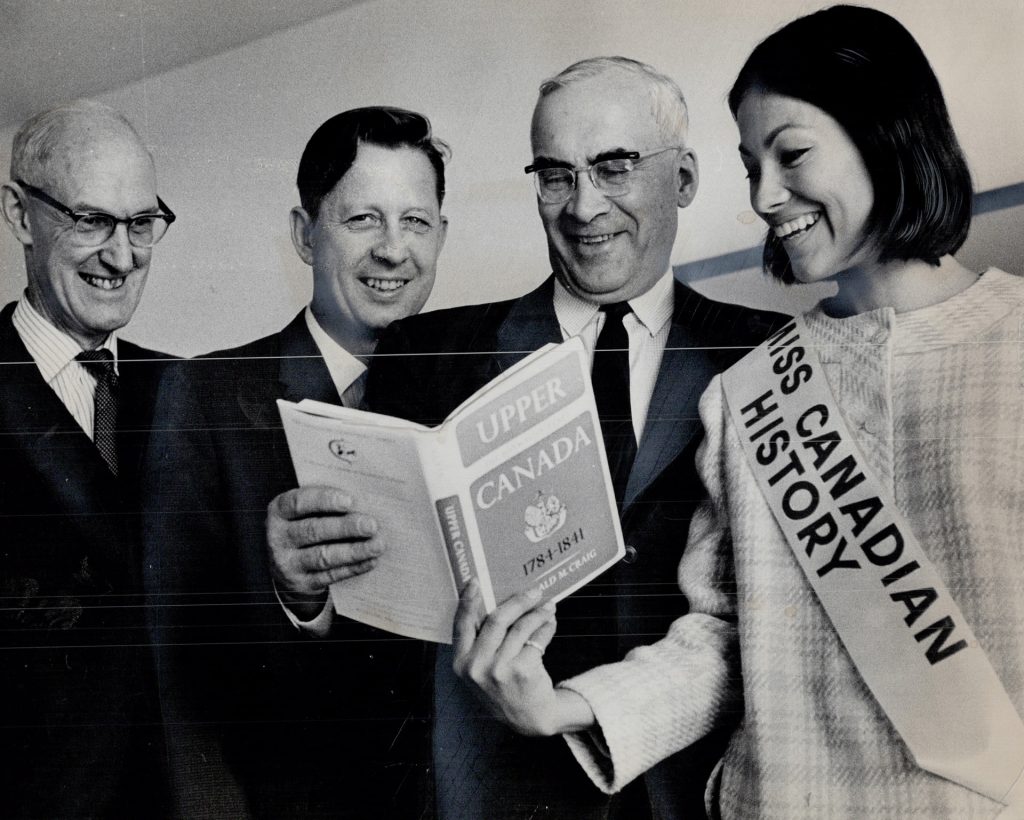 Archive stories are stories about, well, archives, the things that we find in them, and the things that we know we will never find. They are also invitations to reflect on how and why archival evidence – from a routinely-generated source to a single photograph – was created and what it can and can’t tell us about the past.

This archive story begins with a text: “Look at what Erin Millions found.” A post-doctoral fellow at the University of Winnipeg, Erin had spent the evening preparing a lecture on Indigenous women’s activism. Searching for images of Kahn-Tineta Horn, an Indigenous rights activist from Kahnawà:ke, Quebec, she discovered what she described as an “amazing” photograph in the Toronto Public Library labeled “Kahn-Tineta Horn and Professors.” A few minutes later, she tweeted it. Texting me a screen shot of Erin’s tweet, Adele Perry added, “So much to say here.”

Indeed, there is, making this photograph a story about race, gender, Indigeneity, and the writing of Canadian history.

Although he does not appear in the photograph, publisher Jack McClelland was the impresario behind it. A shameless promoter of authors and their books, he loved to stage events and stunts, the next more outlandish than the last, insisting that there is no such thing as bad publicity. It’s not clear who came up with the idea, but everyone seemed to think it was a good idea. What could be better, McClelland’s advertising manager asked, “than a girl who is not only beautiful but who belongs to the race of original Canadians?”[1]

With that, McClelland hired Kahn-Tineta Horn, then a Montreal model, to appear at a June 1963 press conference to launch the Centenary Series, a multi-volume history of Canada to mark Canada’s fast-approaching centenary. Wearing a Jackie Kennedy-like dress and a beauty pageant sash, she posed as Miss Canadian History with three historians, Donald Creighton, Gerald Craig, and W.L. (Bill) Morton.

“Sex sells lots of novels,” wrote The Globe and Mail’s Bill Deacon, “but until this week I had never heard of it being used to promote a distinguished history series.” Using sexist language, he described Horn as “lissome” – meaning “thin, supple, and graceful” – and as “the centre of attention” – no one was interested in the “eminent historians” except for the “near-sighted and the over-aged.” He then drew on the racist and harmful stereotype of the promiscuous Indigenous woman, when, with an adolescent nudge nudge, wink wink, he wondered what might have happened had Jacques Cartier met Kahn-Tineta Horn. Why, he said, it may have changed the whole course of Canadian history.[2]

Writing in the The Toronto Star, Frank Moritsugu confessed that he wasn’t particularly interested Canadian history, “until yesterday,” that is, when he went to an event featuring Miss Canadian History, who, someone had assured him, was a piece of “high-class cheesecake.” But Miss Horn, he said, “is intelligent as well as comely” and he is now “a history nut.”[3]

Hardly innocent, the language of the Globe and Mail and the Toronto Star belonged to what the National Inquiry into Missing and Murdered Indigenous Women and Girls called the hypersexualization of Indigenous women, a process that directly contributed to the violence they experienced.

What exactly was the Centenary Series? Conceived in 1955, it was, to use The Star’s phrase, a history nut’s dream: a multi-volume, multi-author, definitive history of Canada. It was also very much a product of its time and place. As Executive Editor, Bill Morton wanted the series “to re-emphasize the British connection and the European heritage of Canada.”[4] A few years later, in a short piece to promote the series, he referred to Canada’s “essential character” as English and French.[5]

This didn’t leave a lot of room for Indigenous peoples. Even before the first volume was published – as Lyle Dick discovered in the course of his research on the series – the Indian Eskimo Association of Canada asked the extent to which the series will provide “a reliable account of the contribution of our Indians to the development of Canada.” (Parenthetically, the reference to “our Indians” points to the mostly non-Indigenous, if well-intentioned, membership of the IEA.)  Morton assured the IEA that the authors will give it all of the attention that they can, before quickly adding that anthropological and sociological treatments are “not to be expected.”[6]

Morton had a point. Both the individual volumes and the series itself were to be synoptic and, in the 1950s and 1960s, there was very little historical writing about Indigenous peoples to draw on. With one or two notable exceptions, the profession’s assumption was largely Donald Creighton’s assumption in The Commercial Empire of the St. Lawrence: Indigenous peoples were destined to disappear. “White settlement had conquered the empire of the St. Lawrence,” he wrote, “and the Indians had been driven before it, driven irresistibly through defeat and shame towards their final degradation – towards the reserve, the shapeless alien clothes, the crafts debased and meaningless in a new age, and the dull, uncomprehending, haunted search for something which had irrevocably vanished.”[7]

In their introduction to Gerald Craig’s volume, the seventh in the series but the first to be published, Bill Morton and Donald Creighton made a fascinating, if unintentional, observation. Upper Canada: The Formative Years, they said, addresses “the adjustment of French and English institutions, the relations of church and state, [and] the claims of imperial unity and colonial responsible government.” These, they proclaimed, drawing on the authority of the white male voice, are “the great issues of Canadian history.”[8]

In many ways, The Formative Years was – and still is – a very good book. In his fab introduction to a 2013 edition, Jeff McNairn notes that Craig’s “treatment of Upper Canadian politics has not been superceded in the intervening five decades.” Incredibly, it remains the first and only “single-volume scholarly history of Upper Canada.”[9]

But as McNairn points out, no book is perfect. For example, Indigenous peoples make only a handful of cameo appearances in The Formative Years before disappearing altogether after the War of 1812. Especially jarring are Craig’s descriptions of early Upper Canada as “almost untouched by civilization” and “empty.”[10]

In The Kingdom of Canada – which was not part of the Centenary Series but which was launched beside The Formative Years – Morton used similar adjectives, describing the North West as “empty,” the Pacific Slope as “vast and empty,” the Arctic archipelago as “vast and vacant,” and the Plains Indians as “doomed,” their “primitive minds” unable to comprehend what was happening. The language of emptiness and inevitability was easy and exculpatory: no crime had been committed because no one had been here and, even if they had been, they were primitive, outside the march of civilization, and therefore doomed, in Morton’s historical calculus, to “vanish.”[11]

“Militantly proud of her Indian heritage,” to quote the Toronto Star, Kahn-Tineta Horn knew that the northern half of North America was never empty and that her people were never primitive.  Refusing to play the role of the beautiful but retiring woman, content to look nice while the men discussed responsible government and the other great issues of Canadian history, she brilliantly used the press conference to promote her own project: “an Indian history of Canada.” To negate the image of her people as “savages,” she said, she wanted to write a book for the general reader that would be inexpensively produced and widely distributed.[12] In ways that Morton, Creighton, and Craig could never understand, Horn understood what it is like to be erased, to be transformed by the authority of the male voice and the authority of the historian’s voice into an unreliable witness to her own experience and to her own history.

A year later, Peter Gzowski profiled Kahn-Tineta Horn in Maclean’s, describing her “one-girl campaign to improve the Indians’ lot” as “furious.”[13] That campaign, with its many twists and turns, from the Red Power Movement and the Indian Legal Defence Committee of the 1960s and early 1970s to the Oka Crisis and the standoffs over land in the 1990s and 2000s, is the subject of Coffee With My Ma, a podcast by Kaniehtiio Horn, Kahn-Tineta Horn’s daughter. In part, it’s also the subject of writer Paul Seesequasis’s ongoing project to tell the stories behind archival photographs of Indigenous peoples.

Although Horn never finished her book, she has led a fearless life: she didn’t have to write history; she made it.

Donald Wright teaches history and politics at UNB and is the author of Canada: A Very Short Introduction.