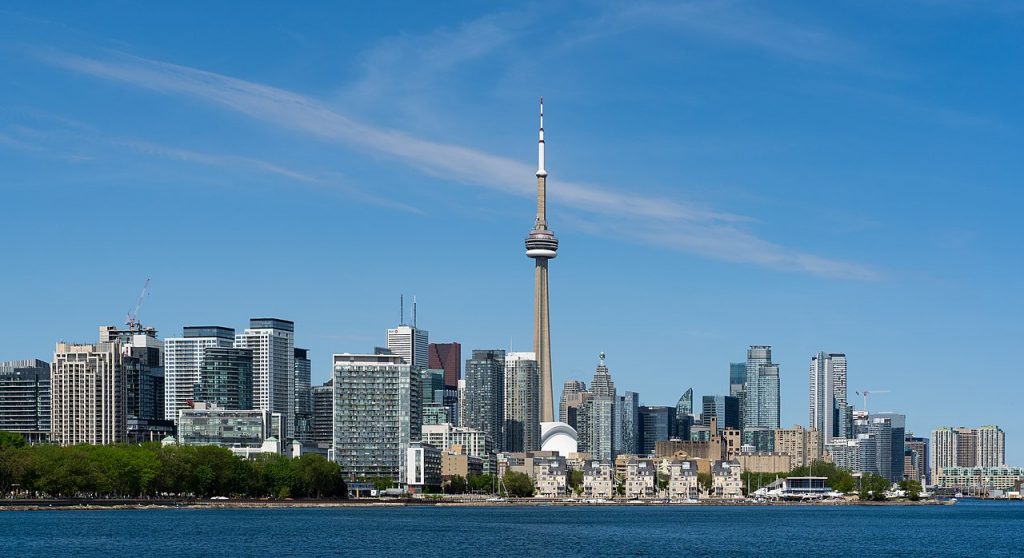 Toronto, ON, is the beating heart of Canadian finance capitalism. Global investment banks, mining companies, and consultancy firms dominate the downtown corridor and the Greater Toronto Area (GTA). The city is also home to several professional sports teams, a robust restaurant scene spread out across dozens of unique neighborhoods, and numerous cultural venues that all make Toronto a cosmopolitan destination for knowledge workers as well as an ideal place to park transnational capital. It is truly, in the words of Saskia Sassen, a “global city.”[1] Like other global cities (New York, London, Hong Kong, Tokyo, or San Francisco), Toronto’s housing market experienced unprecedented growth over the past twenty years – weathering both the 2008 financial crisis and the 2020-21 Covid-19 pandemic. According to a recent article in The Economist:

the buying, selling and building of homes in Canada takes up a larger share of the economy than it does in any other developed country . . . It also soaks up a larger share of investment capital than in any of Canada’s peers. Canadians’ mortgages have helped create one of the largest consumer debt piles in the world, and its financial system’s exposure to those loans is twice that of the U.S. With prices already at record levels, Canada’s housing market kicked off 2021 by going into overdrive, posting annual gains of 30% in many communities across the country.[2]

Individual homeowners in Toronto benefit from Canada’s housing bubble (at least in the short term), but he city’s buoyant real estate market masks widespread housing insecurity and structural inequality hidden behind the veneer of seemingly infinite growth. Housing costs greatly exceed the capacity of average wage-earners to live comfortably or securely. Since 2016, no fewer than 47% of all tenants in the city lived in apartments that were deemed unaffordable – defined as spending more than 30% of income on rent. Excessive rent obligations hinder tenants’ ability to save for emergencies or retirement; failure to meet rent obligations ultimately results in eviction. A significant percentage of Toronto’s working tenants lived paycheck to paycheck even prior to the Covid-19 pandemic. When the unemployment rate doubled over the course of 2020 due to Covid-19, many families – including countless essential workers otherwise celebrated in the media – were unable to pay outrageous rents and quickly found themselves vulnerable to eviction.[3]

Evictions exacerbate social harm. They have a detrimental effect on mental health. They disrupt critical social and kinship networks. They can lead to unemployment and homelessness. Toronto’s eviction regime disproportionately affects racialized and other marginalized communities, compounding the adverse effects discrimination in the labor and housing markets as well as in the criminal justice system. According to an independent report from the Wellesley Institute, for example, census tracts with a higher percentage of Black renters “have significantly higher eviction filing rates.”[4] Policies designed to facilitate private accumulation at the expense of human accommodation thus render communities already suffering from resource deficits even more precarious. In the context of a global pandemic, evictions also put both impacted families and the broader community at risk.

The Covid-19 pandemic has only compounded the intrinsic inequalities of racial capitalism.[5] Throughout 2020-21, public-health authorities have instructed people to “stay home” while many landlords worked diligently to evict tenants from these same homes. On March 17, 2020, Ontario’s provincial government instituted a moratorium on evictions, but it was lifted only five months later despite pleas from tenants and tenant organizations.[6] Further, the moratorium never actually precluded landlords from filing eviction notices. The Landlord Tenant Board (LTB) had 8,323 pending eviction applications by the end of August 2020. Two months later, at the height of Ontario’s second wave, the LTB conducted 2,900 eviction hearings stemming from the non-payment of rent. Low-income renters subject to these dubious proceedings encountered numerous barriers to meaningful participation: technical difficulties, lack of adequate legal representation, and the threat of severe penalties hanging over their heads. Some residents never even received notice of their hearing. LTB adjudicators, meanwhile, are political appointees rather than trained lawyers and many of them have direct links to the same real estate companies bringing eviction petitions.[7] Mayor John Tory and the Toronto Police Department, meanwhile, deployed municipal resources to enforce evictions and to destroy homeless encampments instead of prioritizing public health and the provision of shelter.[8] At the provincial level, Doug Ford’s conservative government passed Bill 184 – the misleadingly-named Protecting Community and Strengthening Community Housing Act – in July 2020, which actually made it easier to evict tenants. These policies are beyond hypocritical. They are cruel. They are systematic.

Toronto, then, is actually two cities – one comprised of predominately white, affluent homeowners and another comprised of predominately non-white, working-class immigrant communities of colour living under a dictatorship of unscrupulous landlords. Indeed, the profitability of real estate and widespread housing insecurity are interrelated, mutually constitutive phenomena, rooted in the transformation of Toronto’s low-income housing sector into a robust site of investment. Martine August locates the origins of this financialization or assetization of multi-family properties in the 1990s when federal and provincial governments abandoned social housing while slashing public subsidies for private, moderately priced apartments. The deregulation of rent-control amid this broader retrenchment of Canada’s welfare state only further eroded the availability of affordable housing in cities like Toronto. At the same time, elected officials eagerly subsidized the development of luxury condominiums.

These political maneuvers precipitated the transformation of multi-family properties into financial assets and a seemingly moribund sector gradually became fertile ground for speculation. Over time, a large percentage of Toronto’s housing stock – especially multi-family buildings geared towards low-income renters – fell into the hands of Real Estate Investment Trusts (REITs) and other commercial vehicles for pooling investor money. This financialization of the multi-family housing sector, August argues, exposed tenants to “extractive business practices that engender displacement.”[9] The goal of investor-landlords, of course, is to maximize profits while reducing operating costs. For tenants, this logic expresses itself as escalating rent, poor building maintenance and, at times, dangerous living conditions.[10] Lax enforcement of municipal and provincial housing codes only buttress landlord malfeasance.[11] Ultimately, a deregulated housing market incentivizes both the extortion and eviction of working-class tenants whose occupancy remains an obstacle to gentrification. Now, despite clear evidence that tenants in Toronto need rent-relief and a true moratorium on evictions, especially during a global pandemic, the municipal and provincial governments continue to sacrifice economically marginal communities on the altar of private property – especially real estate.

The picture is not all gloomy, however. Tenants from across the city are coming together to wage a collective battle for the right to remain in one’s home. Organizations such as Parkdale Organize, People’s Defense Toronto, Acorn Toronto, and the Keep Your Rent coalition are building a citywide tenant’s movement that is challenging Toronto’s eviction regime.[12] Rooted in a longer lineage of tenant organizing dating back to at least the 1960s, this activism is taking the fight to the doorsteps of slumlords – literally.[13]

In this context of dispossession and resistance, I asked Samuel Stein, author of the book Capital City: Gentrification and the Real Estate State (Verso, 2019), to help us make sense of the insidious matrix of capital, real estate, and human insecurity. The following post contains an edited version of our email conversation.

Max Mishler is an assistant professor in the Department of History at the University Toronto. He specializes in the transnational history of the United States, with a focus on slavery, abolition, incarceration, and the history of capitalism.

[6] Ontario has subsequently issued two similar moratoriums on eviction enforcement in January and April of 2021.

[9] August, “The financialization of Canadian multi-family rental housing: From trailer to tower,” 976.