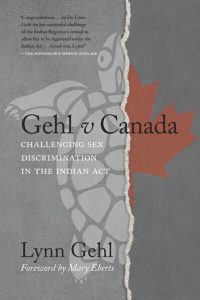 In 1994, Lynn Gehl applied for registration as an ‘Indian’ with the federal government. Unable to provide evidence as to the identity of her paternal grandfather, meant that, under the terms of the Indian Act, she was not entitled to registration, despite her paternal grandmother having status. What followed was a long challenge to the Indian Act in which Gehl challenged the federal government’s decision, claiming that s. 6 of the Indian Act, which covers unstated parentage, is contrary to the Charter of Rights and Freedoms. Over 20 years later, Gehl’s case was finally resolved, but it serves as yet another reminder of Canada’s colonial structures and the harm they impose.

In this episode of the History Slam, I talk with Lynn Gehl about her new book Gehl v. Canada: Challenging Sex Discrimination in the Indian Act, which follows her case through real-time articles she wrote over the past 30 years, as well as some contemporary reflection on the case. We discuss Lynn’s challenge of the Indian Act, the 30-year legal proceedings, and her role in challenging unknown and unstated paternity. We also chat about the colonial policies and their impact on Indigenous communities, contemporary questions surrounding Indigeneity, and the legacy of the ‘Famous 6’.

Sean Graham is an Adjunct Professor at Carleton University and a contributing editor with Activehistory.ca