PMTC Co-Organizer’s note: Unlike me, Erin has not yet had the opportunity to publish the initial piece of writing that inspired and was inspired by the Pandemic Methodologies Twitter Conference. We felt that this series was the right place to begin that process and ensure that her thoughts, writing, and emotions had a place. The unconventional, beautiful piece of writing that follows represents the state of mind and body that we, as co-organizers, colleagues, and friends, grappled with during the pandemic as we searched for ways to continue our work – while we continue to explore what that means.

Author’s note: I wrote this in the kind of brain fog or fever dream that makes time blend together. Chronology seems unimportant when every day under lockdown under grief feels the same. The disregard I show for the most basic of historical tools, the timeline, is done with all due respect to the role of narrative and smooth editing in historical writing. Traditional historical narrative, however, does not capture my current experience of time. The mess and confusion I have decided not to edit out, as you will see below, are a closer approximation.

I message a good friend and fellow PhD candidate over Facebook. He shares snippets of his annual review. I share snippets of this personal essay that I fatten and trim daily. Neither one of us talk about the other writing that hangs over us both besides to admit that the dissertations are coming along slowly, if at all. After writing myself into an existential crisis, my friend sends me an article about how historians can be vicariously traumatized by their research. Partway through reading it, Robert sees that I am online and FaceChats me from the hospital. He is bald and bloated and his conversation does not always make sense. He tells me that he met my Dad in 1920. At other times, he seems as rational as he ever was. He hangs up after saying “I love you.” I think about crying but don’t really feel like it. 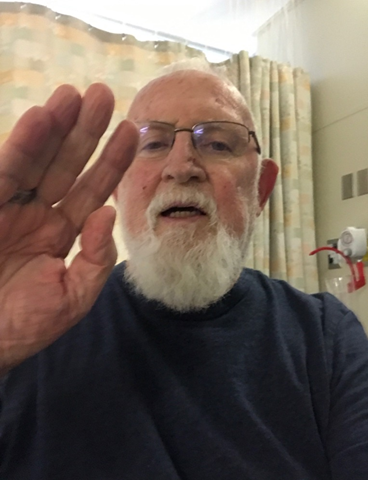 Selfie Robert took in hospital and texted to author on February 21, 2020. He is raising a hand in hello or goodbye.

I go back to the article. I read: “every day, sometimes for decades, historians open themselves, if not willingly then by a sense of obligation, to the pain of the past. Often, the present intrudes, exacerbating the trauma.” My present intrudes. This present where I cannot hug my immunocompromised, end-of-life Robert because of a global pandemic, but where I can connect with him, however dissatisfyingly, via text message and Facebook. If my present is intruding, exacerbating the compassion fatigue if not outright trauma of my research, how does that shape the research itself? What types of histories are we writing shut away behind our computer screens, doom scrolling and desperately trying to keep ourselves, our families, and our communities from shattering? How do we write history during a pandemic?

Am I just desperate to rename grief as generative? Make emotion rational, useful, publicly consumable? Why can I not just cry in private? Why must I convince you that this, too, is me being productive, is time well-spent? Am I writing this now because it must be written, because it says something true and thought-provoking, or because I want something in print and citeable for the annual reviews and job applications and scrutiny I see in the future? I can imagine the questions. Why did it take you so long to finish your degree? Why didn’t you publish more? What were you doing? And my answers. I was grieving. See Exhibit A as proof of my grief. See these citations; see how they support my argument that my grief was legitimate and, in the end, an integral part of my process. See me objectively scrutinize my own pain and come to the conclusion that I do, in fact, deserve compassion. See me perform productivity. See me subscribe to your ableist meritocracy.

What are the ethics of turning crisis into methodology?

Pandemic Methodologies as Mess
Pandemic methodologies are methodologies of mess. The neat, tidy research plan falls apart. Your mind, sharpened through the intense training of grad school, betrays you with brain fog. Your body is unruly, undisciplined. Your attention is fractured. You adapt, eventually, after months of mess, a messed-up sleep cycle, a messed-up work schedule. By “adapt” I mean you learn to live with it.

I have no doubt that, at some point in the future, when I look back on this, I will be tempted to paint the path as a logical progression, to ignore the brambled side roads I briefly wandered down before I had to turn back, to tell a story of rational choice-making. In retrospect, I always meant to take that detour. I will highlight the surprising successes and downplay the experimental failures. I wonder, though, what we might gain by giving space to our meanderings, even our least productive ones. This essay, too, is a fantasy that I buy into, a fantasy that organizes my mess, tidies it up for publication.

Yesterday I read about a father who was allowed access to his children but had to introduce his partner as a “friend.” His children, the judge determined, were too young to be told that he was gay. The two men would also not be allowed to share a bedroom during overnight visits. I think of being 9 years old, visiting my Dad for the first time at his new apartment, the strangeness of there being such a place as “Dad’s apartment.”

That first weekend, Dad was alone in the apartment, a sight that seemed normal at the time but rapidly became inconceivable. Dad was still singular in my mind. He showed us the unremarkable apartment, simultaneously claustrophobically small for energetic children and shockingly empty – empty of the presence and stories that glue to objects used repetitively over long periods of time – the red Sleeman’s dishcloth, or the small wood plank paintings Robert’s son made and we pried from trees at the end of the Winnipeg Folk Festival one year. Mostly it was still empty of Robert’s presence. His laugh. His boisterous chatter. His singing. Even his anger.

There were blankets neatly folded on the couch (I do not know if this detail is true or if my memory provided the props after the fact). Dad said he slept in the living room and told us about his new “roommate,” pointing him out in a painting of the Edmonton Folk Festival, one of the big hill in front of the mainstage, the city skyline in the background. There he was, on the hill, with his hippie-long white hair. “My roommate, Robert,” Dad said.

In my case, the fiction of heterosexuality was short-lived. By that evening, Dad had explained that Robert was not in fact just a roommate. I wonder if I had met Robert as a family friend, spent years in his company, and only then found out that my Dad loved him and slept with him, how would I have reacted? 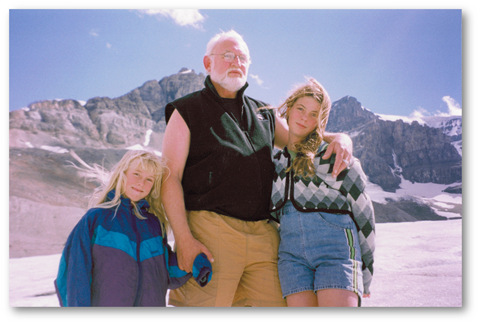 Family photograph of the author, her younger sister, and her second father, with the Rocky Mountains in the background. Robert has his arm around the author and is holding the younger sister’s hand.

It is 9:30 am and I’ve already run up against the limits of traditional historical methodology. I read the case. I took notes. I input details into a database I’m building for data visualization. And I’m left with a phantasmic sense of connection across time, a sense of connection that persistent and sticky ideas about historical objectivity subtly discourages me from exploring.

Pandemic Methodologies as Embodied
Which histories are carried by my body into the archives, onto the streets, online? I could tell you about how and when I recognized how dangerous the streets are; how, as a young adult, I would stay up late waiting for my Dads to come home, needing to make sure that they had come back to me alive. I could explain that I learned young to not trust that jokes are just jokes, and words won’t eventually end up in fists. Growing up, school friends telling me that the Dads were going to Hell, and college kids kicking one of them in the head because they were holding hands in public, were all of a piece. How far am I willing to push my body to write these histories?

My pandemic methodologies, the ones that will probably not be visible to casual readers of my dissertation (if such people exist), are rooted in grief, ill-being, and learning to live in the days before death. As I read about children and parents losing each other through heteronormative institutions like the Family Courts, I read-in the grief that the judges’ verdict does not record. It’s another fantasy of sorts, imagining that I can empathetically connect with my research subjects across time and through the very words that harmed them, but then all histories are built on fantasies and nightmares.

My therapist tells me to set aside half an hour this week to imagine what my response will be when death does occur. I had confided in her that I worry that my hyper-focus and seeming calm productivity is really a false front. That I am hiding from myself the continued depths of my grief. That I have become numb, and that at some point this façade will crack and I will have a truly spectacular breakdown. That’s when she tells me that I might try practicing feeling. Set aside a set amount of time and go through the scenario. He dies. How do I feel? What do I do? What’s next? I hesitate. The idea seems like catastrophizing, dwelling on negative thoughts I’ve always been told to push aside. Maybe I worry about jinxing myself and my family. My partner gently reframes it as “catastrophe planning,” like military simulations or fire drills. Here is the threat; here are the exits; here is the path to safety.

This should be added to the syllabus of grad school. Imagine everything goes wrong, as it probably will at some point; imagine there’s a global pandemic; imagine the research takes longer than they are willing to fund you for; imagine the sources don’t have the information you are hungry for; imagine the conference organizer forgets to shake your hand, you, the only young woman standing in a group of young men, the only one who is not offered a handshake; imagine the financial precarity, current and future job insecurity, and feelings of isolation drain you far more than your passion for the research and your love of learning fulfill you; imagine you don’t get the grant, don’t get accepted into the conference, don’t get offered the position. Imagine life intrudes. Practice feeling as if everything is going wrong. Know the warning signs. Know where the exits are. Know how to get to safety.

Dad calls just after 9 am and leaves me a message. “Call me,” he says, and it sounds like an ending.

Erin Gallagher-Cohoon is a PhD Candidate at Queen’s University. Her research analyzes the history of queer parenting and queer family formations in Canada. She has spent the pandemic thinking and writing about graduate student experiences.