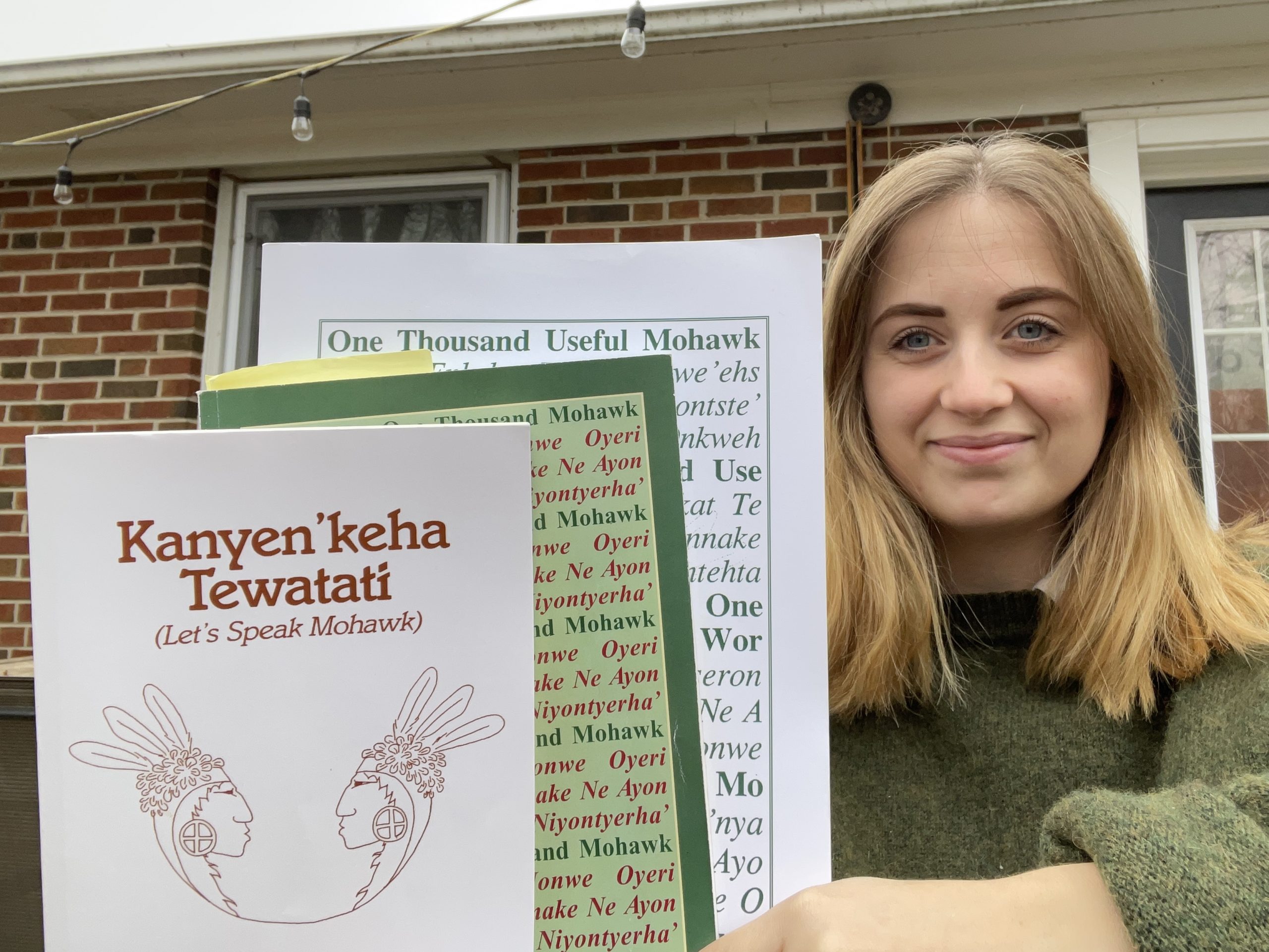 A few weeks back, I was presenting at a conference in Niagara Falls on some of my research that looks at the Haudenosaunee Confederacy’s longstanding, continual sovereignty, and the failure of the League of Nations in 1924 to uphold the rights of the traditional governing council in the wake of a Canadian military coup at Six Nations of the Grand River. The paper was one of my first attempts at integrating Kanyen’kéha (Mohawk) into my work as a settler historian. Not only is the title of my paper in both Kanyen’kéha and English, but I also began my presentation with an introduction in the language that paid my respects to both the audience and the land that I was visiting. I hope to do more of this in the future because I believe that it is essential for settlers, and particularly settler scholars, to participate in language revitalization movements. When we talk about reconciliation and restoring our relationships with Indigenous communities, we need to understand Indigenous worldviews and what it means to honour the true spirit and intent of the treaties that were established over the territories we call home, or conduct research in. Learning an Indigenous language is a powerful step towards doing so.

I’ve been learning Kanyen’kéha for a little over a year now. If I’m being completely honest, it all started because I needed two language credits to complete my undergraduate degree, and I thought: “Well, my French is terrible, so why not try out learning an Indigenous language instead?” I thought it would be helpful for my research since I’m interested in studying topics that look at the role settler colonialism has played in dispossessing Indigenous peoples of what are now considered Canadian lands and resources. I often find myself in conversations about treaties; thinking critically about the world we may have lived in if Crown authorities had honoured the terms set forth by Indigenous signatories—and what it would look like if we did the same today. Learning an Indigenous language, I thought, might help to prove my commitment to practicing decolonial research methods and for fostering new relationships with the Indigenous communities that I hoped to one day work with.

Learning an Indigenous language as a settler, though, is also kind of uncomfortable at times. There’s an obvious and justified sense of apprehension towards the subject in general. It’s difficult to enthusiastically support the idea of all settlers learning Indigenous languages without some consideration into how that might be a problem. There’s a long history here of settlers taking from Indigenous communities and not giving back anything in return. We have appropriated Indigenous beliefs, ideas, and knowledge, and called it our own. It is not appropriate to take up space in language classes that are meant to bring Indigenous languages back to Indigenous communities, or brand language revitalization as a good career-move for settlers in a world where “reconciliation” is merely a buzzword. It is different, though, to enroll in a language class at a university campus that faces chronic low enrolment and requires support from the student body to keep it running. It is also different to learn an Indigenous language in order to better support decolonization, and to reimagine a world where Indigenous and non-Indigenous communities can benefit from relationships of mutual co-existence and respect.

Learning an Indigenous language is also more than just for the benefit of being able to communicate with respect and good intentions. Similar to learning any second language, Kanyen’kéha comes with Haudenosaunee philosophies and worldviews that often juxtapose English. My teacher, Tehanyatarí:ya’ks, demonstrates this with the English sentence “I have a house.” In Kanyen’kéha, the closest translation to this is “wakenónhsayen,” which means “a house was set down to me.” In this simple translation, we begin to see how the language reflects Haudenosaunee belief systems: while in English, we “own” or collect objects and relationships, in Kanyen’kéha, we have a responsibility to the people or beings in our lives.

This is only one example, but it opens a world of new perspectives and ways to think about and see the world around us. Learning Kanyen’kéha has also made me reflect on how I use English to convey Indigenous perspectives. Take, for example, the common misconception that “Indigenous peoples had no concept of land ownership.” According to the Kanyen’kéha translation for “I have a house,” or more accurately, “a house was set down to me,” we can begin to see how Western conceptions of land ownership might be different from Indigenous philosophies of land stewardship. Saying “Indigenous peoples had no concept of land ownership” is not only inaccurate, but it also has racist connotations. The phrasing discredits Indigenous peoples’ title to the land and justifies terra nullius—the idea that European colonization was justified if “nobody” owned the land before settlers occupied it. It also purports the widely-held assumption that Canadian authorities acted honourably and with due diligence by fairly obtaining the “surrender” of Indigenous lands before claiming sovereignty over them. Not only does learning Kanyen’kéha help to teach me how to effectively communicate with Indigenous peoples about issues of decolonization and the return of stolen land, but in instances like these, it also helps me to reconsider how I communicate these topics in English, and how the biases I was taught can be engrained in the language I use.

After my presentation in Niagara Falls, an audience member approached me to assert, in the form of a question, the above statement: “But I thought Indigenous peoples had no concept of land ownership?” I took a deep breath and thought about all the times that Indigenous scholars and activists have probably had to respond to this statement to justify their work, and what it would mean for me, as a settler, to take on that burden and effectively communicate this seemingly basic concept of land stewardship to another settler. However, I also thought, and bluntly responded, that it would “all make a lot more sense if we were all speaking in Kanyen’kéha.” In that moment, it was like I had an epiphany that despite my doubts and reservations, my experience learning Kanyen’kéha did not take up space: it was making space. In order for historians, and the public at large, to have advanced conversations about decolonization and reconciliation, there needs to be a basic understanding of Indigenous perspectives and worldviews—and Indigenous scholars should not be expected to do all of the legwork to educate Canadians on how to be better treaty partners. Settlers taking part in language revitalization might be one effective step towards reconciliation, if done well, but it may also be one more step towards being able to have effective conversations about decolonization in academic circles and with the public at large.

Elizabeth McKenzie holds a Bachelor of Arts in History with Honours from Toronto Metropolitan University. She is a historian of treaties, settler colonialism and the environment in what is now called Canada.

Other perspectives to consider:

Chelsea Vowel. “Why Indigenous languages should be taught alongside French and English,” MacLeans (16 November 2017): https://www.macleans.ca/society/why-indigenous-languages-should-be-taught-alongside-french-and-english/