What can historians learn from engaging with Indigenous languages, and how can we do it in a respectful, reciprocal way?

Aanii Cathleen ndi-zhnikaaz. Toronto ndoo-njibaa. Hello, my name is Cathleen and I am a settler person living in Toronto and also a PhD candidate in the History Department at the University of Toronto.

Sara McDowell ndi-zhnikaaz. Toronto ndoo-njibaa. My name is Sara McDowell. I am a settler from Toronto and a graduate student at the Ontario Institute for Studies in Education focusing on Indigenous Studies.

LEARNING TO INTRODUCE YOURSELF IN THE LANGUAGE

You’ll see above that we started by introducing ourselves in Anishinaabemowin. Also called Ojibwe, Anishinaabemowin is one of the languages spoken in Mnidoo Mnising (Manitoulin Island) along with the closely related Odawa and Potawatomi languages.

After introducing ourselves by name we also explained where we come from, and what our purpose is in writing this blog post. In Anishinaabemowin, it is important to introduce yourself not just by name but also in relation to the land that you are from or to whom you belong (if you come from a particular First Nation, community, or clan).

At the 2018 MISHI, one of our first activities was coming together in a sharing circle to learn and practice introducing ourselves and others in the language. We did this every morning and by the end of the week most everyone could do it without looking at the handout! 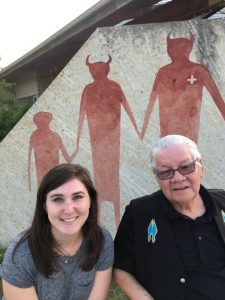 The Late Elder Lewis Debassige, MISHI Elder and one of the founders of the OCF, with Cathleen Clark in front of Anishinaabe artist, Carl Beam’s, entrance to the OCF. Photo credit Chandra Murdoch

The Ojibwe Cultural Foundation (OCF), where most of MISHI was based, is a very special place for learning about Anishinaabe language and culture revitalization. Today the OCF is a leading site of strength, resilience, and vitality for Anishinaabemowin and a home and partner to several revitalization and education programs. But as we learned at MISHI, it has also long been a site of resistance.

Like many of the over sixty distinct Indigenous languages in this country, Anishinaabemowin has been threatened through processes of colonialism and successive assimilationist government policies. Chief among these was the Indian residential school system, which sought to weaken not just Indigenous languages, but also Indigenous governance, ties to land, and ways of life. While at MISHI, we were privileged to listen to several elders who experienced residential schools firsthand and who also took part in the grassroots movement that helped bring the OCF into existence as a response to this long history of assimilation. 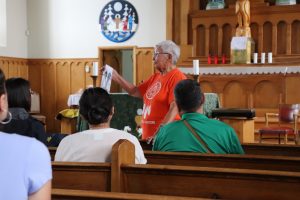 Rita Corbiere, talking to MISHI 2019 participants about her life experience as a former residential school student and as an educator. Photo credit VK Preston

The OCF came out of the 1970s era of advocating for First Nations controlled education, coupled with a push by young people in the community for more cultural programming and aided by supportive educators and teachers – many of them women who, after surviving residential schools themselves, went on to train as teachers to work towards more inclusive education models. In 1974, the OCF was officially founded to “preserve and revitalize the language, culture, arts, spirituality, and traditions of the Anishinaabe people of Mnidoo Mnising (Manitoulin Island) and surrounding areas.”*

In our short time there, the success of these efforts were apparent everywhere – from the conversations heard between fluent speakers, to the rich Indigenous art collections and exhibits, to the immersion Anishinaabemowin kindergarten classroom. As historians, we know the importance of learning about history in the place where it happened, and at the OCF we could clearly see the ties between the organization’s community-led activism and broader histories of Indigenous resistance and reclamation in Canada.

LEARNING ON THE LAND (& WATER) 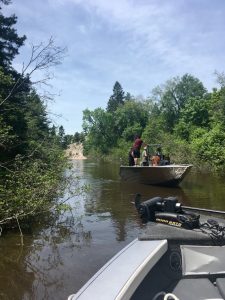 At the OCF, and on day trips around the island and the North Shore,  MISHI participants had a chance to experience language through multiple senses. We looked, listened, talked, created with our hands and walked the land. Through these experiences we learned about the close connection between language, land and story and their link to the Indigenous understanding of history rooted in place.  Professor Darrel Manitowabi, Laurentian University, explained:

On a walk with Professor Alan Corbiere of M’Chigeeng First Nation and York University, participants learned how the voices of the aadsookaanan, sacred stories, of the Anishinaabeg resonate in the place names. Alan took us on a walk at Michigiwadinong, Bluff in the Shape of a Spearhead, now the site of a popular recreational trail also called the Cup and Saucer. 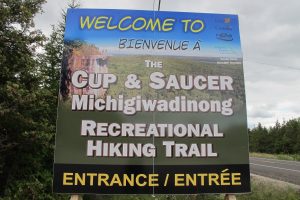 Alan recounted the story of the flight of Nanabush from the Haudenosaunee, and how he dropped his spear here, a story that he learned from the late Johnny Debassige of M’Chigeeng. As we listened and walked the land the spearhead rose up in front of us.

Alan told us about the support he had received from Marianna Lafrance, a settler and former Anishinaabemowin student of his, who helped the community get Anishinaabemowin signage at the site. This story was an example of reciprocity, showing how a settler language learner was able to give back to the community for the learning that she had received. Her language learning, and the relationship-building that it entailed, served as preparation for serving the community.

At MISHI we learned the importance that Anishinaabemowin plays in the relationship with land and identity. As members of a settler society which has disrupted and continues to disrupt relationships with language and with land through land theft, loss of life, resource extraction, residential schools, and taking children away from families, we learned more about our responsibilities to support Indigenous-led efforts to restore relationships with language and with land.

As our time at MISHI 2019 came to an end, Alan Corbiere explained that the word “mishi” in Anishinaabemowin means something “bigger than big,” something “humongous.” He suggested, with characteristic humour, that big things are expected from MISHI participants.

In the spirit of that challenge, we will take the lessons we learned at MISHI forward with us in our work as scholars engaged with Indigenous histories. And we encourage others to take up the call too!

If you are interested in learning Indigenous languages here are some things to keep in mind:

We would like to acknowledge and say kihchi miikwec/chi-miigwech to our collective language teachers, Professor Alex McKay, Professor Liz Osawamick, Professor Alan Corbiere, and Ninaatig Staats Pangowish, among others.

To hear and learn more about the language:

http://www.nanabush.ca (Walking and Talking with Nanabush, an interactive animated website with stories, produced by the OCF)

goodminds.com (GoodMinds.com, a First Nations-owned book vendor. A great source for books in Anishinaabemowin and other Indigenous languages.)

https://ojibwe.lib.umn.edu  (The Ojibwe People’s Dictionary, maintained by University of Minnesota)