When the news came out about the mass grave at Kamloops Indian Residential School located on the Tk’emlúps te Secwépemc First Nation – or the news from this past weekend which identified 104 ‘potential graves’ as part of the Brandon Indian Residential School on Sioux Valley Dakota Nation – I wasn’t shocked, I wasn’t in disbelief. While I was incredibly sad, I found familiarity in what was being announced, because for so long I’ve heard residential schools described as schools with graveyards rather than playgrounds. The loss of life – physical life, along with spiritual and cultural life – has long been part of the narratives of residential schools by members of Indigenous nations and was most formally “heard” by Canadians in the TRC final report that was published in 2015. As Kukpi7 Chief Rosanne Casimir said in the Tk’emlúps te Secwe?pemc press release: “We had a knowing in our community that we were able to verify… We sought out a way to confirm that knowing out of deepest respect and love for those lost children and their families…”. This briefing also identified that this work was the result of preliminary work in 2000, eight years before the TRC was established. 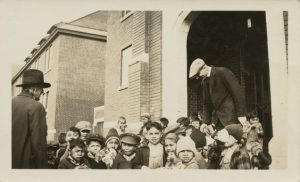 While many people are familiar with volume one of the Final Report of the Truth and Reconciliation Commission of Canada (the summary and Calls to Action), there are six full volumes of the report, one of which is dedicated to missing children and unmarked burials. This almost 300 page report explores 3,200 deaths identified by the TRC, while also recognizing that without the requested funds from the Department of Indian Affairs needed to complete the scope of work identified by the Working Group on Missing Children and Unmarked Burials (established in 2007), this report had “significant limits” on what was reported, “despite [the TRC’s] sincere belief in [the work’s] importance” (pgs. 5-6). Even the Chair of the TRC, the Honourable Murray Sinclair, estimated that the number of deaths at the schools could have been an upwards of 6,000, but that the Commission wasn’t able to do the research that could help them make this claim.

Canadians who have followed the TRC acknowledge that 150,000 First Nations, Métis, and Inuit children attended residential schools, and many did not make it home. So I question where the surprise comes from in the Kamloops discovery because, where did we think all the missing children went during the 150 years when the Government of Canada and Christian churches conspired to rid Indigenous peoples of land and life through the residential school system? How can we know a fact and be surprised by the correlated elements of that same fact?

I’ve been thinking a lot about Nêhiyaw poet & scholar Erica Violet Lee’s (@ericavioletlee) discussion with her therapist that she shared following the Kamloops discovery. One tweet that was part of her May 28, 2020 thread read:

“When Canadian sources state ‘the Indian children are presumed to be runaways from the residential school’ this is not meant in the sense of ‘running away from hell toward freedom’, but an appeal to the racist stereotype of the unchangeably nomadic, uncivilizable Indigenous being.”

I found familiarity when she said “Canadian sources state ‘the Indian children are presumed to be runaways from the residential school’” because I recognized the (implicit) Canadian assumption we have that missing students must have “ran away” from these schools. Does this thought follow that these “runaway” students made it back to their homes? We should recognize the implicit fallacy of this assumption, because even if these children were able to traverse the incredible distances between the schools and their families, there was also aggressive oversight held by Indian agents who could take the children away again.

So where did these missing children go? Are we assuming that children died along the way like Chanie Wenjack, and lay buried in an unmarked grave? But how would we be ok with that either?

“This same problematic ‘runaway’ discourse continues today regarding Indigenous children stolen into the foster system, as well as an attempted justification for high numbers of Missing and Murdered Indigenous Women, Girls, Trans, Queer and Two-Spirit people in canada and the u.s [sic].”

We, as Canadians, seem to be ok acknowledging certain elements of colonialism – it happened – without fully admitting the realities of death – direct and indirect death – that have, and continues to, be an experience for First Nations, Métis, and Inuit people on Turtle Island because of continued Canadian colonial rule. Death was the point.

If the grave site was shocking, you’re not going to believe that 73% of First Nations’ water systems are at high or medium risk of contamination; or the disproportionate, and growing, number of Indigenous peoples who are incarcerated in Canada; or that over half the children in the Canadian foster care system are Indigenous despite representing less than 8% of the under-14 population in Canada; or that the First Nations suicide rate is three times higher than that for non-Indigenous people, with youth particularly at risk; or that a recently announced national action plan related to Missing and Murdered Indigenous Women and Girls has no significant action in it.

The fact is, Canada was, is, and will continue to be a mass grave for Indigenous lives unless we, as Canadians:

Anishinaabe artist and educational consultant Georgina Riel/Waabishki Mukwa Kwe reposted Denton Beaver’s public May 29th Facebook post that read: “Turn up 50 bodies on a farm and its Canada’s worst serial killer. Turn up 215 dead kids in a schoolyard and it’s ‘whoops’.” However, I was also thinking that those 50 bodies on a farm – if we’re thinking of Robert Pickton’s Port Coquitlam farm – were also mainly of Indigenous women, many of whom, we can expect, to have faced trauma leading to drug use and risky sex work; trauma, again we may assume, coming from generational colonial practices and policies meant to exterminate these lives.

These are not isolated events. These are a continuation of the same event, and the shock of these experiences needs to end. As Ontario NDP MPP Suze Morrison, among others, wrote on Twitter on May 29th, residential schools does not highlight “a dark chapter” in Canadian history, but rather “the entire plot.”

As historians and history educators, how do we disrupt the cultural and historical narrative that leads to surprise and shock? How can we reroute these reactions to these disturbing realities in ways that make real change? As I published a year ago, if you’re not doing history to make change, then what else are you doing it for?

As part of our approaches to teaching Canadian history, we need to recognize our grand narratives and how they enforce colonialism, and then we need to disrupt them – actively intervene in them – with challenges to these narratives. Critical Race Theory calls these challenges “counterstories”: stories that “shatter complacency and challenge the status quo” (Richard Delgado, 1989, p. 2414). I have written about this as a method in my book, but there are many ways to engage in this work.

And note, this approach is more than just learning about “multiple perspectives,” although this can be a start. The notion of “multiple perspectives” can harken an equality-based approach to experiences, where a certain parity and rationality are expected in exploring an event. This is an approach to learning that sees equity as a process not a more radical product of education. Instead, I advocate for stories that forcefully cut through the grand narrative with voices and experiences that highlight different ways of being in the world to challenge the notion of an equal, objective, and fair world. Then, by being introduced to these challenges, we need to use this knowledge to move toward advocating and working toward real change.

Orange squares, tiny shoes, candles, flags at half-mast are nothing without a transformation in, and to, the conditions of the lives of Indigenous people. And while this type of systematic change needs to be funded by government, individuals can collectively force these changes. We can tell government leaders about the type of Canada we want for the 21st century. Remember that the TRC was funded by residential school survivors themselves as part of the Indian Residential Schools Settlement Agreement. The Canadian government did not lead this work, although they need to be responsible for it. People – Indigenous people in the TRC example – forced the government’s hand. This needs to be our work as settler Canadians: To force the government’s hand in engaging in the legal, moral, and ethical work that foregrounds the equity of Indigenous, Métis, and Inuit nations on this land. We need to be active in doing this work. We need to see this as our responsibility to do this work.

June is Indigenous History Month. Rather than staying in a place of grief and mourning, I recommend settler Canadians use this month as a month of action by advocating to the government for change, supporting Indigenous organizations, and learning about the long history of resistance and resilience enacted by Indigenous, Métis, and Inuit peoples and nations through the period of time we call Canadian history. Indigenous, Métis, and Inuit have known about the presence of these grave sites longer than settler Canadians have been outraged by them. Let not our rage, sadness, or surprise take over the remembrance and restoration of these histories and the responsibility we have for crafting a different, and more equitable future with the nations and peoples on this land.

Dr. Samantha Cutrara is a History Education Strategist and currently works in the Office of the Vice Provost Academic at York University as a Program Innovation and Curriculum Specialist. Her first book Transforming the Canadian History Classroom: Imagining a New ‘We’ was recently published by UBC Press. Find more information on her work, visit: SamanthaCutrara.com. Find her on Twitter at @DrSCutrara.