I have just completed a dissertation on the history of the Lower River Lea and West Ham on the eastern edge of London in the late nineteenth and early twentieth centuries. During years of research and writing I’ve looked at a wide range of sources from this time period including government documents, newspapers, photographs, maps, oral history interviews, civil engineer’s records and public health reports. Together these sources allowed me to know this area very well, but until today I’ve never seen film footage of the landscape from the late-nineteenth century.

Through pure serendipity I decided to write a post about historical films on the internet two days after the British Film Institute (BFI) uploaded a fifty-five second clip to their YouTube Channel of the launching of the HMS Albion from the Thames Ironworks Shipyard in West Ham. The HMS Ablion was one of the last battleships built on the Thames. This film records a major tragedy, as the launch created wave that capsized a jetty killing almost forty onlookers (it is not easy to figure out exactly where this takes place watching the film). While I knew about this tragedy, I was more captivated by this very short footage of the landscape I’ve been studying for more than five years. The abundance of smoke and smokestacks, the scale of the warship built near the mouth of the Lea and the huge piles of coal in the right of the frame all add to my existing knowledge of this space. This moving image, even of limited quality and length, is different from all the other sources I’ve consulted; it seems to bring history to life.

END_OF_DOCUMENT_TOKEN_TO_BE_REPLACED

We would like to extend an invitation to join the Mississauga Library System and ActiveHistory.ca as we feature a series of engaging history lectures. This is building on last year’s successful History Matters series with the Toronto Public Library and aims to continue and build an ongoing tradition of professional involvement with the broader community.

Below the cut, talk descriptions and abstracts follow. END_OF_DOCUMENT_TOKEN_TO_BE_REPLACED

“In nature, a child finds freedom, fantasy, and privacy: a place distant from the adult world, a separate peace.” Richard Louv, Last Child in the Woods: Saving Our Children from Nature Deficit Disorder (7)

In Last Child in the Woods: Saving Our Children from Nature Deficit Disorder journalist and child activist Richard Louv defends his argument about the need to reconnect children with nature with the assertion that “nature gives itself to children – for its own sake, not as a reflection of a culture. At this level, inexplicable nature provokes humility,” (9). Amassing a veritable barrage of pedagogical, sociological and medical research, Louv argues that we are losing touch with our environment, more particularly, the “natural” world. Louv argues that this trend is particularly alarming for children raised in the modern world of the internet, wireless technologies and other forms of rapid and instantly gratifying consumption. Louv argues that reduced time playing “in the wild” has resulted in what he calls “nature deficit disorder”: END_OF_DOCUMENT_TOKEN_TO_BE_REPLACED

The digitization of information, and the growing technologies used to manipulate and analyze it, is rapidly changing the context of the classroom. A couple of weeks ago Ian Milligan reported on the growing debate over the use of laptops and other technology (like cell phones) during class time.  Milligan makes a compelling argument for the importance of allowing students to use their computers in the lecture hall. Although I agree with much of what he has written on the subject, the use of technology in history courses poses a more complicated problem than simply addressing whether it should or should not be used: Where does digital literacy fit in the university curriculum and how should it be taught?

END_OF_DOCUMENT_TOKEN_TO_BE_REPLACED

27 January 2011, Holocaust Memorial Day, marks the 66th anniversary of the liberation of the Nazi concentration camps.

To commemorate this anniversary, the Auschwitz-Birkenau Memorial Foundation has launched the “Intervene Now!” campaign, designed to engage people around the world in order to preserve the remains and the memory of the victims and survivors of the German Nazi Auschwitz-Birkenau concentration and extermination camps.  After 66 years, the camp and grounds, along with thousands of invaluable historical objects, face accelerated and irreversible deterioration and natural erosion.

The campaign organizers are requesting public support for the conservation of this piece of history.  By never forgetting, we can better ensure that this never again happens.

Technology is used widely in the heritage field to increase accessibility.  Technology has facilitated the creation of publicly available history databases, an increased digital presence of heritage institutions, and the development of heritage specific digital tools. END_OF_DOCUMENT_TOKEN_TO_BE_REPLACED

I recently attended a conference about the state of African American studies at the Shomburg Center in New York City. Many of the panels were a traditional array of graduate students and professors presenting their own research. But several innovative panels discussed pedagogy in African American studies. I was thrilled by a presentation in which a professor spoke about how she was working through including New York City’s recent immigrant groups in her more traditional syllabus for African American history classes. The recognition that history has an important and complex relationship with the present and the future is integral if we as educators want to keep history “active.”

I was less than thrilled however when the next day I listened to a room full of professors complain about how they are “terrified” for today’s youth because they have no political activism, no sense of their community’s history, and even no taste in music. What is the world coming to when our students are listening to Willow Smith’s “Whip My Hair”? The End Is Nigh!! This discussion bothered me on two levels; it indicated that these professors had no sense of their own past (isn’t this the same thing your parents were saying about you when you were growing your hair long and listening to Rock and Roll and Funk?) and it reeked of the kind of mentality that makes history as inactive as possible for our students. END_OF_DOCUMENT_TOKEN_TO_BE_REPLACED 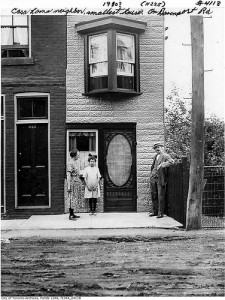 During the many hours I spent conducting research for my dissertation at the City of Toronto Archives, I was struck by the number of people who wanted to know the history of their home. Everyday, individuals came into the archives for the first time and quickly became engaged in the process of historical research: viewing and comparing old documents to answer questions based on change and continuity over time. Along with researching family history, uncovering the history of a home is one of the most common experiences that non-professionals have with archival research.  What explains the popular desire to know the history of a home? END_OF_DOCUMENT_TOKEN_TO_BE_REPLACED Slavery was one of the grossest violations of human rights and dignity in human history. It permeated, at one time or another, every inch of the globe: from the sugar plantations, and mines of the Americas, to the harems of the Ottoman Empire and the armies of the Sokoto Caliphate, slavery was an incredibly diverse and global institution.

Reduced to expendable chattel, slaves were divorced from their homelands, sold and bought, and forcibly taken to new sites of exploitation where, under the threat of violence, were made to work for the financial accruement of others. By various emancipatory decrees and proclamations throughout the nineteenth and early twentieth century, slavery gradually declined and eventually ceased to exist. Or did it? END_OF_DOCUMENT_TOKEN_TO_BE_REPLACED

I shall unburden myself this month by confessing to a past (though no less alarming) professional transgression and expose you, dear reader, to the very same charge at the same time: we are complicit in the appropriation of images without crediting the proper owners, arbiters, and originators.

We do this (and succeed) because our celebration of the written word is often eclipsed by an insatiable infatuation with the image. END_OF_DOCUMENT_TOKEN_TO_BE_REPLACED