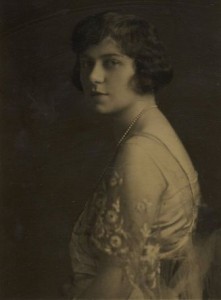 Who was Constance Margaret Austin (1894 – 1966)?  Her obituary doesn’t say: reporters emphasized her filial connection to James Austin (1813 – 1897), President of Dominion Bank.  Nor did she: Margaret left no diaries and the letters that she penned were lost.

But, Spadina Museum has charged visiting students with the task of finding out.  Their educational program on World War I teaches students how to utilize primary sources – photographs, report cards, newspaper articles and the like – and provides them with the skill-set to answer an “unanswered” question.

On 5 October 2011, a group of educators participated in Spadina Museum’s program as part of the quarterly Approaching the Past workshops, discovering both Margaret and an innovative teaching tool.

We began our learning journey upstairs in the children’s quarters.  Doug, our guide, informed us that Margaret (Margie) moved into the grand house, the children’s quarters, at 5 years old.  She had come from Winnipeg, MB, an industrializing city to Canada’s cultural epicenter.  Her father even built a golf and country club on their estate!  Margie’s parents promised her that when she became a lady, she herself could move into the adult quarters, visit the club, and become an active participant in city life.

But, Doug didn’t describe Margie’s pre-war life in detail.   He provided us with a base of information.  Then, Doug asked us to imagine, “What would life be like for Margie before 1914?  What sort of world did she live in?”

To help answer the question, Doug led us into the “Blue Room,” a space designed to inspire Margie and her sisters.  He pulled out a collection of primary documents, asking us to interpret their meaning.  My team was handed a postcard from 1907.  It depicted Avenue des Champs-Élysées. Margie’s 13-year old cursive informed us that she was staying close to “here.” 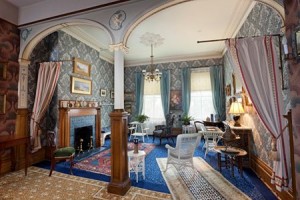 The postcard led us to the following conclusions:

We were right about her educational opportunities, but wrong to assume that Margie had a governess.  By cross-referencing our postcard conclusions with her father’s account books (Doug’s findings), we learned that Margie attended school in Eastonbury, England and took a stop-over in Paris, France.

As Doug’s students, we learned more about Margie’s journey to become a Toronto lady.  As educators, the activity reinforced the importance of hands-on learning: Spadina Museum structures activities so that students not only what happened, but how history is produced.  Doug showed us how different sources told different stories.  The importance of cross-referencing sources was highlighted by gaps in Margie’s life story that we identified and filled as a team. 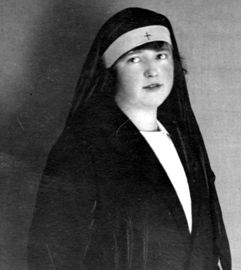 Unfortunately, Margie’s entrance into Toronto society was thwarted by war.  Her parents cancelled her debutante party out of respect for the soldiers, in support of the war effort.  Margie didn’t sulk in her party dress.  Instead, by 1917, Margie had travelled to England and volunteered as a Nurse’s Aide.  And, as part of Doug’s mission to have us learn about WWI through experience, we travelled “out of the house.”

Once settled in the screened-in veranda, Doug shared primary sources with the group, encouraging us to discuss Margie’s life during the war.  He showed us a picture of her in uniform.  “What can you say about Margie’s uniform?” he asked.

We stared at her nun-like garb.  And, we fell silent.  Doug resisted the temptation to micro-manage the group by answering the question.  He kept us in charge of our learning experience by offering encouraging prompts.  For example, Doug pointed at a cross stitched onto Margie’s headpiece.  “Are you thinking holy thoughts?” Doug asked.

His prompts kept us in charge of our learning experience.  Doug provided us with a clue, not an answer, thus sparking a lively conversation about the desexualization of female volunteers.  As Doug’s students, we concluded that WWI demanded a new set of prerequisites for our lady-in-training.  As educators, we learned that a museum tour could act as a launching pad for classroom discussions about changing women’s roles.

Margie returned home in 1919 and, after 20 – 30 minutes on the veranda, we followed Margie home, convening in the foyer.  Doug reminded us that 5 years had passed since Margie’s cancelled debutante party.  She would be forced to enter Toronto society as a “mature” woman.  Bad luck followed Margie it seems and there was an outbreak of Spanish Flu on the eve of her rescheduled soiree. Doug asked us to reconstruct Margie’s life after the war, asking us “Why is her obituary so sparse?”

Primary documents helped us to reconstruct history once again.  Reading the provincial government’s address to women workers showed us that women’s labour was devalued after the war.  Women were believed to be taking jobs away from veterans.  Her obituary was sparse (in part) because Margie’s service had no place in post-war society.

As educators, this conclusion was powerful because it reinforced that history is a vital experience.  History is not just a collection of facts that comes from textbooks.  Indeed, we could not learn about Margie in Bumstead’s Canadian Peoples. Instead, Spadina Museum’s activities reinforced that history develops with us as we live and work in “historic” environments.  We learned that our students could take charge of their own learning experience through a local fieldtrip.

Learning about Margie at Spadina House allowed us to imagine how WWI changed family life in Canada, how it modified women’s roles.  More importantly, it taught us that we could use museum tours to empower our students to build histories using primary sources.

A tour of Spadina House is an essential addition to any teacher’s toolbox.  It teaches both content and process (methodology) by allowing students to act like historians.  And, by acting like historians, students identify the power and value of their own analytical skills – skills that are not necessarily activated through reading assignments.

To arrange a tour for your classroom, please e-mail spadina@toronto.ca or telephone 416-392-6910.