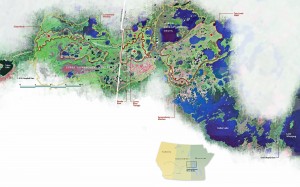 A few weeks ago, I was privileged to visit with Solomon and Renée Carriere at their home: Big Eddy Camp, northern Saskatchewan. If that seems like a vague description, it is. Few people would be able to find Big Eddy on any map, unless you are a canoe racer, dogsled racer, or know the Saskatchewan River Delta.  But if you, like me, love the art and craft of storytelling, Big Eddy might be your next travel destination. Let me tell you why.

The Carriere’s camp at Big Eddy is roughly fifty kilometres upstream (west) from the northern village of Cumberland House and downstream from the E.B. Campbell dam, on the main stem of the Saskatchewan River. Visit their website at: http://www.realadventure.ca/index.html

Big Eddy was created when the Saskatchewan River had a shelf, or ‘eddy’, that swirled at the edge of the river. It was an excellent place to fish. These days, the old eddy serves as a lovely open field in front of the cabins. In 2011, Big Eddy was full again with both water and fish – the direct result of the one-in-one-hundred year flood event on the Saskatchewan River. 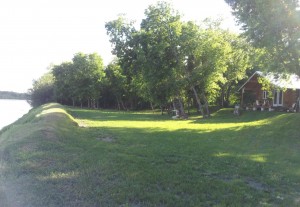 The remains of the big eddy, at Big Eddy Camp, near Cumberland House, Saskatchewan. Photo by Merle Massie.

Solomon, a world champion canoe racer, dog sledder and an avid YouTube creator, presents a wonderful series of videos of his travels and exploits at Big Eddy, the Saskatchewan River and surrounding delta, and further afield. You can find his work at kingsolvideo on YouTube.  My favourite character is the dog, Wilson!

You have to take a boat to get to Big Eddy camp. Or a canoe, if you are so inclined. In winter, access relies on ice and snow: the Carrieres often snowmobile or ski in and out of their home.

I visited the camp in the company of two other researchers from the University of Saskatchewan. We are each in various stages of research projects, all of which have some component that centers on the unique issues experienced by those living in the Saskatchewan River Delta. My own work, funded by Stockholm’s MISTRA foundation (The Center for Strategic Environmental Research), centers on flooding in the boreal forest. 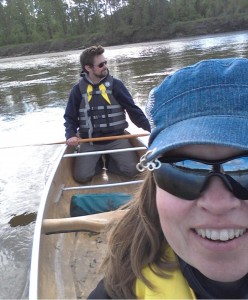 We visited Big Eddy Camp to meet with a wonderful and intrepid group of young canoeists. Renée, a teacher, advocate for environmental issues in the Delta and an experienced canoe guide (just a few of her accolades), had been guiding a group of students from Cumberland House on a canoe trip on the Saskatchewan River.  The phenomenal learning trip focused on seeing, hearing, smelling, feeling, and sensing the river and the delta that remains so important to the community of Cumberland House. After many days on the water, the group was resting at Big Eddy before their final push back to the village.

As all of our research has something to do with the river and the delta, we accepted Renée’s invitation to join them. In return, we offered our teaching services, and conducted class on the riverbank. 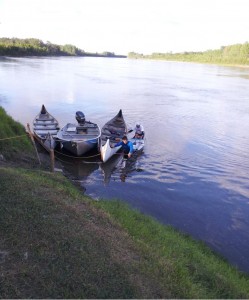 I drew attention to the purpose and power of storytelling. “Who is the best storyteller you know?” I asked. “RENÉE” they shouted, given her penchant for plying them with stories – both true tales and tall – throughout their days on the water. So I took them deeper – what makes stories good? Why are they important? They offered various answers, and we discussed the role of stories in helping us to shape and understand our world, and to share knowledge with others.

For me, though, the best lesson in storytelling came from Solomon. We spoke long into the late northern Saskatchewan evening and he related how stories help us travel.

“Travel? What do you mean?” I didn’t record the conversation between Solomon and myself, but it remains vivid in my mind.

“Well,” Solomon replied, “my grandfather told me stories of the places where he had lived and worked, where he had trapped. Some of these places were in Manitoba. I had never been there. But when I went there, the landscape was familiar. I remembered the stories and somehow I knew, I knew where I was and where I wanted to go and what I was going to find. I would know where there would be a good campsite, or which river path to take, or how long the portages would be. I was traveling by story. By the stories that my grandfather told me, about his experiences and those of his own father, my great grandfather.”

Traveling by story. Of course. The shape of the landscape, the warp and weft of the threads of stories created a tapestry of memory, a map of space and place that went beyond mere entertainment to tide kids through a day of paddling or trade yarns over an evening cup of tea around a fire. There was history, knowledge, maps, markers, warnings, lessons, love, safety and security built into those stories, carried through the generations and across time to Solomon.

I have been thinking about Solomon’s expression a lot, since. Much of what we do as historians is to create the stories that others will use to ‘travel by story.’ For example, moving through the landscape at Batoche National Historic Site in Saskatchewan, site of much of the 1885 Riel Rebellion, experience is immeasurably deepened and heightened by knowing the stories of the people who lived there, the events, and the results. Stories become intertwined with place and we walk through the landscape. At each marker, we not only ‘read’ the plaques, but ‘recognize’ the spatial components of the events of that long-ago spring. The more stories we know, the more familiar the landscape becomes. We can move through it with understanding and confidence and trust, traveling by story.

And now, you can all travel to Big Eddy; and when you do, you too will be traveling by story.