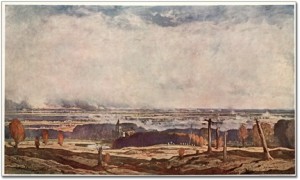 One thought on “Golgotha?: D. Y. Cameron’s Flanders from Kemmel”