Archival collections are put together through many individual actions and decisions made by many individual people, and those people, sometimes without knowing it, have a massive impact on how we understand the past.

Records (documents such as papers, correspondence, photographs, maps, recordings, and more) need to get into the archives before they can be available for researchers.

Records come to the archives in one of three ways:

None of these processes happen “naturally.” They all depend on human intervention. 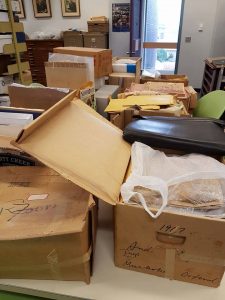 An unprocessed donation of records to Lakehead University Archives. These papers were kept in a home basement for decades until the house was being sold; they needed some care once they arrived.

It’s useful to make a distinction between “institutional archives,” which primarily preserve the records of a parent organization, and “collecting archives,” which preserve the records of people and organizations in their communities. The line is rarely strictly drawn: for example, Lakehead University Archives, like many other university archives, acquires the institutional records of the University itself, and also collects records of people and organizations across Northwestern Ontario. Government and business archives are often primarily institutional archives; community archives and those embedded in libraries and museums are often primarily collecting archives.

Most archives will have an acquisition policy or a collections mandate. This policy document will set out what types of records the archives is interested in acquiring. In many cases this will be set out in broad strokes, but provides a basis to choose to acquire records or turn them away. It is also very common for archives to cooperate with each other: each builds an area of strength while deliberately not competing for donations or purchases.

Some collecting archives will be much more proactive about identifying and acquiring records; others are much more passive. The approach that the institution (and the people doing the work) takes will have a significant, and cumulative, effect on which records they will be able to acquire, and which records will eventually be available for research.

For the rest of this post, I’ll be focusing on collecting archives, and “private records”, i.e., the records of people, families, or organizations, which have been donated to an archives.

First, the records need to exist. Someone needs to have created each document. Records creation may appear straightforward, but is dependent on so many factors:

Already, only a subset of people have created documents about their lives or work. The rest are silent, or only represented through the words and images of others.

Then, the records must be kept, intentionally, for years, decades, even centuries. Often there is a kind of “benign neglect”: documents are stored away in a quiet dark place, and forgotten about. At least as often, papers will be thrown away, or destroyed. 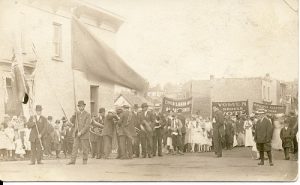 Labour demonstration in Port Arthur, 1914. The Finnish immigrant community played an important role in labour and socialist politics; records were kept within the community for decades before being gathered as an archival collection in the 1970s. MG8-D-4-57-H-I477

At some point, someone must make the decision to donate the records to an archives. They recognize the value of the records, but also no longer want to be responsible for their keeping. Often these donations coincide with the selling of a home, or after someone has passed away. But there is another necessary condition that the records not be sent off to recycling or the landfill: the donor recognizes their value, and is aware of archives (or museums, libraries, or historical societies) that will also value them.

Why might some people or organizations choose to donate records to an archives?

The pride that people have in their own history is amplified by the process of donation, of seeing the records accepted and described, and seeing them be used by others.

Others might make a conscious choice to not donate:

It’s a self-reinforcing pattern. Many archives have over the years collected records of primarily white, and primarily male, and primarily well-off people, which contributes to the impression that those are the only type of people whose histories are valued by that institution.

Some donors may be glad to fill in those gaps, seeing it as an opportunity to contribute to, for example, local women’s history, or local LGBTQ+ history. Others may instead read the signs that their records would be better taken care of elsewhere. (Records may be brought to a better suited institution, or kept in private hands.)

When archives collect only passively: taking in the collections that are offered to them, and nothing more, they further reinforce these inequalities. The types of records offered will continue to represent only a subset of the real population, and tell only a small part of the history. This limits the types of research that can be done.

Passive collecting may result from practical limitations: when there is so much to do and so little funding available, archival workers may focus on more pressing tasks such as description, and enabling current research. Space and facility issues also affect how the work of collecting and acquisition is done: it would be irresponsible to solicit new donations if the archives can’t house or care for them. But passive collecting may also be the result of uncertainty or plain inertia.

Many people working in archives are now taking on the challenge of collecting more proactively. It’s a long, challenging process, identifying the gaps and silences in our collections, questioning past priorities and decisions, building relationships with people and communities, raising public awareness of archival and historical issues, acknowledging past and present inadequacies and failures.

The archival collections that result from proactive collecting have the potential to be broader, more diverse, more representative, and allow for better research. They still will not be “complete,” will not represent more than a slightly larger sample of people’s lives and work.

The archives that we have are a result of innumerable small decisions made at different times, for different intentions, by individual people. This article hasn’t even broached the subject of how archivists appraise records, and determine which will be considered valuable or not. This topic is much larger and more complex, with no single clear consensus but thousands of pages of scholarship.

Sara Janes is University Archivist for Lakehead University. Her work includes making up for decades of passive acquisition, as well as teaching about archives, digital records initiatives, and a little bit of everything else.

3 thoughts on “Archives, Constructed and Incomplete”