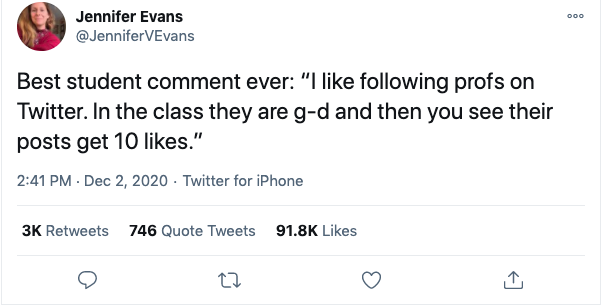 The students of HIST 5210, Carleton University

In just three days, this tweet was liked over 90,000 times. Responses varied from triumphant vindication (take that, students! So many more than 10 likes!) to moral panic (society is crumbling thanks to Twitter). Surprisingly few people recognized it for what it was: playful teasing between students and their professor as they wrapped up their last class of the term. As the students in question, we were fascinated by how academics on Twitter interpreted it as an example of how the digital environment was damaging to their status, or academia as a whole. Suddenly our seminar’s work, which focused on theories of power, took on added meaning. While none of us chose to do graduate school online, our class was proof you can create an online environment that fosters engagement and critical discussions. The best way to do so, from our perspective, was for the professor to let go of a need to protect their status and position of authority, and to encourage spaces of play.

If this were any other semester, we would be running into each other on the Carleton University campus and joking about the class, or chatting in the elevator about what we thought of the readings. But this year, our confinement to the Zoom classroom altered the dynamic of the graduate seminar. Talking on mic was an intimidating prospect, and working through our thoughts was made harder by the inability to read our classmates’ faces (Did they agree? Were we making good points? Was anyone even listening?). We found ourselves turning more and more to the chat sidebar, which allowed us to respond to what others had said and to give positive feedback. We also began to use the chat to make jokes, which felt  particularly necessary to get through analyzing Foucault. The chat became a space for personal anecdotes, tangents about the texts we were studying, and playful jabs at ourselves and each other.

On our last day of class, oddly, we found it hard to say goodbye. Despite all the doom-talk about Zoom University, we were ultimately able to create a learning environment that was both academically engaging and fun. It spoke, we thought, to our currently exacerbated desire for normalcy and connection. A university degree is meant to challenge you, to encourage you to critically examine your own preconceptions. And while it is supposed to be difficult, it can also be emotional. We wanted someone else to go through this with, and despite being confined to our bedrooms and basements, our desire for comradery was stronger still, and it emanated through the screen.

The responses were telling. Some saw what was play to us as insubordination and combativeness. Rather than riffing in the classroom space on the subject matter, the comment became a challenge to the traditional seminary form of education itself. After all, if students will only respect professors with Twitter cred, how doomed must future academics be!

One person likened it to the crisis of expertise more generally: “We have entirely failed as a society if the measure of worth of a person and their work is the number of likes their tweets receive.” Another lamented about the kids today: “Sad that children prioritize social media views over accomplishments and real life experiences.” (Interesting that many people assumed, or at least referred to the student as a “child,” rather than a fully grown adult).

Some on Twitter clearly considered banter and academic learning as opposites, but in fact, humour added depth to our discussions. In our class, play and learning were connected, even complimentary. The comment was a hallmark of our version of pandemic pedagogy.

The Tweet and its responses became a meta performance of what our seminar was about: power. From the beginning of term, authority was actively shared between all of us, and Zoom allowed it to flourish even further. The informality and capacity for humour in the chat propelled our semester-long discussion of Foucauldian notions of authority, privilege, and affect. Besides lightening the mood of our final class, this commentary made sense, and it built on our conversations about social media and its potential role as an authorizing force in academia.

As we discussed the reactions to the tweet, it became clear to us how important it is to have a professor that encourages students’ agency. Our side-bar discussions were never hindered, no matter how off topic they were, and never once were we critiqued for the ways we wanted to change the class format. The chat flourished in an organic way, but if our professor had not encouraged us, we would not have been able to create this playful exchange. Despite rebelling against traditional forms of communication in an academic setting, this only took off  because our professor followed our lead in the use of the chat function. Education in the digital world has not taken authority away from professors. It has made it all the more visible. Being confined to Zoom during a pandemic made it all the more important that professors give up that sense of towering authority, and be willing to learn together with their students.

The events in our Zoom classroom, and the virality of the tweet, highlight both the changing nature of the classroom, and what, to us, was the most significant component of collaborative learning: play. What the negative responses to the tweet miss is that when confined to the digital classroom, we also needed a space to speak back to traditional power structures in academia – a need normally fulfilled on the physical grounds of the university. The comments speak to a potential anxiety about the renegotiating of education and authority that the pandemic brought on, but in grad school, it has highlighted more than ever the need for collaborative learning.

For us, it involved bridging the gap between student and professor, fostering a relationship of trust and camaraderie through humour, understanding, and care. Deep learning and critical thought – the goals of any graduate program – are products of care and connection in which the needs of students are prioritized over mythic visions of professorial authority.

This post was written collectively by the MA students of HIST 5210, a graduate seminar on the theme of “power” at Carleton University. We’d like to give special thanks to the following contributors: Victoria Hawco, Ona Bantjes-Ràfols, Danielle Mahon, Danielle Carron, Leah Rasmussen, Alexander Baillie, Alexandra Pereira-Edwards, Arden Hody, Jennifer Evans, and Lorie-Ann Savard.

One thought on “Levelling the Playing Field: Humour in the Zoom University”