Shelter has its World Premiere tonight as part of the Toronto Jewish Film Festival. If you’re in Ontario, you can buy tickets to the virtual screening here. 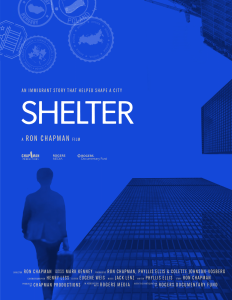 In the decade following the Second World War, the population of Toronto doubled, in large part because of a steady influx of immigrants. By 1971, the population doubled again to over 2 million, causing the city to expand geographically as the agricultural fields that surrounded the downtown core became part of the urban sprawl. Central to this was the expansion of the subway, near which developers to built high-rises, thus allowing more people to live within walking distance of mass transit. With immigrants from around the world looking for housing on arrival in Canada, these communities were diverse and held up as examples of Canada’s multiculturalism policy put forth by the Pierre Trudeau government.

While the housing boom created communities, the people behind the new developments created a community of their own. Many Toronto developers at this time were Jewish immigrants. Some had escaped anti-Semitism in Tsarist Russia while others were Holocaust survivors and those experiences shaped their careers in real estate development as they actively sought to create welcoming, loving communities.

This is the subject of Ron Chapman’s terrific new documentary Shelter. Using first hand accounts, it explores the lived experiences of a prominent group of Toronto real estate developers. It discusses anti-Semitism in Canada and Toronto before delving into the backgrounds of the people who helped shape the city. These include harrowing details of surviving concentration camps and escaping Nazi forces in Poland, which serve as powerful context to their later careers in Toronto. As they tell their stories, the viewer can see how real life experiences influence careers and, perhaps just as importantly, one’s perception of their professional life. As real estate developer and Holocaust survivor Mendel Tenenbaum says in the film, “I think I had the best life. And I also think I had the worst life that anyone can have.”

In this episode of the History Slam, I talk with Ron Chapman about the film. We discuss the origins of the project, the decision to go into detail about anti-Semitism in Europe, and immigration following the Second World War. We also chat about the development of communities, how personal experience shapes professional pursuits, and multiculturalism in Toronto.