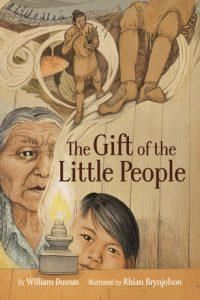 As a child, William Dumas’ father told him the story of European fur traders arriving on what is now commonly referred to as Hudson Bay. The encounter between the Asiniskaw Ithiniwak (Rocky Cree) people and the Europeans resulted in an endemic, greatly reducing the local population. In telling the story, Dumas’ father explained how elder âhâsiw procured medicine from the little people, who are legendary beings in the Rocky Cree tradition.

This is one of several stories included in the Six Seasons of the Asiniskaw Ithiniwak project, a collaborative effort to, among other things, share traditional stories and preserve the language. As part of the project, the story of the little people has been made into a graphic novel entitled The Gift of the Little People. Using his father’s voice as inspiration, Dumas, with over 25 years as an educator and storyteller, shares a story that is both timely and timeless in its significance.

In this episode of the History Slam, I talk with William Dumas and Warren Carriyou, who is part of the Six Seasons project. We discuss the contemporary significance of telling an endemic story in 2022 (5:29), how the project team has built trust (6:30), and the challenge of putting an oral story into text (9:11). We also chat about the book’s images (13:41), gearing stories towards younger audiences (15:55), and the power of traditional stories (23:10).

Sean Graham is a historian of Canadian broadcasting, an Adjunct Professor at Carleton University, and a contributing editor at Activehistory.ca