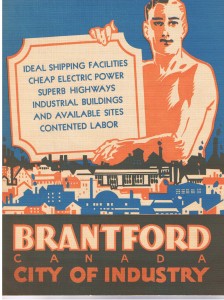 By the early 1900s Brantford, Ontario was the third largest manufacturing centre for exported goods in all of Canada, after only Toronto and Montreal.  Once known as the “Birmingham of Canada,” and the “Combine Capital,” Brantford’s reputation as a “City of Industry” was driven by a host of industries, especially agricultural implements.  Until the 1980s Brantford was a booming industrial city, boasting the highest paid factory wages in Ontario, including the auto industry.

But by the end of 1988 Brantford had lost two of its most significant industries, and unemployment in the city sky-rocketed to 24%.  Throughout the 1990s Brantford suffered the effects of industrial decline and decay.  Over 88 acres within the city were now abandoned and contaminated post-industrial sites or brownfields.

The Greenwich Mohawk site represents this history, from booming industrial hub to abandoned contaminated factory site.  At 52 acres it is the largest of Brantford’s brownfields.  For twenty-five years the Greenwich-Mohawk brownfield has loomed large in the community’s conscience as a horrible memory of Brantford’s industrial decay, and as a symbol of Brantford’s current problems and difficulties in moving forward.  In many ways the Greenwich Mohawk site represents the intersections between industrial history and environmental history, and how both shape a community’s understanding and appreciation of its own past and its current self-image.

Brantford’s economic development was spurned by the opening of the Grand River Navigation Company’s canal that linked Brantford by water to the Welland Canal and important cities like Buffalo.  In 1832 the Grand River Navigation Company began work on a system of canals, dams and locks along the Grand River in order to make the river navigable from Brantford down to Dunnville.  The “Brantford Cut” or “Brantford Canal” was the final part of the system to be built and opened to great fanfare in 1848.  This canal brought freight and passengers right into Brantford’s downtown and increased trade and attracted new businesses to the area.  Beginning in the 1850s Brantford was also quickly incorporated into the maze of rail-lines that soon linked it to places like Hamilton, Toronto, Port Dover, London, Buffalo, and Detroit.

Brantford’s industrial development began in earnest in the 1850s with a host of new industries including foundries, stone ware factories, stove factories and various mills.  From the 1870s to the 1890s Brantford became home to several significant agricultural implement manufacturers.  It was during this period that the agricultural implement giants Massey-Harris and Cockshutt were established in Brantford.  Starting in the early 1900s several of Brantford’s industries built larger new factories on what became the Greenwich-Mohawk site.  Industries on this site included: the Verity Plow Company (an affiliate of Massey-Harris, later Massey-Ferguson); Adams Wagon Company (an affiliate of Cockshutt that would later become the Canada Carriage and Body Co., then Brantford Coach and Body, and finally Trailmobile); Sternson Chemicals and the Cockshutt Plow Company.  Cockshutt built a new office and factory on the site in 1903.

These industries covered the entire 52 acre site.  Thousands of people worked in these industries daily.  And all around the site, in an area known as Eagles Place, a working class neighbourhood of charming brick cottages was quickly established.

The Greenwich-Mohawk site was a bustling industrial hub in what was a booming industrial city.  But this all changed in the 1980s.   Between them Massey-Ferguson and Cockshutt/White Farm Equipment employed over 7,000 workers in the early 1980s in a city of only 80,000.  But in 1985 Cockshutt/White Farm closed its doors in Brantford.  And in 1988, Massey-Ferguson also shut down its factories in the city.  After Massey-Ferguson, most of Brantford’s other major industries closed their doors throughout the 1990s and early 2000s.  Besides the social and economic problems of de-industrialization in Brantford there was also an environmental legacy: brownfield sites.  Brownfields are defined as “abandoned, idled, or under-used industrial and commercial facilities where expansion or redevelopment is complicated by real or perceived environmental contamination.” 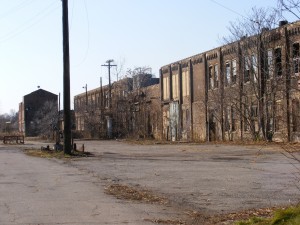 In Brantford the fifteen worst brownfield sites cover over 88 acres.  But the massive 52 acre Greenwich-Mohawk site represents to the citizens of Brantford the story of industrial decline and decay.  For residents of the adjacent Eagle Place area, once a thriving working-class neighbourhood, the Greenwich Mohawk brownfield is a daily reminder of all the lost factory jobs, and the social and economic consequences associated with this loss.  For the residents of Eagle Place the abandoned industrial site is also an environmental and public health danger.

There have been several dangerous fires on the site.  While the major industries on this site left in the 1980s and 1990s, other companies used the site in the interim.  In 1992 there was a disastrous explosion and fire at a recycling facility on the site.  Five years later there was a fire produced from 7,000 burning tires at an illegal tire dump on the site.  On account of the carcinogens benzene and toluene released from burning tires residents of Eagle Place had to be evacuated from their homes.  Several other fires occurred on the Greenwich side of the site in 2002, 2004 and 2008. 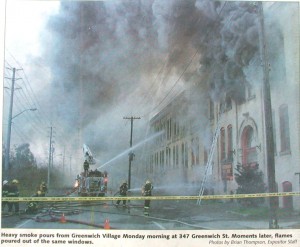 As with other post-industrial sites the Greenwich-Mohawk brownfield is contaminated with a variety of substances.  As early as 1976 there were reports of “oil-like” substances in the storm sewers and run-off from the brownfield site.  The Greenwich Mohawk brownfield is less than a kilometer from the Grand River.  There have been numerous environmental assessments and studies of the Greenwich Mohawk site starting in 1994.   Soil sampling and ground water sampling found several types of contaminants: Petroleum hydro-carbons from gas/diesel and heavy industrial oils; heavy metals like lead; xylene used in solvents and paints; toluene from paints and adhesives; polyaromatic hydrocarbons produced from boilers and generators; PCBs used in transformers, fluorescent lights, and capacitors; asbestos; and benzene produced as exhaust and in chemical manufacturing.  All these substances have lasting environmental impact on the soil and groundwater, and most of them are known to cause cancer and genetic damage in humans.  The sources of most of these contaminants can be traced back to the industries that operated on this site for decades without environmental oversight.  According to one of the environmental studies, “test holes dug over a large area of the plant show the soil is virtually saturated with oil.  A former employee of the Cockshutt Company testified that the company “disposed of waste oil and paint products on the soil.”  Other sources of contaminants include foundry sand, lead paint, and inground dip tanks.  Since the closures of the major industries in the 1980s, the Greenwich Mohawk site has gone from the industrial heart of the city, to an abandoned and toxic site, and a potential danger for all those living in its vicinity.

How can the city of Brantford and its citizens reconcile the history of this site with its redevelopment and future use?  Many in Brantford want to erase the physical remnants of the city’s industrial history, past greatness and more recent failures.  This sentiment was evident in the city’s recent decision to expropriate 41 buildings on Colborne Street, the main street of Brantford’s downtown.  According to many, these buildings represented the longest stretch of pre-Confederation buildings left in Ontario.  Despite a public and professional outcry in Brantford and beyond, the city last year demolished over 3 blocks of historic buildings in its downtown. 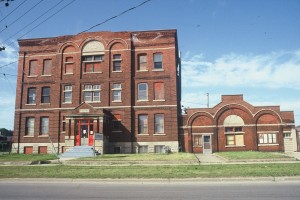 Many have expressed a similar desire to demolish all that’s left of Brantford’s industrial history.  In 2002 the 1903 Cockshutt Office Building, all that remains of the massive Cockshutt Plow Company factory, was threatened with demolition.  The Canadian Industrial Heritage Centre successfully fought the demolition and had the building designated under the Ontario Heritage Act.  However, five years later the new owners of the building, the City of Brantford, tried to remove the heritage designation to make way for the building’s demolition.  The Canadian Industrial Heritage Centre again fought to preserve the Cockshutt building, and successfully saved its heritage designation.

For nineteen months the city of Brantford worked on negotiating a deal with the development company Terrasan, which would see the remediation of the Greenwich Mohawk site and its redevelopment into housing, commercial space, and parks and green space.  The Terrasan plan also included the adaptive reuse of the heritage designated Cockshutt office building into an industrial heritage centre that would preserve and promote Brantford and Canada’s industrial history.

However, Brantford’s city council recently voted to end negotiations with Terrasan, leaving the future of the Greenwich Mohawk site and the Cockshutt building in limbo.  Once again there have been various calls to demolish everything on the site, including the heritage designated Cockshutt building, and eradicate the physical remnants of Brantford’s industrial history and the painful reminders of the city’s deindustrialization.  While heritage advocates in Brantford have raised the alarm over the Cockshutt building on the Greenwich Mohawk site, one only needs to look at the empty three blocks along the south side of Colborne Street in Brantford’s downtown, to be worried about the future of heritage in Brantford.

6 thoughts on “Active History on the Grand: The Greenwich Mohawk site and Community History”