I bought an iPad. Before you cheer or frown, let me tell you, I’m filled with an immense surge of guilt—not because my purchase left a hefty dent in my wallet, but because I have needlessly contributed to the e-Book revolution. As Thomas Hager explains,

Bottom line is stark: paper and ink books are on the way out. There, I said it. Printed books will still exist – like vinyl records still exist, in vanishingly small numbers, bought by collectors. Printed books – especially hardcovers — will become collectibles. Too many trends are working against print: (1) market economics (e-books are cheaper to produce, ship, and buy); (2) reader convenience (e-books offer immediate delivery, lower price, and bells and whistles like the ability to enlarge text); and (3) electronic infrastructure (a growing number of people are comfortable reading on little screens, they can do it on multiple devices (I just read my first book on my iPod Touch and the experience was fine), the little screens are getting better and cheaper and more attractive, the large-scale computing and communications systems are in place). And the technology just keeps getting better and cheaper. Three years ago, the first Kindle cost $399. Today’s improved version sells for half that. Eventually we’ll have screens you can roll up, put in your pocket, and unfurl as you lay on the couch, like the evening paper (but in full color, with video, web access, and no ink stains). END_OF_DOCUMENT_TOKEN_TO_BE_REPLACED 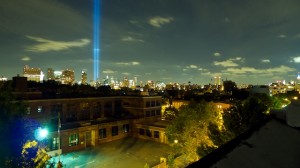 Today I write this on 12 September 2010, one day after 11 September 2010, and 9 years after 11 September 2001. In the midst of my first year of living in New York City, this date has caused me special occasion to pause and to take note of the nine year anniversary as I get to know the neighbourhoods and residents of this city. While the events of 11 September obviously had a global impact, the people of New York City have a special relationship to this date and they choose to commemorate it in a myriad of ways. This past Saturday witnessed a number of memorial services at churches, firehouses and an official ceremony at Zuccotti Park near the WTC site. There were also many other events across the city including poetry readings and a floating lantern ceremony at the Hudson River put on by New York’s Buddhist community. Many of these ceremonies were inter-faith and all welcoming, a message that may have been overlooked by a media more closely focused on the controversy over the proposed Islamic center blocks away from Ground Zero. END_OF_DOCUMENT_TOKEN_TO_BE_REPLACED 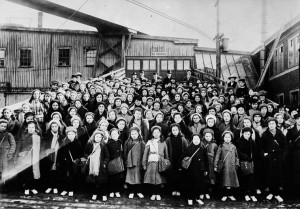 The stamp, designed by Debbie Adams of Adams+Associates Design Consultants, contains three images: the SS Sardinian, on which home children migrated from Britain to Canada; a photograph of a home child engaged in farm labour; a portrait of a newly-arrived boy passing through Halifax en route to Hamilton.  The young boy, looking directly at the camera and whose image is enclosed by a metal frame, emerges as the main focus of the stamp.  Such a visual device is intentional, as Adams notes that the frame represents the “relationships” home children developed in Canada: “It shows that someone cared enough about this child to preserve and display his image.” END_OF_DOCUMENT_TOKEN_TO_BE_REPLACED

4) Petition: Preserve Pennhurst State School and Hospital as a memorial to the past.

8) This week in the Active History blogosphere!

END_OF_DOCUMENT_TOKEN_TO_BE_REPLACED 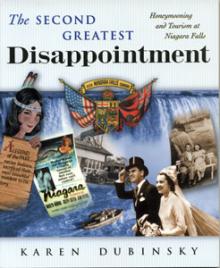 ActiveHistory.ca is happy to announce that it has published its second book review written by an individual outside the academy.  Mitch Primeau, a teacher living in Toronto who was raised in Niagara Falls, provides his thoughts on reading Karen Dubinsky’s The Second Greatest Disappointment: Honeymooning and Tourism at Niagara Falls.

We want to expand our book review section.  If you are a non-academic who is interested to review a historical work for ActiveHistory.ca, please contact us at info@activehistory.ca

HISTORY 2.0: HISTORIANS AND THE NEW MEDIA

The co-coordinators for the Active History/Histoire Engagée CHA Working
Group are calling for papers for a proposed round table for the CHA
Annual Meeting to be held in May of 2011 in Fredericton, New Brunswick.

Our proposed round table, will, we hope, trigger wider discussion about the
current opportunities and challenges that new media provide historians
working in a discipline that is undergoing significant change. Media
forms such as blogs, online journals, personal web sites, podcasts and
online conferencing abilities have, in many ways, democratized and
diversified how historians engage with each other and the wider public. END_OF_DOCUMENT_TOKEN_TO_BE_REPLACED 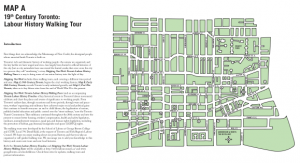 Take a walk from The Don Drewery, learning about the United Brewery Workers and their victory for a city-wide union label, down to the Distillery District and learn about William Gooderham’s paternalistic relationship with his employees. Maybe you’ll then pass through the St. Lawrence Market, stopping for a tasty snack while contemplating the history of workers’ rallies on the site, before finishing up at a plaque at Yonge and King commemorating the failed 1872 Printers’ Strike, the Nine Hours Movement, and the subsequent Trade Unions Act – part of the story of Labour Day! These would be just a few stops on the recently unveiled 19th Century Toronto Labour History Walking Tour. On Wednesday, September 1st, “Mapping Our Work: Toronto Labour History Walking Tours” launched. END_OF_DOCUMENT_TOKEN_TO_BE_REPLACED

After a month long vacation, AH Announcements is back!  The following upcoming events may be of interest to our readers (click on ‘continue reading’ below for full descriptions):

4) This week in the Active History blogosphere!

END_OF_DOCUMENT_TOKEN_TO_BE_REPLACED

Toronto has a rich brewing history. This is a fact. I got my first glimpse into this history in 2007 in my early days working with beer. At that time, I did some work for Oliver Dawson on the Old Toronto Beer Tour. This daylong tour explores Toronto’s current breweries as well as the remnants of older breweries and various locations that were significant in Toronto’s brewing past. In preparing to guide the tour, I was delighted to learn about Toronto’s history and to explore Toronto in a new light. I was even happier to have the opportunity to share these discoveries with the various people who signed up for the tour. END_OF_DOCUMENT_TOKEN_TO_BE_REPLACED 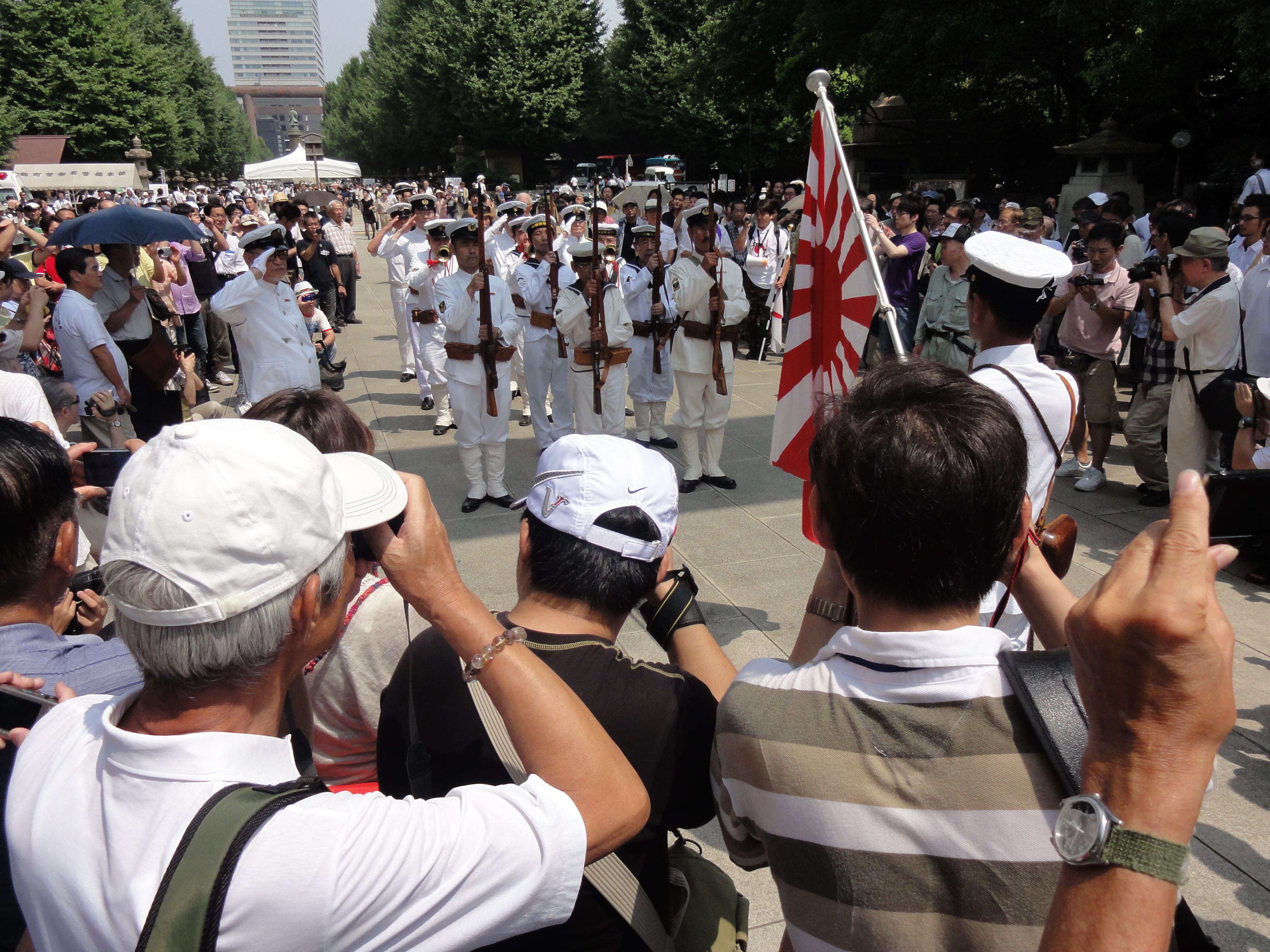 On 15 August, the spirits of some 3 million Japanese soldiers and civilians who were killed in World War II come home.  Most of the remembrance ceremonies for the war dead are private.  However, there are much more public ways of remember people who not only died for their families but also as a sacrifice for the welling being of the nation.  On 15 August, the spirits of the dead are coaxed to join people in more complex, raucous spaces of memorialization.  On this day, the Yasukuni Shrine complex serves as an important space for this kind of memorialization.  Built in 1869, the shrine lists the names of some 2.5 million Japanese war dead from 1869 to 1945, including 14 Class-A war criminals who were enshrined in 1978. END_OF_DOCUMENT_TOKEN_TO_BE_REPLACED