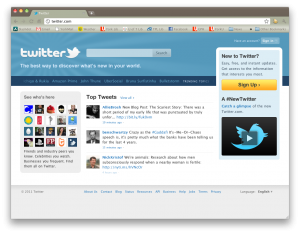 When I first heard of Twitter in mid-to-late 2006, it sounded inane. 140 characters seemed restrictive for text (SMS) messaging, let alone as a means to communicate over the internet. We have e-mail, I probably snidely dismissed, and then went back to predicting the eminent end of Facebook. It wasn’t really until 2009 that I realized I had been wrong.

It was at the Great Lakes THATCamp, where co-editor Jim Clifford and I went to Michigan Sate University, that I saw the power of an ad-hoc network. By adding the hashtag #THATCamp, your message went to everybody following that particular tag. You didn’t have to be friends, you didn’t have to know each other, but you could carry on conversations throughout the Conference. Have you ever sat in one panel at a large conference and wondered what was going on in the next room over? Whether there were opportunities for cross-talk that were simply gone because the programme committee decided a certain way? Wished that you knew where people were congregating for an ad-hoc debate on historical materialism, or social history, or whatever? During the G20 in Toronto, following the #g20 hashtag quickly let you realize what was going on, where protests were, where police were, and painted a disturbing picture of quickly eroding civil liberties. And, of course, the recent events in the Middle East and North Africa continue to demonstrate the organizational powers of twitter.

But enough of that. How could an instructor use Twitter? This is me thinking out loud here – something that I hope to try next year as a TA.

Firstly, you have to get students to sign on at the start of the class (day one). Put it on the syllabus. Demo how it works on the first day of class. Like everything that you do involving digital humanities, we have to assume that digital literacy levels are very low. Take them to the twitter.com homepage, show them how to make an account (maybe make your official course account at this time), and demonstrate a few trending issues. Say you’re running a class on sexuality. Why not see what the current debate on #circumcision is? Could academics play a role in informing debate?

This is probably the most crucial point. As Sean Kheraj pointed out to me via Twitter, there just aren’t enough people bought into Twitter.

Secondly, encourage your students to use it during class. In a large lecture hall format, if a student thinks something is cool or has an interesting point, it may not be feasible to interrupt the flow of a lecture for every comment. At schools like York University, I also suspect there’s a culture of passivity in the lecture hall. So get them to put comments up, attached with a hashtag, say #HIST1000 [or whatever your course code is].

Imagine how gratifying it would be to see: “Wow, just learned a neat point in my #HIST1000 class about X,” questioning an issue, or even asking for clarification from peers. The problem is, if only one or two or even ten students have bought in, this would be a boring conversation. Hence the importance of that introductory lesson on day one of the course.

Most importantly, however, it would continue the conversation outside of class. At York University, a commuter campus located on the periphery of Toronto, I’m continually shocked by the sheer level of student alienation. Many students note that they have difficulty making friends, as they rush from class to class, worry about making bus connections, and face such large classrooms that peer interaction is so limited.

So imagine: asking for lecture notes if somebody couldn’t make it? Having difficulty finding a reading? Forming ad-hoc study groups? Complaining about the reading? Even complaining about the instructor! Sure, we have Moodle and the occasional course blogs. But those quite frankly, aren’t conducive to off-the-cuff communication. They’re coldly, resistant to customization, and really only provide a venue for a course forum.

Finally, as Sean mentioned in a tweet, it might help students follow your research. Let them see what you do, get insight into the daily life of a researcher, the questions asked and considered. And even if you just reach one or two students, what a difference that might make!