…they still kill us [and] take our children…

I moved to Fredericton in 2001 to take up my first tenure-track position. I was hired to teach courses on Canadian politics at the University of New Brunswick. I was an uninvited “guest” on Wolastoqiyik and Mi’kmaw territory covered by a 1725 peace and friendship treaty (such treaties do not cede land).

Shortly after, I was asked to join a research project on “urban Aboriginal policy.” The fieldwork for the study drew my attention to the Shubenacadie Residential School, which was built on Mi’kmaw lands at Sipekni’katik and operated from 1929 to 1967.

I thought that the newly digitized “School Series” records of the Department of Indian Affairs might hold information about the Dominion of Canada’s role at the school in relation to urban labour market training.

Why did I think, in this political context, that inquiring into urban employment dynamics was a reasonable question to pose with respect to the Shubenacadie Residential School?

Lee Maracle has said that “[t]o be a white Canadian is to be sunk in deep denial” (2017, location 283 in the digital edition). Denial might nurture in oneself a sense of innocence, as Maracle says, but it is by no means “innocent”.

This point has been driven home to me after reading Daniel Rück and Valerie Deacon’s Active History post on how denial is the “eighth stage of genocide.”

Indigenous scholars and survivors of the genocide of course know more than I could ever know.

I write this reflection to join the chorus of those challenging rampant genocide denial, including where it endures behind closed doors of settler-colonial classrooms in post-secondary education.

It shouldn’t have taken me this long.

I broke through denial by reading Shubenacadie Residential School records, roughly fifteen years after first hearing about the existence of residential schools.

Pulsating with evidence of violence against children – abject cruelty, including sexual violence, murderous intents, and deaths – the records showed that officials of the Dominion of Canada were well aware of this violence, did nothing to stop it, and expressly sanctioned brute force against children, including the very young and the frailest.

To the office of the Prime Minister, officials were willfully complicit in this genocidal violence, violence that implicated and continues to implicate those who turn away or deny it.

I found myself contemplating the significance of the “pan-territorial residential school system ideal.”

For me, this term conveys the geopolitical purpose of the schools, which included militaristic dimensions.

A pan-territorial residential school system ideal began to be pursued over the last two decades of the nineteenth century.

It was first articulated in 1879 by Nicholas Flood Davin, who had been commissioned by John A. Macdonald to report on the use of residential schools in the United States. Davin favourably assessed their use as a “civilization” strategy, and lauded the “soon [to] be universal” system.

He recommended the immediate opening of four schools in the Dominion but noted that an “extensive application of the principle of boarding schools” would have been preferred if the Indigenous Peoples were not “so largely migratory” (Davin, 1879, pp. 2, 9-11; see also Murray, 2017, p. 753).

Davin proposed this plan in the context of the “disappearance of bison in the wild” that led to widespread famine among Indigenous Peoples’ communities. Many Indigenous People were starving to death (Daschuk, 2013, Chapter 7). Davin found benefit in this context, seeing the threat of starvation as a potential tool to entice parents to relinquish control of their children. They might be given an “additional ration of tea and sugar” for sending their children to school, he said (Davin, 1879, p. 15; Murray, 2017, p. 754).

The Dominion of Canada was angling to be recognized as a “modern” state after the war. Modern statehood was being defined in the emerging international system as the ability of a state to govern a national territory by consent.

First Nations’ refusals stood at odds with these criteria.

Until 1920, no residential school operated north of Carcross (Chooutla), which sat on the southern-most part of the Yukon about 100 kilometers from the Alaska border.

Until 1929, no residential schools existed east of the Mohawk Institute, which was located on the lands of the Six Nations at Brantford, Ontario.

Over the course of the 1920s, three new schools opened near the north-western most border of the presumed legal land base of the Dominion, and the Shubenacadie Residential School opened close to the south-easterly edge.

As the system extended into these diametrically opposite regions, the residential school map inched toward a pan-territorial form.

In the early years after World War I, there was an express alignment between the pan-territorial ideal and genocidal intent. In 1926, the notorious Duncan Campbell Scott confessed that when a residential school was opened in the Maritimes, “one of the desires of [his] official life [would] have been accomplished” (Murray 2017, p. 754). This comment needs to be placed in the context of his remarks two years earlier, when he declared that the Dominion’s objective was “to continue until there is not a single Indian in Canada that has not been absorbed into the body politic and there is no Indian question, and no Indian Department” (Starblanket, location 282 in the digital edition).

Building a residential school near its presumed legal boundaries, the Dominion would be sending a message to the world that it was governing a contiguous territory. In this, the materiality of the schools and their ideological expression would function as a sort of flag in the soil to convey a sovereign claim. At the same time, the sequestering of Indigenous children could be used to dissuade dissent and resistance (Murray, 2017, p. 754), thereby allowing the Dominion to construct the appearance of consent.

I have asked myself, then, is it even appropriate to use the term “students” if, regardless of any provision of “education,” the system was set up in a way that allowed children to be used as pawns, human shields, and, dare I say, prisoners, with many dying as a result?[1]

But what of the third phase of residential school expansion, which began in the late 1940s and ended in the early 1970s?

This phase was sharply visible in the most northern reaches of Canada’s presumed legal land base, especially along the waterways roughly from the Beaufort Sea to the Northwest Passage.

Twenty of the 33 schools in the Yukon and the Northwest Territories opened in the wake of the passing of the United Nations Convention on the Territorial Sea and the Contiguous Zone in 1958. The Convention reflected heightened contestations over sovereignty in the Arctic (Lajeunesse, 2017, pp. 85, 210, 2368). The building of new schools, as before, aligned with the Dominion’s desire to assert its presumed sovereignty on the world stage.

Significantly, 24 of the 33 schools were set up after the 1948 passing of The United Nations Convention on the Prevention and Punishment of the Crime of Genocide (Genocide Convention). Article II of the Convention states that genocide involves acts:

committed with intent to destroy, in whole or in part, a national, ethnical, racial or religious group, [including by] a) Killing members of the group; b) Causing serious bodily or mental harm to members of the group; c) Deliberately inflicting on the group conditions of life calculated to bring about its physical destruction in whole or in part; d) Imposing measures intended to prevent births from within the group; [and], e) Forcibly transferring children of the group to another group (United Nations General Assembly, 1948).

Canada, as many have pointed out, was indeed forcibly transferring Indigenous children to settler-colonial authorities in the Yukon and Northwest Territories (and indeed elsewhere) at a time when the Genocide Convention was in force.

The question of military calculations also needs further attention because, with one exception, every residential school set up in the Yukon and Northwest Territories was in a location that, in 2015, had a direct Canadian military presence, as Table 1 shows. Clearly, this table raises questions that deserve answers.[2]

Source: The information on residential schools was drawn mainly from the National Centre for Truth and Reconciliation’s (University of Manitoba) website, with supplementary information gathered from the Indian Residential School History and Dialogue Centre’s website (University of British Columbia). Information on military patrols was compiled from Adam Lajeunesse’s The Canadian Armed Forces in the Arctic: Purpose, Capabilities, and Requirements (2015, p. 6). 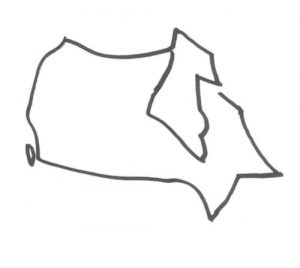 Figure 1: Sketch of Outer Boundaries of the Residential School System, circa 1971. Source: Sketched by Karen Bridget Murray and based on the Truth and Reconciliation Commission of Canada’s (2011) map of residential schools.

The pan-territorial ideal remains relevant to the question of genocide today because, as Cindy Blackstock, a member of the Gitskan First Nation, has compellingly argued, the residential schools “morphed” into the child welfare system, with “more First Nations children being in state care than at the height of residential schools” (Blackstock, 2007, p. 72).  These contemporary dynamics are not exclusively local or regional. They are national – pan-territorial – found across Canada’s presumed legal land base.

Teaching and Learning for a Post-Genocidal World

I would like to take the discussion back to the question of “education ‘after’ residential schools,” which is the title of the Active History series of which this essay is a part.

Tamara Starblanket (2019) writes that denial is the “greatest challenge to overcome in proving the crime of genocide” because it permeates “oppressive dominating and dehumanizing framework[s] internationally and domestically” (location 426 in the digital edition).

What this means, among other things, is that teaching and learning in the state of denial is not innocent.

It is part of the crime.

I end my reflection with a land acknowledgement. I acknowledge that I have written this two-part reflection while living on lands at Tkaronto. These lands have been taken care of by the Huron-Wendat, Anishinabek Nation, the Haudenosaunee Confederacy, Métis, and, the current treaty holders, the Mississaugas of the Credit First Nation. This territory is subject to the Dish With One Spoon Wampum Belt Covenant, an agreement to peaceably share and care for the Great Lakes region.

As a settler-colonial, these are self-congratulatory salutations unless I am teaching and learning to end genocide, which plainly requires seeing it, not turning away from it, and not denying the truth of it.

Karen Bridget Murray is Associate Professor of Politics at York University. This article draws upon and extends analyses she first developed in “The Violence Within: Canadian Modern Statehood and the Pan-Territorial Residential School System Ideal,” which was published in 2017 in the Canadian Journal of Political Science.

She express her sincere appreciation for exemplary research assistance provided by Ryan Kelpin, doctoral candidate in the Department of Politics at York University.

[1] I am indebted to philosopher Clinton Debogorski for conversations on the appropriateness of the word “student” in this context.

[2] I extend appreciation to historian Martha Walls for alerting me to the fact that more needed to be known about the relationship between residential school lands and military lands.

[3] The shifting contours of this pan-territorial residential school system ideal map are visible for all to see on the National Centre for Truth and Reconciliation’s home page (https://nctr.ca/map.php).

Daschuk, J. (2013). Clearing the Plains: Disease, Politics of Starvation, and the Loss of Aboriginal Life. Regina: University of Regina Press.

Davin, N. F. (1879). Report on Industrial Schools for Indians and Half-Breeds. Report Prepared for the Government of Canada. Ottawa. Retrieved from https://archive.org/details/cihm_03651/page/n5

Knockwood, I. (1992). Out of the Depths: The Experiences of Mi’kmaw Children at the Indian Residential School at Shubenacadie, Nova Scotia. 2nd edition. Halifax, NS: Fernwood Press.

Lajeuness, A. (2015). The Canadian Armed Forces in the Arctic: Purpose, Capabilities, and Requirements. A joint publication of the CDFAI, the School of Public Policy, and the Centre for Military and Strategic Studies. Canadian Global Affairs Institute. Retrieved from https://www.cgai.ca/canadian_armed_forces_in_the_arctic#canadas

Simpson, A. (2016). Reconciliation and Its Discontents: Reconciliation in the Age of Sorrow. (Recorded lecture). Saskatoon, SK: University of Saskatchewan.

Truth and Reconciliation Commission of Canada. (2011). Map of residential schools. Retrieved from http://www.trc.ca/assets/pdf/2039_T&R_map_nov2011_final.pdf