By Catherine Carstairs and Philip Rich

As restaurants across the country closed in March to prevent the spread of COVID-19, fast-food chains stayed open. In the first quarter of 2020, McDonald’s Corp global sales decreased by only 3.4%. This is remarkable given that McDonald’s had to close over 300 stores in China as well as restaurants in France, Italy, Spain and the United Kingdom. In Canada, according to research from Ipsos Foodservice monitor, drive-through dining was up by 17% in April. Apparently, the explosion in sourdough bread-making barely made a dent in the demand for burgers. 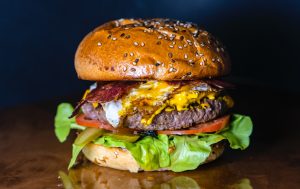 As Andrew F. Smith explains in his book, Hamburger: A Global History, the hamburger started as a sandwich. As factories mushroomed in American cities, lunch wagons fed the workers easy-to-eat meals including sausages and hamburger steaks, served in a bun. In the 1920s, the first hamburger chain, The White Castle, began opening in the United States. After World War II, the McDonald brothers who had long operated a drive-in burger bar in California began to standardize and speed-up their processes. Ray Croc, who had formerly sold multimixers for milkshakes, stepped in to expand their franchising operations, subsequently turning McDonald’s into a global brand.

Fast food hamburgers were slow to come to Canada.  A&W led the way, opening its first store in Winnipeg in 1956. A decade later, A&W had 200 stores across the country. Harvey’s opened its first restaurant in Richmond Hill in 1959. Macdonald’s did not open its first store in Canada in Richmond, BC until 1967. In 1970, there were only 29 McDonald’s outlets in Canada, but 307 Kentucky Fried Chicken Restaurants, 237 A&W’s and 76 Harvey’s Hamburgers. By the early 1990s, McDonald’s had taken a definitive lead over other burger joints, although A&W, Harvey’s and Burger King still had significant market share. Of course, the biggest fast food outlet in Canada is not a burger outlet; it is the coffee and donut shop, Tim Horton’s.

Thanks in part to the exploding fast food market, beef consumption reached new highs in the 1970s, although it has fallen substantially since then. In the late 1970s, the price of beef rose substantially.  Nutritionists and public health experts urged consumers to eat less red meat for their health and by the 1990s, there was growing environmental awareness of the costs of beef production.

Even so, the number of fast food outlets skyrocketed. As family incomes declined, mothers joined the workforce in ever-increasing numbers, and the divorce rate rose, there was less time to cook at home and to prepare bagged lunches. Today, McDonalds has 1400 outlets in Canada, more than double the number they had thirty years previously. A&W has 950 restaurants. While the figures for Canada are unknown, in the United States, 60% of all beef is consumed in the form of ground beef.

People living in lower-income neighborhoods are more likely to have easy access to fast food.  Public transit ridership has plummeted during the pandemic, making it more likely that people will seek food closer to their homes. McDonald’s and other burger outlets continue to provide excellent caloric value for one’s food dollar.  Many Canadians have been pressed for time and money during the pandemic. Many lost their jobs. Others were juggling home schooling while working at home.  Both children and parents are coping with new stresses. The McDonald’s slogan “you deserve a break today” has never rung so true.

Our taste for burgers has come at a cost. Nearly 1000  workers at a Cargill plant in High River, Alberta tested positive for COVID-19 – believed to be the largest single outbreak in North America.  Two have died. The father of one worker became another casualty of the outbreak. There have been additional outbreaks at Cargill and JBS meat plants in Brooks, Alberta, Guelph Ontario and Chambly Quebec.

How did it come to this? By the mid-twentieth century, union activism had turned meatpacking into a well-paid and stable job in both the US and Canada. For much of the 20th century the Canadian industry was controlled by three corporations (Canada Packers, Burns Meats and Swift Canadian) and a master union contract assured high wages and safer working conditions throughout the industry. But beginning in 1984, working conditions and proper wages rapidly declined. Burns Meats was the first company to challenge the master contract negotiated by United Packinghouse Workers of America (UPWA), and other companies quickly followed suit.

The economic downturn in the 1980s and the reduction in red meat consumption allowed companies like Cargill and Gainers to opt to cut costs in order to remain profitable. Work on the line sped up.  Meatpacking plants across Canada began hiring cheaper immigrant and migrant labour, reducing wages for workers, closing plants, employing strike-breakers and opening new non-unionized plants that paid a lower wage. Today, at the Lakeside Packers Plant in Brooks Alberta, 50-75% of the workers are immigrants or temporary foreign workers. The pressure from plant operators was strong enough that the UFCW abandoned master agreements in the hope of keeping plants open.

Today, as Michael Broadway has shown, working conditions in the Canadian beef industry remain brutal.The turnover rate for line workers can be anywhere from 6 to 8 percent monthly. In 2010, a study showed that meat processing workers in Alberta had the “highest probability of a disabling injury among all manufacturing employees in the province.” Unions in the industry are weak.  Although the UFCW pushed for better PPE, and Ontario and Alberta have now mandated proper PPE for frontline meatpackers, these protective measures have come to late for the workers infected, and in some cases killed, by COVID-19.

The hamburgers widely available in low-income neighborhoods have now played a role in making some of those same workers sick. The growth of income inequality in Canada, the decline in well-paid unionized jobs, and the consolidation of corporate power, have come to play out in who becomes infected with COVID-19. Canada can do better and has done better. Hopefully, COVID-19, and the clear inequalities it is revealing, will encourage governments and corporations to do more to keep workers safe and healthy.

One thought on “What’s the Beef with COVID-19?”